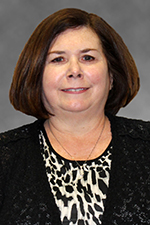 Diane Cunningham Redden was appointed as a Trustee of the Library on April 27, 2018 by the Hamilton County Common Pleas Judges. She will fill the unexpired term ending October, 2023. Ms. Redden currently serves as Board Secretary, Chair of the Operations Committee, and on the Human Resources and Development Committees.

A graduate of the University of Cincinnati, Cunningham-Redden recently retired from a career working for LION Group, an Ohio company with a focus on military and public safety equipment manufacturing. At retirement, she was the Director of the CBRN PPE division. Cunningham-Redden has served on numerous boards and committees including the Ohio Governor’s Council on Aging Advisory Board, SHELeads Hamilton County Board of Directors and is the Hamilton County Municipal League Administrative Director. She is also the Chairwoman of the Hamilton County Republican Party and a resident of Evendale.