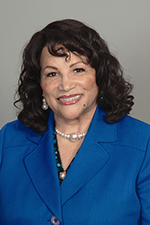 Ret. Judge Allen received a bachelor’s degree from The Ohio State University and a Juris Doctorate from Capital University Law School. She served as a Hamilton County Court of Common Pleas Judge from 2009–2016 and as a Hamilton County Municipal Court Judge from 1985 and 1987–2009. Before that, she was Trial Counsel for the Hamilton County Public Defender’s Office and the Legal Aid Society of Cincinnati. She formerly sat on the Board of Trustees of the Cincinnati Bar Association. Retired Judge Allen is currently the Chair of Historian & Protocol of the National Drifters Inc. and is on the Executive Committee of the Ohio Black Judges Association where she serves as the Chair of Continuing Legal Education. She also was appointed to serve as an Ohio Supreme Court Judicial Instructor on Fairness and Access to Courts and a Mentor Judge. Her recognitions include the 2022 “Who’s Who” Marquis Lifetime Achievement Award, City of Cincinnati Outstanding Woman’s History Award, National Presidential Outstanding Volunteer Service Award, YWCA Women of Achievement, NAACP Lifetime Service Award, Outstanding Woman of the Year from the Cincinnati Women’s Political Caucus, and Talbert House's Agnes Seasongood Award for public service in the health and human services field. She is a resident of the beautiful Village of Evendale and a proud mother and grandmother.

“I have always loved libraries,” said Judge Allen. “From the age of eight years old, my family and I walked more than a mile in gleeful anticipation of getting books to read! I am very enthused about joining the Board of the Cincinnati & Hamilton County Public Library, and supporting the great services it provides to the whole community. This library surpasses my expectation of the services that a library provides to the public.”