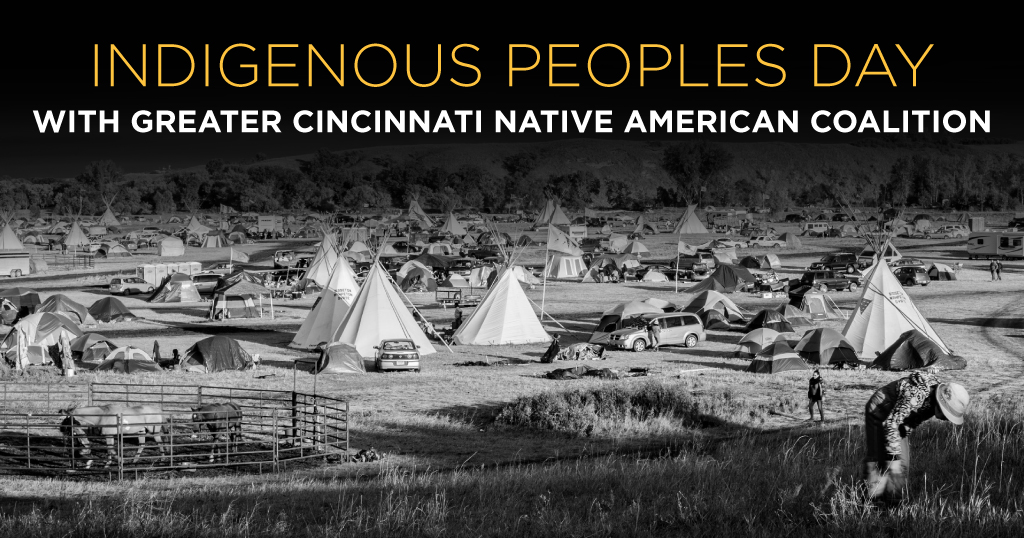 The city of Cincinnati is built on unceded Native land that has belonged to Indigenous peoples since time immemorial. The Shawnee and Myaamia were the caretakers of this land before their violent, forced removal. Sacred earthworks of great spiritual and ancestral significance were spread across what is now the Central Business District and the surrounding neighborhoods. A large crescent-shaped earthwork once stretched all the way from Vine Street and East Central Parkway to 12th Street in Washington Park. It, along with all of the others, was destroyed in the late 1700s to early 1800s to make way for the construction of the city.

Why Do We Celebrate Indigenous Peoples Day?

Indigenous Peoples Day is a day to acknowledge these hard truths, the broken treaties, and the forced removal of Indigenous people at the hands of the U.S. government and its citizens who stole land that was not theirs to take. It is also vital that we recognize the original stewards of the land we now occupy and where they are now as a result. This is part of a step towards healing and reconciliation with Native communities.

On October 3, 2018, Cincinnati City Council passed a resolution officially recognizing the second Monday in October as Indigenous Peoples Day. This moment was a long time coming. Activists from local Native American community organizations like the Greater Cincinnati Native American Coalition, American Indian Movement (AIM) of Ohio, AIM Chapter of Indiana and Kentucky, and others fought for this change for years, putting the pressure on City Council as early as 2014.

The first city to officially declare Columbus Day as Indigenous Peoples Day was Berkley, California in 1992. Cincinnati joins the 11 states and 128 other cities, opens a new window who opted out of celebrating Columbus Day since then and replaced it with a celebration of the nation’s diverse Indigenous peoples, who represent 573 federally recognized tribal Nations and many currently unrecognized tribal Nations.

Christopher Columbus and the “Doctrine of Discovery” that his 1492 voyage represents marks the global invasion of Indigenous lands and the beginning of the systematic European colonization and genocide of Indigenous peoples that ensued over the following centuries through disease, forced removal, and ethnic cleansing.

The oversimplified history some children are taught in school about Columbus is largely false. Columbus didn’t “discover” America. In fact, he didn’t “discover” anything. He landed in the Bahamas while looking for Asia. He proceeded to enslave many of the Taíno people he met upon his arrival on their land in Hispanola (Haiti) and unwittingly spread an untold number of diseases that decimated Native communities.

The celebration of Columbus Day glorifies European mythology while ignoring the experiences of Indigenous peoples at the hands of Columbus and figures like him. It also erases the continued cultural vibrancy, resilience, and traditions that live on with Native Americans today despite these atrocities.

Resources for Today (and Every Day!)

One way we can honor Indigenous peoples of the past and present is to educate one another on Native history, Native triumph, and the struggles Native communities face today. The Greater Cincinnati Native American Coalition, opens a new window (GCNAC) has graciously allowed us to share their curated list of resources, opens a new window for people of all ages and backgrounds who want to learn more about Indigenous peoples.

GCNAC is a group of organizations, churches, individuals, and others who support Native American and Indigenous treaty and human rights, as well as racial issues on a local and national level.

It is their mission to preserve and represent the cultural heritage of Native American, Indigenous, and First Nations people; to provide education, advocacy, and support on contemporary Indigenous issues and cultivate knowledge about Native American history in local and regional communities. You can learn more about joining them in their mission by visiting their website at gcnativeamericancoalition.com, opens a new window.