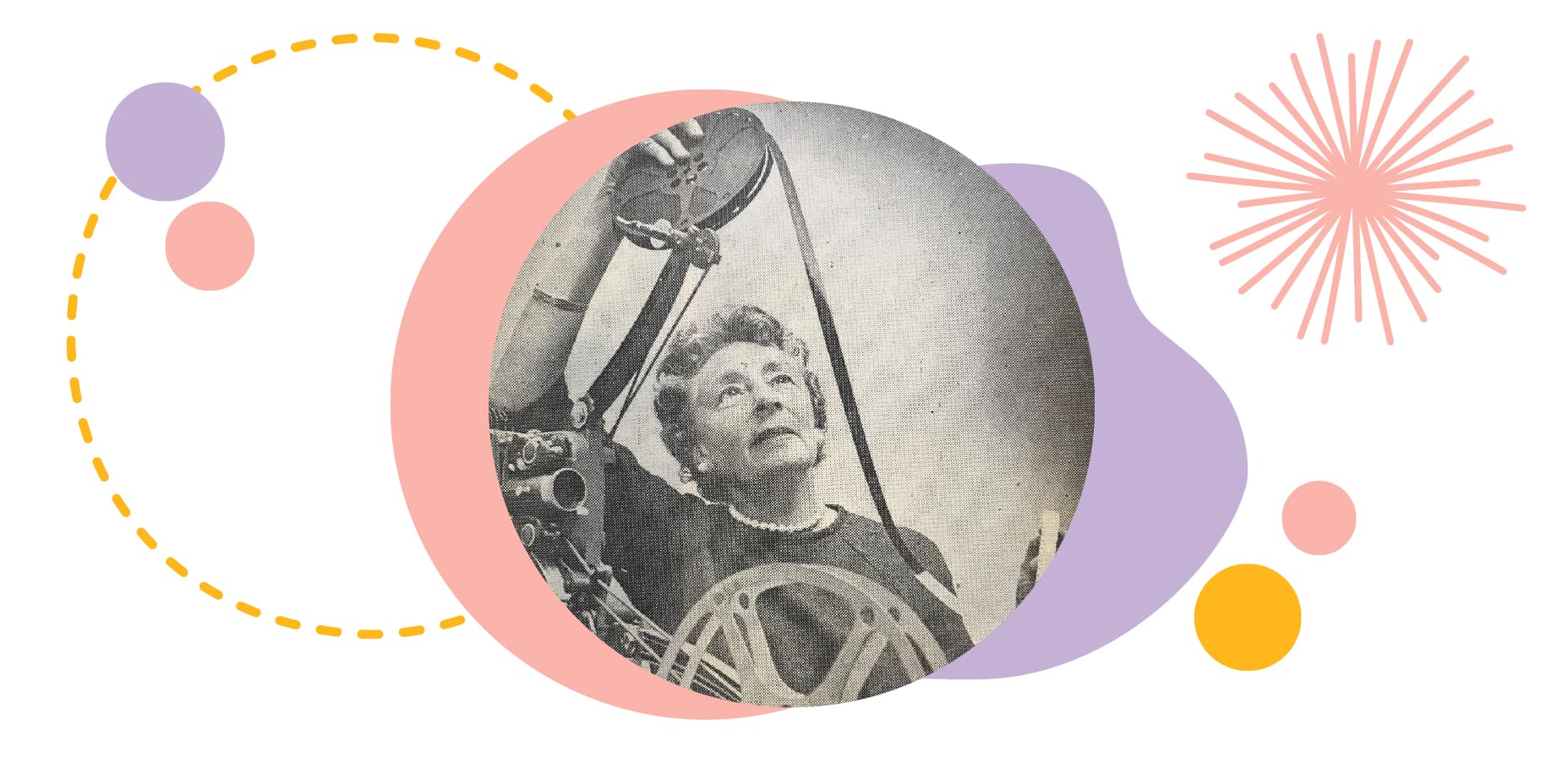 This year marks 75 years since the Films and Recordings Department started service at the Downtown Main Library on March 27, 1947. It was one of the first departments of its kind in America.

To celebrate, staff members of its successor, the Popular Library, have planned Music at Noon, opens a new window and birdwatching events, opens a new window in September and October in tribute to that department’s founder and CHPL Hall of Fame Member, Karline Brown.

In the rapidly changing years following World War II, Brown recognized that CHPL customers were interested in materials beyond print items such as books, maps, sheet music, and newspapers. She thought the Library should also make available material that offered sight and sound. The legacy of her vision has lived on beyond her era of records and 16-millimeter films. Over the decades, the Library continued to offer audio visual material in ever changing formats; audio tapes, video cassettes, compact discs, audio books, DVDs, Playaways, and Blu-ray discs.

Karline Brown, a graduate of Walnut Hills High School, earned her bachelor’s degree at the University of Cincinnati in 1915 in liberal arts, social science, and French. With a lifelong interest in art, music, education and nature, she became a world traveler while engaging in public relations, magazine promotion, and freelance writing in New York. After she received her Master Degree in Library Science from Columbia University in 1940, Brown returned permanently to the Queen City to begin work at CHPL.

She became a staff member in the Fine Arts Department, where she conceived the idea for a new department that could be part of the educational program of the library. In 1946, She conducted a nationwide survey of what other libraries were doing in the audio-visual field, which revealed that 28 libraries were offering either recordings or films and more were planning to add such departments.

Brown approached Carl Vitz, the newly appointed director of the Library, and said, “Books aren’t enough. We need films and records. Most libraries don’t have them - let’s be pioneers.”

Vitz supported her idea but due to the cramped quarters at the original Downtown Main Library building, the only available space for the new collection was a room on the second floor in the Library Annex, located behind the Main Library in a back alley called College Street. She started with 27 films and 115 records with a staff of one - a desk clerk. She began making the rounds of clubs and parent groups to tell them of the new collection and promoting the department in the local newspapers and on radio stations. By the early 1960s, the Films and Recordings Department would grow to 1,300 films, 12,000 records and 10 staff members. Brown also made available for lending a collection of Kodachrome film strips and slides. 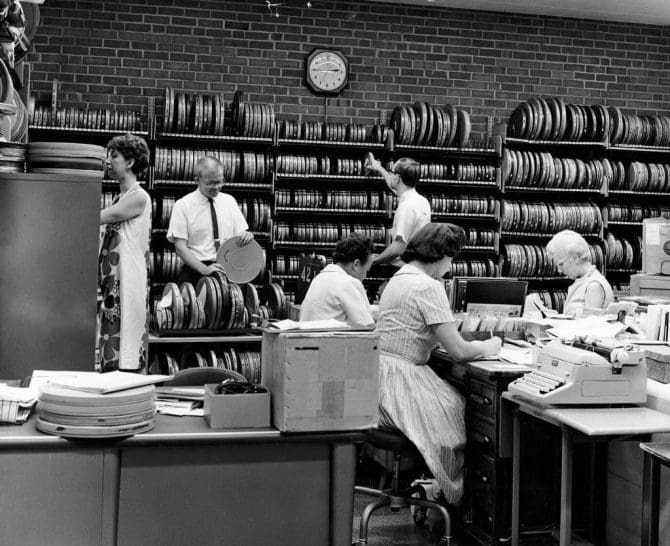 The films were in 16-millimeter format with sound, many of them in Technicolor. They included such subjects as history, table etiquette, nature study, and sports. Brown believed in the educational potential of these films and worked with many institutions in the community to make them available. Heavy users of the service included churches, adult discussion forums, hospitals, scout and nature groups, factories and businesses, and county, parochial and private schools.

When the Films and Recordings department moved into the new library location in 1955, Brown installed in its new space listening stations equipped with earphones and wired a high-fidelity sound system to provide music to the Reading Garden, Huenefeld Tower Room, Children Department and the Library’s auditorium. All of this new equipment was funded by Brown’s friend, and user of the library, Mrs. Rudolph Wurlitzer. 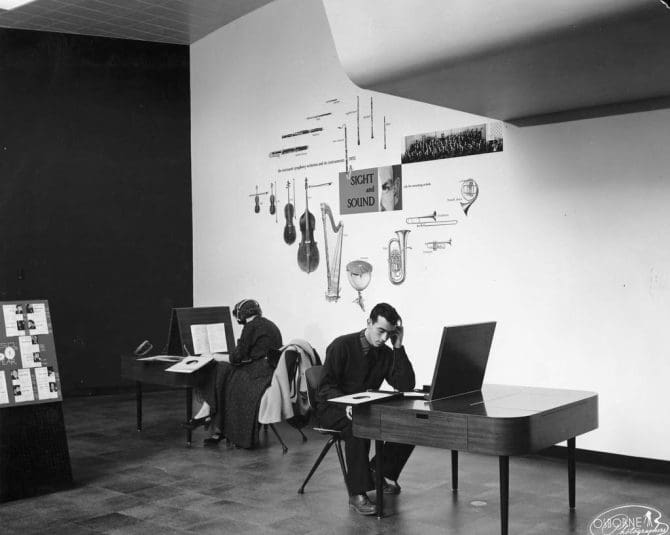 Karline Brown brainstormed another way to promote the record collection: a weekly program that featured what she described as pre-recorded concerts. Every Thursday at noon she would play a recording “of the World’s Great Music” for a listening audience in attendance. Music at Noon started in the Library Annex on October 2, 1947 where listeners sat on folding chairs. It continued at the new library location after 1955 where Brown would pump the music into the Reading Garden. In 1971 the program ended, ceasing the popular weekly gathering of musical aficionados...until now! 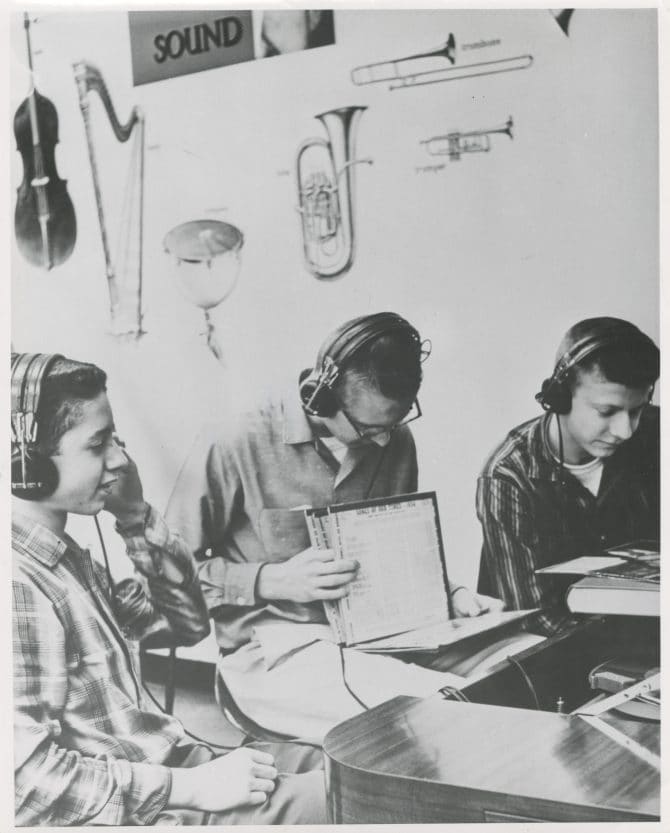 This October – 75 years since the first Music at Noon concert – the Popular Library staff will be sharing music on the Main Library’s renovated North Plaza for a reinvented Music at Noon series each Monday:

To celebrate the 75th anniversary of Music at Noon, enjoy the original program from October 2, 1947 which featured the works of Handel, Griffes, Prokofiev and Strauss – with a few more selections thrown in!

Celebrate one of the first creators of modern jazz, Thelonious Monk, on his 105th birthday. Listen in as we play a radio special produced by local Jazz expert Oscar Treadwell that profiles Monk’s career. October 15 also marks 75th anniversary of Monk’s first recording as a leader for the Blue Note record label.

Tune in as we spin a selection of tunes featuring Cincinnati area artists from our collection of vinyl records.

Warlock Vorobok presents Music at Noon: the Frightening Edition. It's Halloween and the Warlock has the spookiest playlist to share with you on the plaza.

“I Own Some Fine Binoculars”

In addition to a love for music, art and film, Brown was a big nature lover. In particular, of birds. “I am an avid bird watcher,” she said, “I own some fine binoculars and just the right boots for trudging through the marches.” Near the end of her library career, she organized a lecture series in 1963 called Birdwatching: Indoors and Out, that explored topics such as the descriptions and filming of birds, sounds of bird calls, habits and habitats of local birds, and methods for good record keeping.

She concluded the series by recruiting her friend Karl Medlowski of the Natural History Museum (the acclaimed Wildlife photographer and the subject of a 2022 documentary) to lead a field trip with 200 birdwatchers to Spring Grove Cemetery. Karlene commented at the time in the local paper, “As far as I know, this was the first time any library ever sponsored such a series.”

Inspired by Brown’s 1963 series, Lea Shull, Library Customer Adviser at the Downtown Main Library, formed a birdwatching group CHPL Bird Nerds. One of their first events was An Evening of Mindful Birdwatching, opens a new window at Hauck Botanical Gardens on September 24. Keep your binoculars handy as future Bird Nerd events are posted on our website, opens a new window.

Brown continued to give even after her passing in 1985. In her will, she established the Karline Brown Fund which provided funds to library staff wishing to pursue graduate work in Library Science. Since her death, hundreds of staff members have used this fund to further their education.

In 2000, Karline Brown Fund was inducted in the Cincinnati & Hamilton County Public Library’s Hall of Fame for her innovative ideas and service to the Library and its customers.