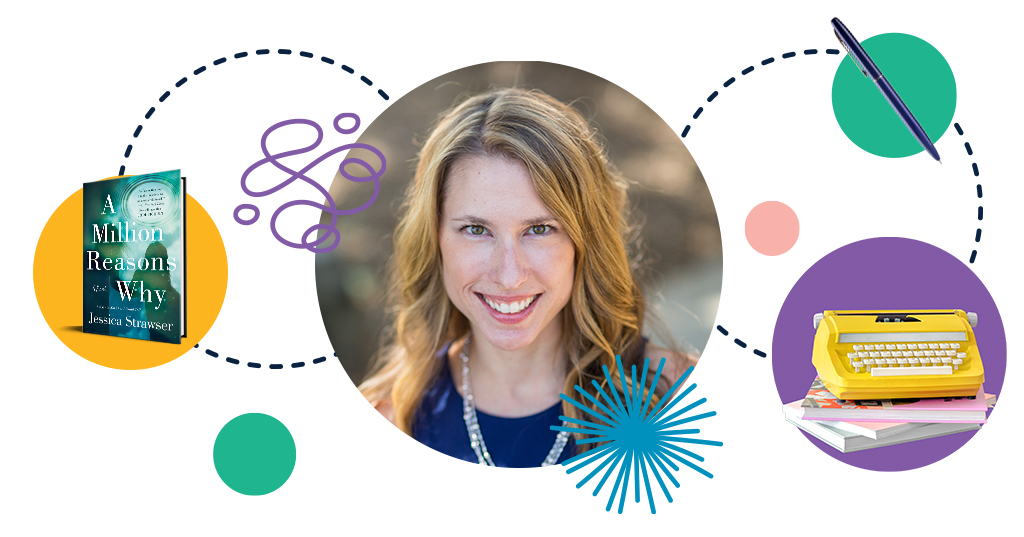 Jessica Strawser is the editor-at-large at Writer’s Digest, where she has served as editorial director for nearly a decade. Known for her in-depth cover interviews with such luminaries as David Sedaris and Alice Walker., Strawser has written for The New York Times Modern Love, and Publishers Weekly. She’s the author of the book club favorites Almost Missed You, Not That I Could Tell, and Forget You Know Me. Her fourth novel, A Million Reasons Why, was just released so we decided to catch up with Jessica and see what she’s been up to since her Writer-in-Residence (WIR) days with the Library.

What did you take away from your time as WIR, both personally and professionally?

I’ve always been active in the literary community, but serving as WIR made 2019 my busiest, most engaged year ever—which, of course, would be followed by the most isolating year ever as 2020 brought challenges we never could have foreseen.

I ended my WIR term feeling grateful for all of the new and strengthened connections with area writers, branch book clubs, readers, librarians and more—and that gratitude has only grown in the time since. Connection is so important, even in creative work that we do largely independently. Several of the writers who I met through my WIR office hours and workshops have kept in touch, and their friendship has really driven home what a lasting and genuine gift this program has been to all of us.

As a writer, how did you cope with COVID, quarantine, and all the challenges of the last year?

In early March 2020, I’d just released the new-in-paperback edition of my third novel, Forget You Know Me, and was looking forward to a full spring calendar of book festivals, writing conferences, and other events that of course never came to be. It was culture shock at first—and like many other people, I’ve also taken this year to shift my priorities toward my family, with young children in school and at-risk parents out-of-state. As someone who worked from home before the rest of my family had to stay there too, my writing routine had to become very flexible to meet the deadline for my next novel.

A year later, my latest, A Million Reasons Why, just released March 23 in hardcover, eBook, and audiobook with my first ever entirely virtual book tour. I’ve just started receiving tentative invitations to meet with local book clubs again (outdoors, with precautions in place, or virtually) and it’s been heartening to see how the reading and writing communities are evolving, rebounding, and continuing to thrive.

Tell us about your new book.

A Million Reasons Why begins when two strangers hundreds of miles apart are linked as half-sisters by a mail-in DNA test kit. For Sela, a young single mom in North Carolina, the connection is an answered prayer: Her time is quite literally running out. But for Caroline, a busy event planner, wife, and mother of three here in Cincinnati, the results blindside her close-knit family and dismantle everything she knows to be true.

What follows is a tangle of moral dilemmas, as both must re-examine what it really means to be family, the depths of a mother’s love, and the limits and the power of forgiveness.

I’ve been fortunate to have this book endorsed by some of my own very favorite writers—including Jodi Picoult, Angie Kim, Joshilyn Jackson, and Patti Callahan Henry—and named to 2021 Most Anticipated lists by Goodreads, SheReads, Bookish, Frolic, and E! News.

Readers can learn more about Jessica and her books at JessicaStrawser.com. Check outJessica’s books in the Library’s catalog at CinLib.org/JessicaStrawser.