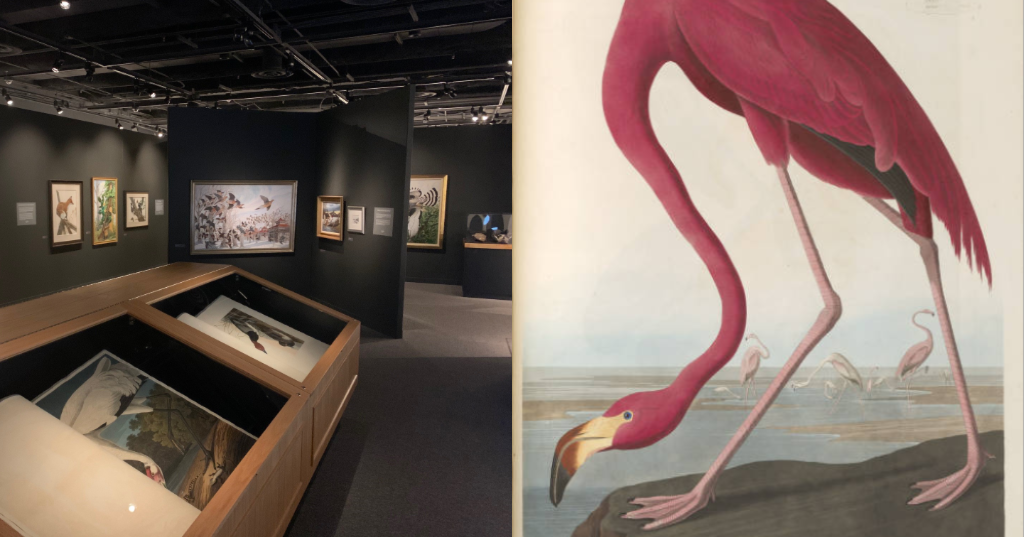 Cincinnati Museum Center, opens a new window (CMC) is looking back at its 200-year history through the brushstrokes of legendary artists John James Audubon and John A. Ruthven. The exhibition, In the Audubon Tradition: Birds of a Feather, opens a new window uses original artwork along with scientific specimens and historic documents to highlight CMC’s legacy of research and discovery of the natural world. While the museum looks back on its story spanning the last two centuries, it is also looking forward through the artwork of more than 80 contemporary artists who have been inspired by the work of Audubon and Ruthven.

The exhibition, as with CMC’s story, starts with John James Audubon, the institution’s first employee. In 1819, Audubon accepted a position as a taxidermist and background painter for the Western Museum Society, a predecessor to CMC’s Cincinnati Museum of Natural History and Science. Audubon would later set out from Cincinnati with the goal of painting all of the birds of North America. The result of those efforts was the Birds of America. Printed between 1827 and 1838, the work consists of 435 hand-colored, life-size prints, bound in four volumes, each measuring 21. X 39.5 inches and weighing 40 pounds.

Only 120 complete sets of the original Birds of America still exist, including the one owned by the Public Library of Cincinnati and Hamilton County, opens a new window. Through a partnership between the Library and CMC, all four volumes are featured in the exhibition. Due to the size of the folios, displaying each of them is more complicated than most books that are commonly used in exhibits. This complexity led the Library to commission custom cases and mounts to hold all four of the massive volumes.

Considering the specialized nature of the case and mounts that are required to safely and securely display the folios, the CMC and Library teams determined that it would be best to move everything from the display at the Library and represent the volumes at the museum in the same manner. Through the work of more than 20 staff members from both institutions, the rare books and casework were able to safely make their way out of the Joseph S. Stern, Jr. Cincinnati Room at the Downtown Main Library and into Union Terminal. 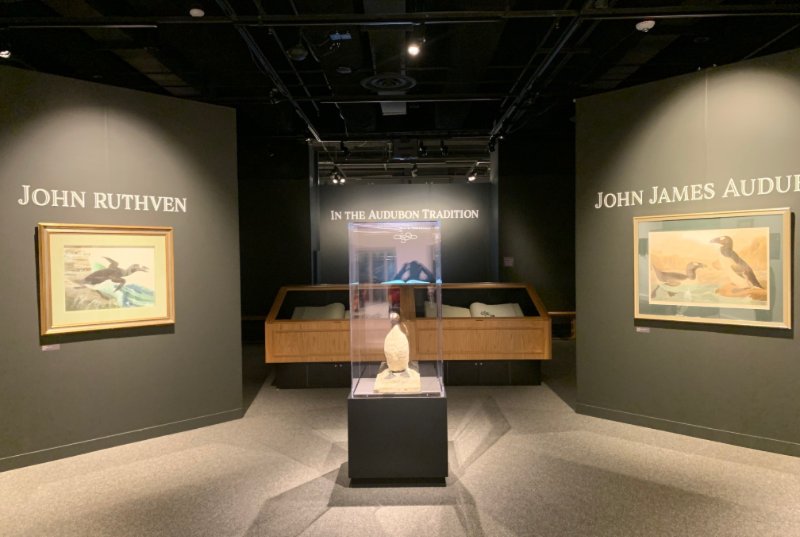 While Audubon is most famous for his realistic depiction of birds, he also painted other animals. To highlight the breadth of Audubon’s work, one volume of the two-volume sets titled The Viviparous Quadrupeds of North America, on loan from the Library, is also included in the exhibit.

To prevent the deterioration of the images and paper of Birds of America and Viviparous Quadrupeds, the pages are turned each month during the exhibition. This also allows repeat visitors to engage with new images and stories. One such story involves the American Flamingo image that will be on display in December.

Curious as to why Audubon painted the flamingo with its neck bent down? Well, since Audubon was painting each bird life-size he had to get creative to fit it on a single page.

Through Audubon’s work at the Western Museum Society and in the creation of Birds of America, he grounded CMC’s collection and research in scientific investigation and discovery. That tradition continued nearly 100 years later when a young John Ruthven made his first donation to the museum – a hummingbird he had found. Ruthven would eventually find his own fame as a wildlife artist, and follow in the footsteps of Audubon through his continued contributions and work developing CMC’s collection.

The shared love of nature and strict dedication to realism is apparent when entering the gallery, as you are greeted by a specimen of the now-extinct Great Auk flanked by paintings of the bird by both Audubon and Ruthven. In a continuing effort by the museum to engage in scientific research, Ruthven joined a museum organized expedition to the Philippines where a new species of bird was discovered, the Panay-striped Babbler. The exhibition includes his original watercolor alongside a specimen of the bird as well as many other original paintings by Ruthven on loan from local collectors and institutions, such as the Cincinnati Zoo & Botanical Garden and Northern Kentucky University.

Audubon’s and Ruthven’s ongoing influence on wildlife artists is showcased in a contemporary art section of the exhibition, supported by the Susan Kathleen Black Foundation, Inc. More than 250 original paintings and sculptures by 81 of North America’s top wildlife artists are included in the exhibition and are available for purchase with the proceeds going to support the care and preservation of CMC’s collections. This brings the story back to where it began, with the love of nature and art combining to preserve and share its stories with future generations at CMC.

In the Audubon Tradition: Birds of a Feather is on display until January 5, 2020 and is free for CMC members and included with general admission. For more information visit cincymuseum.org/Audubon., opens a new window