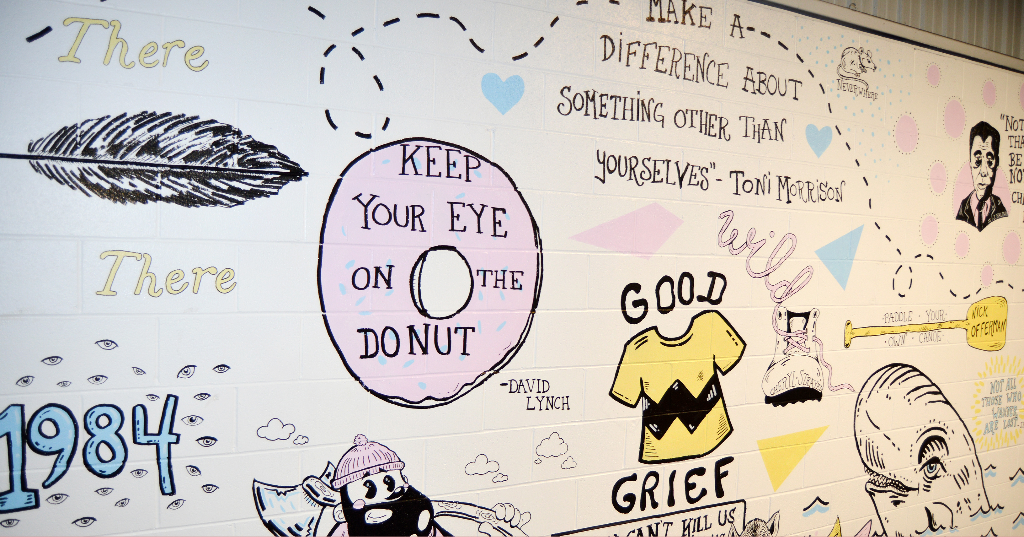 When you move into a new space, one of the first things you want to do is decorate it and make it your own. So when the Library opened its new, state-of-the-art Distribution Center in September of 2019, the staff working there were eager to express themselves.

So what do a bunch of Library workers in a new building have in common? A love for literature of course! We commissioned artist and maker Joshua Stout, opens a new window, who also painted a mural outside the Walnut Street entrance at the Downtown Main Library, to create a larger-than-life representation of staff’s favorite literary moments.

“At the Distribution Center open house, staff wrote down their favorite book, literary figure, or a literary quote on a piece of paper,” said Chad Lewis, Sorting & Materials Retrieval Manager. “These were then given to Stout and turned into a mural.”

Joshua Stout is the founder of Makeshift Mammoth., opens a new window He's created a multitude of murals, social media content, custom portraits, and apparel, in addition to working with various galleries and creating interactive art installations. In 2017 he curated and managed the light-based interactive sculptures as well as the kickoff parade for BLINK Cincinnati. 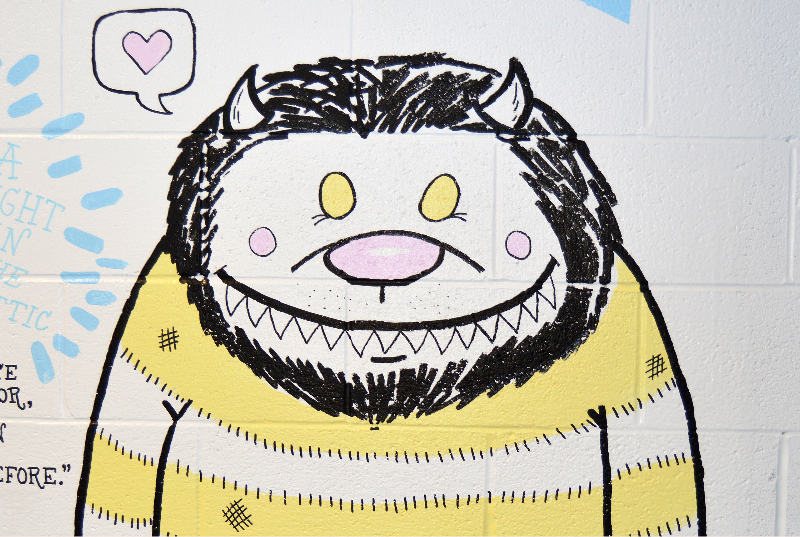 His mural at the Distribution Center takes up the wall behind the sorting facility and faces the Cataloging and Processing Departments. Once Stout received all the staff members’ literary favorites, it was his job to design how that would all be represented in one big work of art.

“My favorite book is The King in Yellow, opens a new window by Robert W. Chambers,” said Lewis. “I chose to submit it as my idea for the mural because I’m a big horror fan and it’s a classic of the genre. I thought it would be interesting to see what the artist would come up with.”

In just under a week, Stout brought all of the mural suggestions to life, from quotes by James Baldwin to friendly monsters from Where the Wild Things Are, opens a new window. There’s even a golden snitch from the Harry Potter series flying throughout the mural, its path marked by dotted lines that help tie the whole thing together.

While this space isn’t open to the public, we’re proud to give you a behind-the-scenes peek at this wonderful work of art in a facility that was made possible by community members of Cincinnati and Hamilton County.

Learn more about the Distribution Center as part of our Building the Next Generation Library initiative.