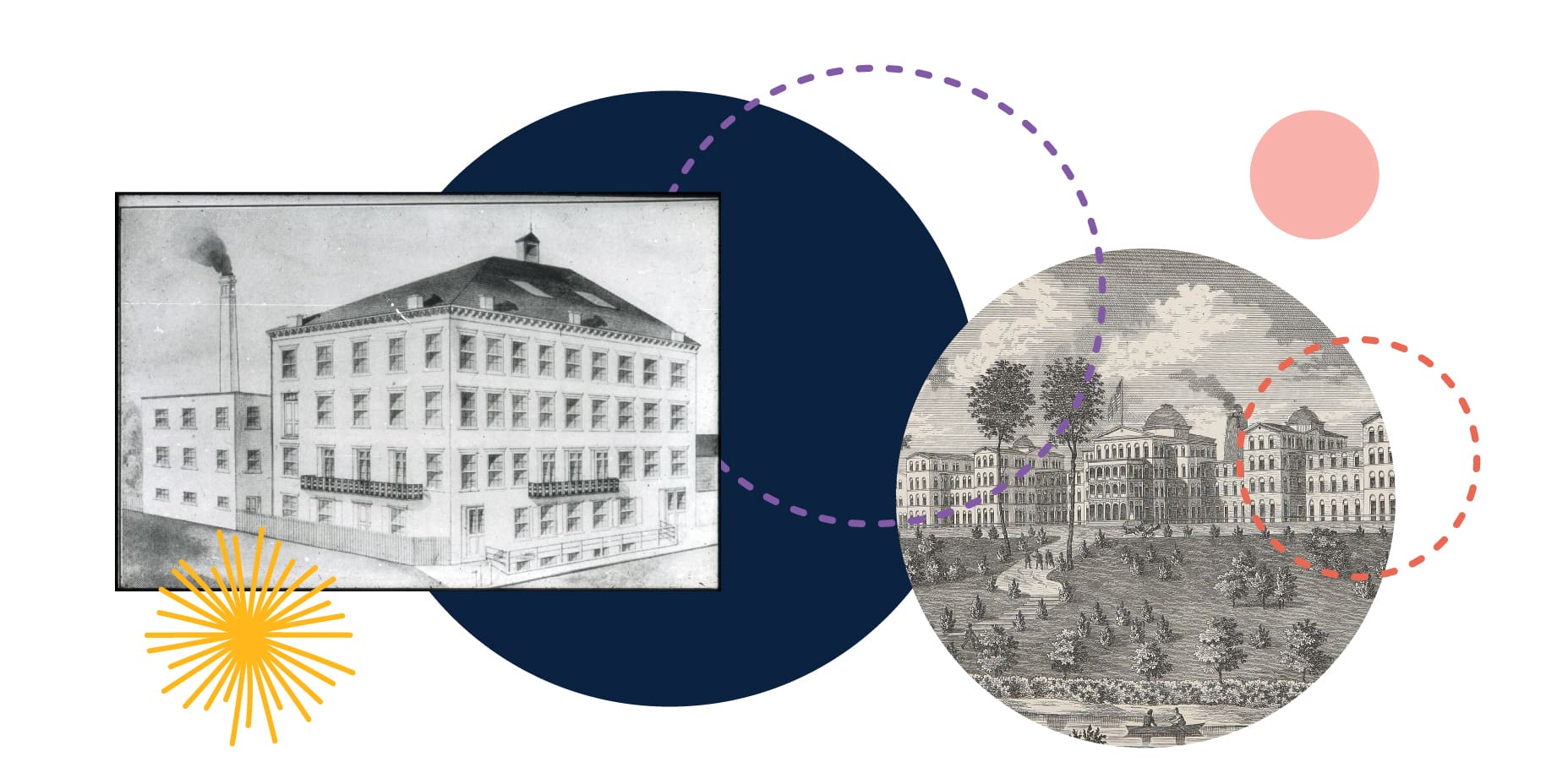 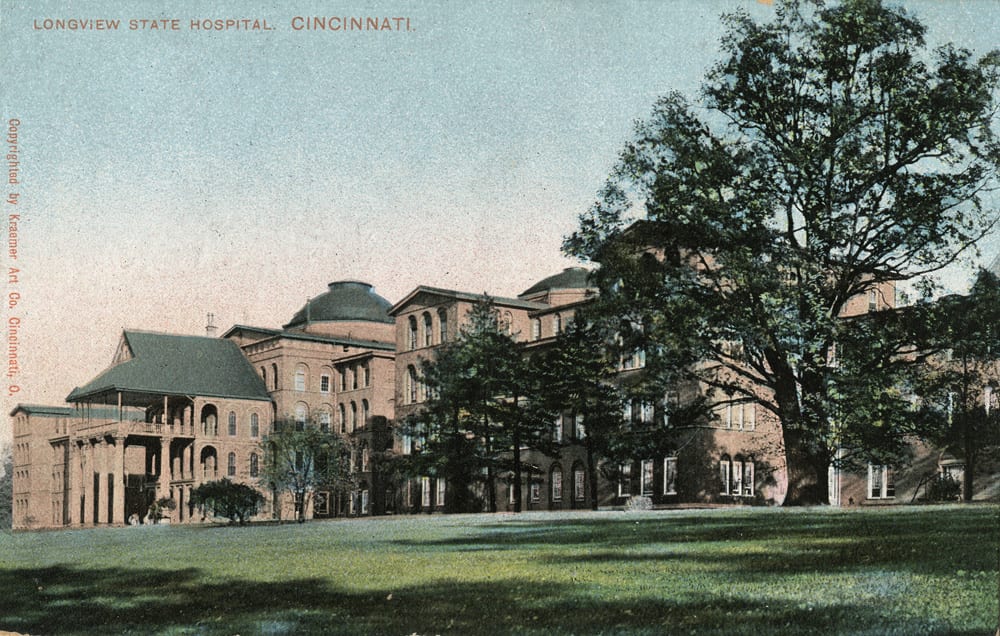 The Longview Insane Asylum opened on Paddock Road in Carthage in 1860. This followed the passage of an act creating a separate district in Hamilton County for the purpose of treating those living with a mental illness. The treatment of such patients had advanced due to social reform championed by reformers like Dorothea Dix and others. Dix traveled to nearly 500 towns in Massachusetts starting in 1841 compiling research on the care of indigent persons in prisons, poorhouses, and other housing, documenting the harsh, inhumane conditions. She reported the horrors she had witnessed and fought for funds to build institutions for humane, caring treatment for those living with mental illness. She interviewed doctors in private clinics in the United States and traveled to Europe while fighting to promote better care for patients, caring for their physical well-being as well as addressing their mental state. The model for Longview was more in keeping with that philosophy than its predecessors. 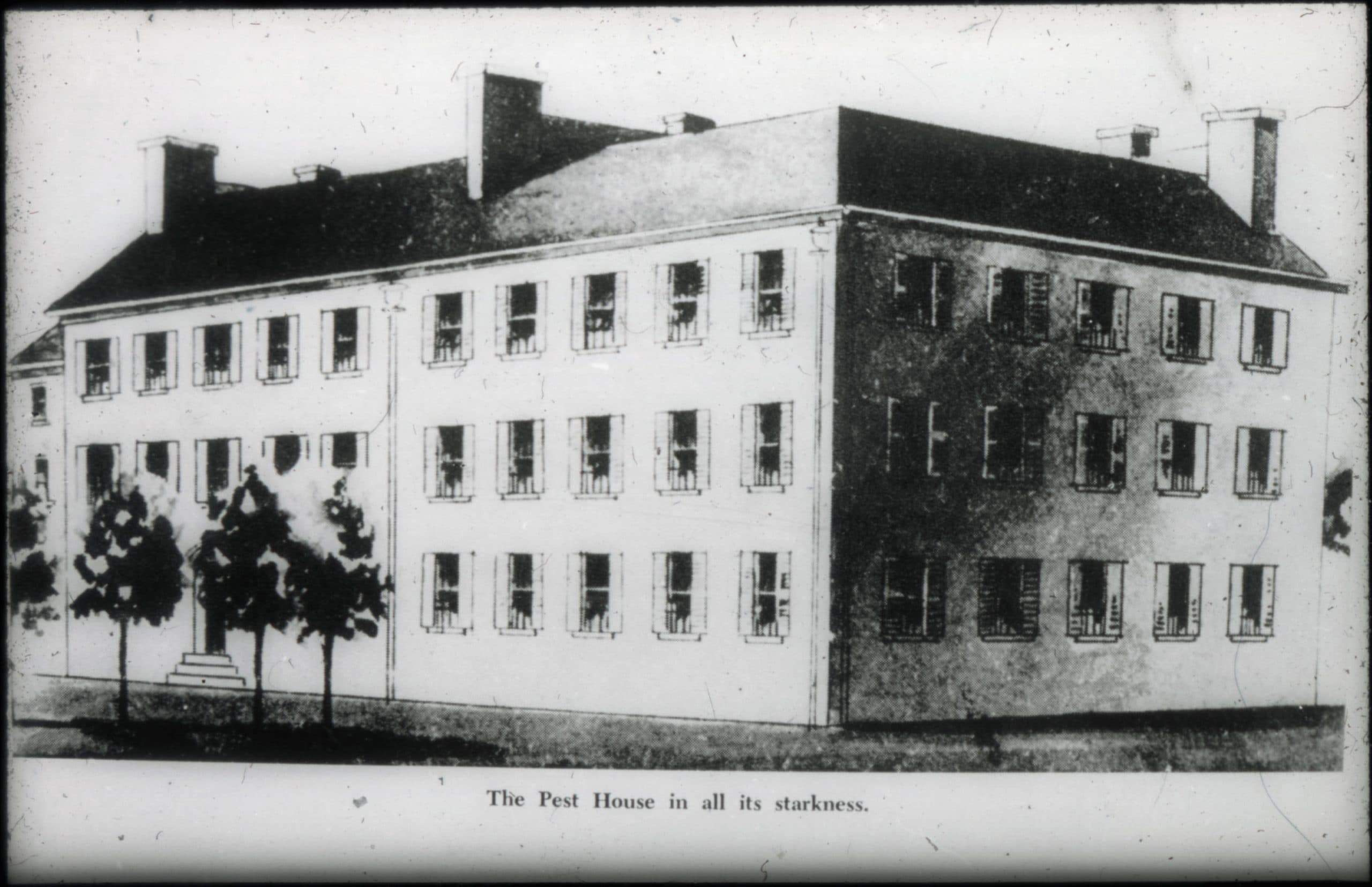 Prior to the establishment of the Commercial Hospital and Lunatic Asylum, care for those living with a mental illness was provided in family homes, or individuals were housed in jails and other inadequate facilities unless their family had the funds to pay for private care. In 1820, Jacques Villere, the governor of Louisiana, had a proposal for states bordering the Ohio and Mississippi Rivers. He sent a request from Lousiana’s state legislature urging these states to build hospitals to provide treatment to boatmen who fell ill on their journey along the river. Dr. Daniel Drake of Cincinnati took this request to Columbus before the state assembly asking for a hospital and asylum in Cincinnati. The bill passed Jan. 22, 1821, resulting in the establishment of the Commercial Hospital and Lunatic Asylum which opened originally as a combined hospital, insane asylum, infirmary, poorhouse, and orphanage in 1823 on what is now the corner of 12th and Elm streets. It was a three-story brick building, with the capacity to house 250 patients. The asylum annex was not completed until 1827. However, by 1831, with overcrowding and mismanagement, the insane asylum was under scrutiny as being little more than a squalid prison to house these patients. 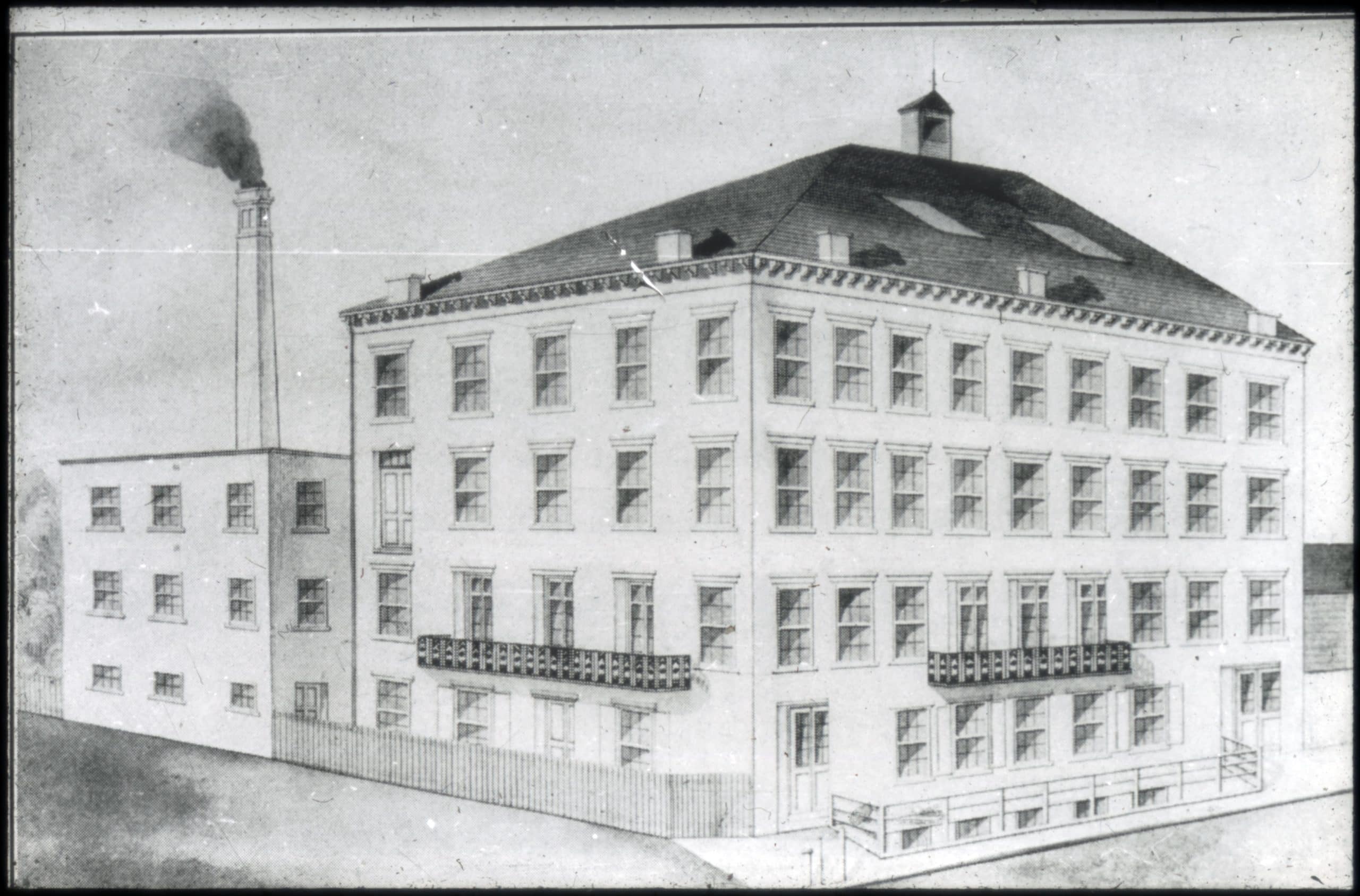 By 1853 there were 147 patients and, responding to pressure from the public, the county commissioners appointed a committee to study the conditions of the annex. The building was all but falling down when a move was made to the Ames Mansion at Lick Run, previously intended to be a hotel. 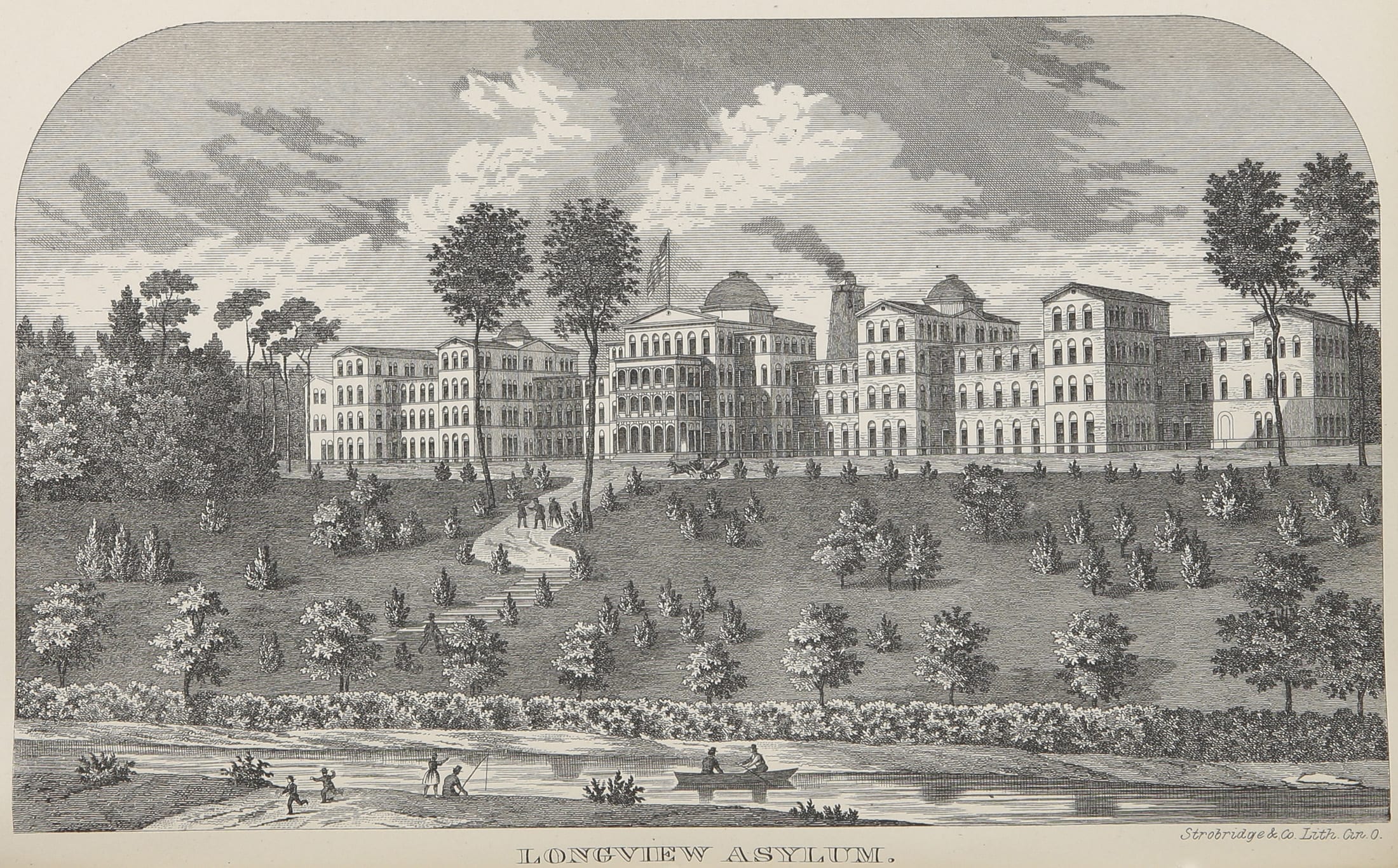 “The Annual Report of the Board of Directors and Officers of Longview Asylum…” published in 1862 reported on the first full year of operation of the institution. The report of the Superintendent, Dr. O. M. Langdon, compares the treatment and results at Longview as superior when compared to the results of older institutions to the recovery of patients cared for in the home. He expounds on his belief that the earlier patients are admitted for treatment, they are given “greater hopes of restoration to health.” Those whose families “delay in making use of the best means of cure, are finally brought to an asylum so far gone as to be beyond any reasonable hope of their ever being discharged from it except by death.” The report lists details of admissions, causes of disease, including those attributed to domestic troubles or intemperance, finance reports, staffing, and repairs to the facility.

In the 1861 report for Longview, it was recorded that the hospital was offering entertainment and amusements, including a bowling alley, dancing parties, singing birds, and others activities for the patients to enjoy. Dr. Langdon also reports that the treatment of patients in former institutions “where the unfortunate inmates were scourged and tormented as though their misfortune was their crime, is fortunately not quite so prevalent” (at Longview). Reports of repairs to the facility were also detailed as efforts were made to assure the safety and comfort of the institution.

Future annual reports provided the superintendent’s report and statistical charts giving information on the finances and bookkeeping of the institution. Information is included on the patient population, diagnoses, and how they may be entertained or engaged in work or occupational therapy activities. Many of these reports have been digitized and are included in CHPL’s Rare Book collection.

On Dec. 23, 1869, The Cincinnati Enquirer published an article, “Report of the Grand Jury: How our Public Institutions are Conducted,” in which the reviewed conditions found when they inspected institutions such as the county jail, the county infirmary, Cincinnati Hospital, and others, including Longview Asylum. They concluded that “it was evident that the institution is in the best possible condition, and superintended with great care and economy by Dr. Langdon.” The treatment there, “kindness, sympathy and consideration, which in many instances works wonders in the way of restoration to healthy mental development.”

“Taking Down”, Physical Punishment of Patients

Although the philosophy of humane treatment was the noble goal, annual reports did reveal a lack of funds and understaffing. Having staff that were not sufficiently trained may have been partially to blame for the mistreatment of patients by staff, however lack of oversight left patients at the mercy of their caregivers.

The Cincinnati Enquirer published several articles in 1879 describing punishments, “taking down”, and beatings occurring in the laundry of the hospital. Those female patients who drew the wrath of a particular employee would be either repeatedly submerged in a tub of water or could have a wet towel wrapped around her face, preventing her from breathing. Beatings were often administered as witnessed and reported in these articles by a former employee who resigned from the hospital and came forward with the information.

Looking to the Future 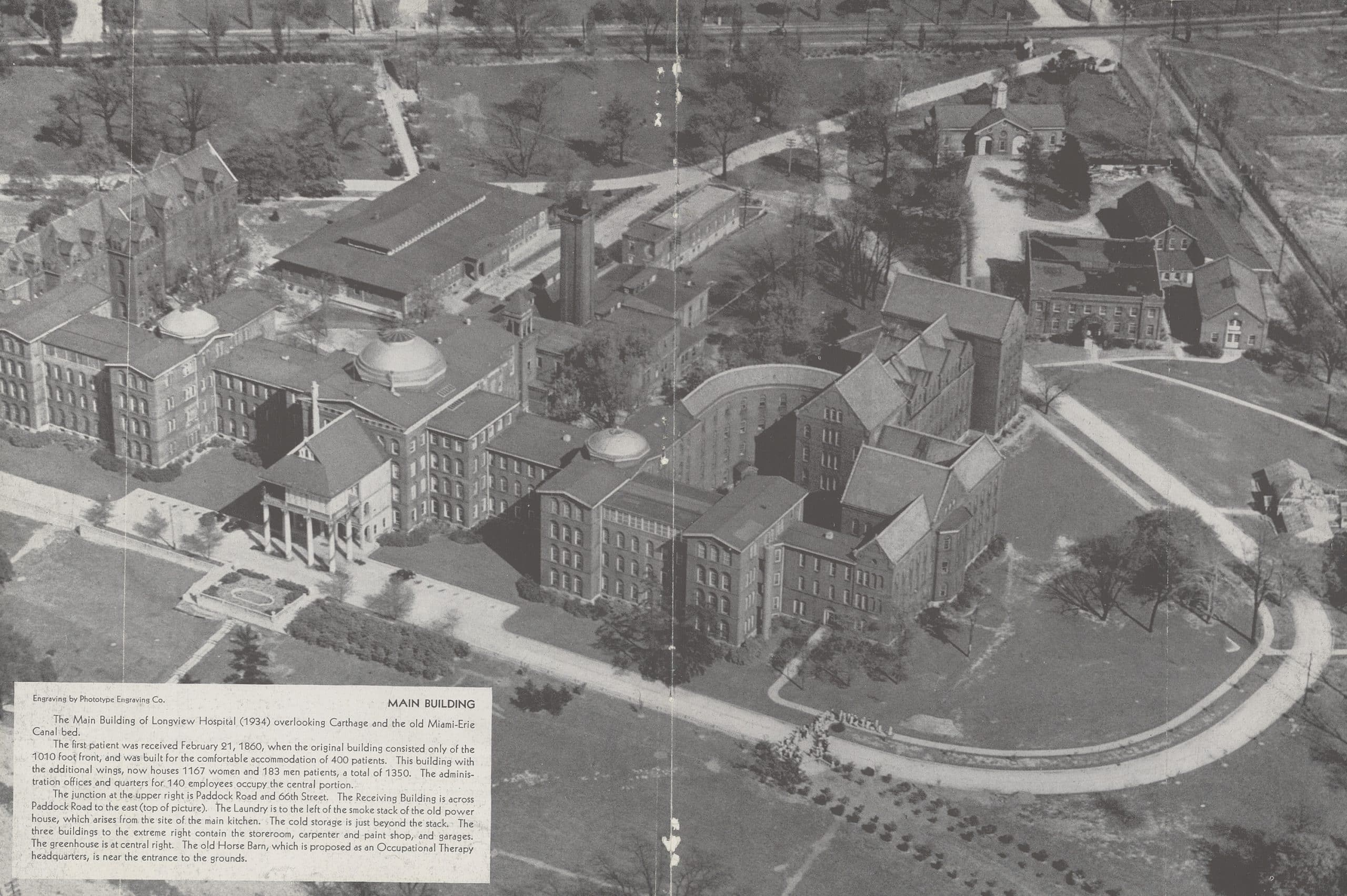 Challenges to adequately staff an overcrowded facility would continue as treatments offered few advances until pleas for research funds were allotted to study how best to help those living with mental illness. Research in the 20th century would eventually allow these patients to be treated using medication and psychiatric therapy and to leave the institutional surroundings. Patients who had developed marketable skills in occupational therapy at Longview were often able to use those skills to support themselves as they became independent when able to live in the outside world.

“Longview, an Ohio state hospital in Cincinnati for the mentally ill,” published in 1937, reported that the hospital was operating well although their budget was not sufficient to provide treatment options for these patients in keeping with modern standards. Furthermore, the report recommended more effective treatment to result in lower admissions, shorter stays for those who were treated as in-patients and establishing out-patient clinics for the treatment of those who could avail themselves of this type of treatment, thus reducing the overcrowding in the hospital and producing a more successful outcome for these patients.

As the institution’s population dwindled in the mid-1900s due to the success of modern treatment methods, such as therapy and medication, the remaining patients were housed in the newer buildings. In 1984, the hospital was renamed the Pauline Warfield Lewis Center. The Rollman Psychiatric Institute closed in 1990 and merged with the Lewis Center. In 2000, the Lewis Center name was changed to Summit Behavioral Center.

Follow in the footsteps of our Genealogy & Local History Department in their journey to tell the story of Longview. Make new discoveries with resources used to inform this month’s Throwback Thursday post: