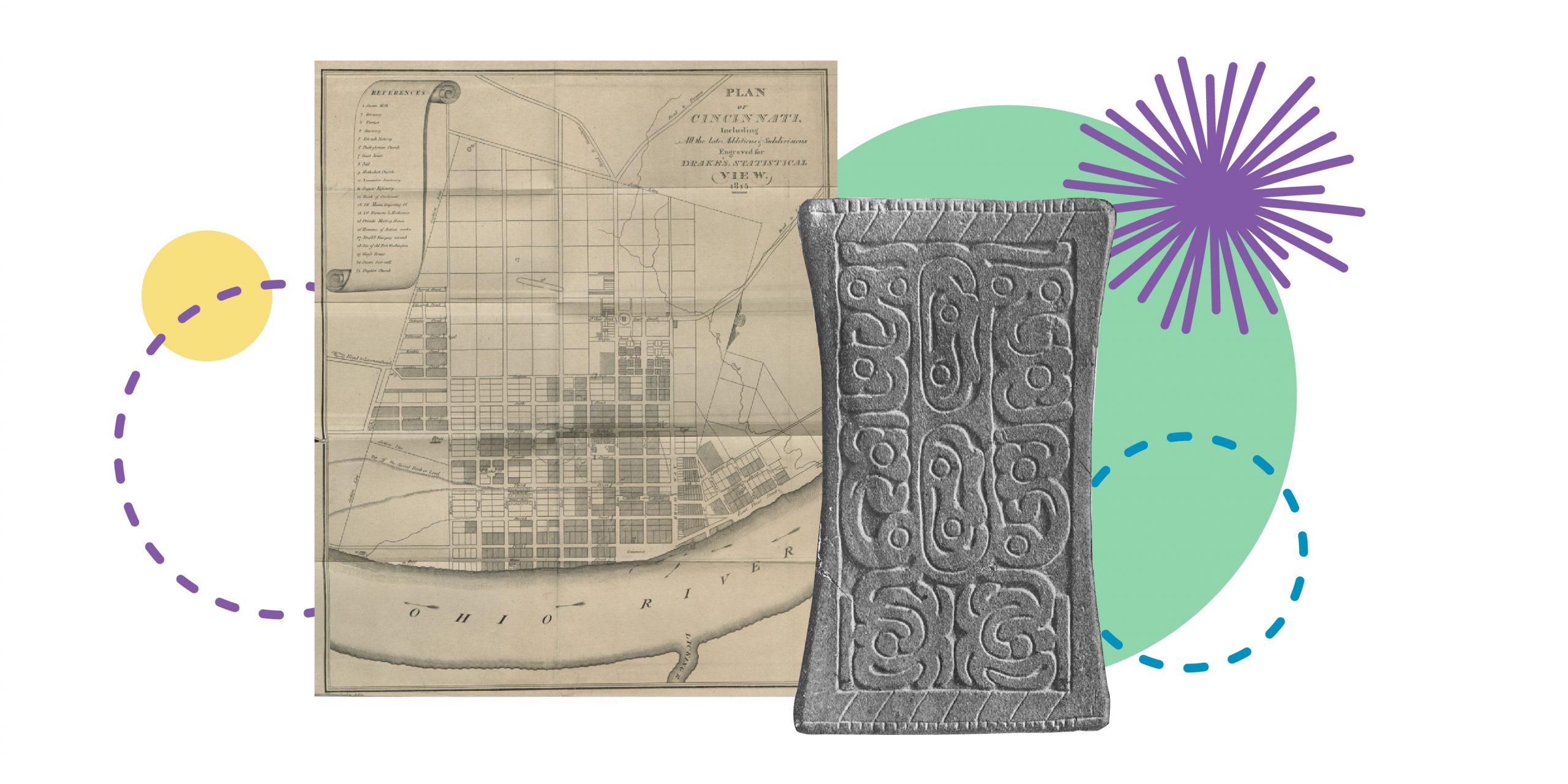 The Cincinnati area is dotted with ancient Native American sites. The Norwood Mound and the earthworks at Shawnee Lookout Park are perhaps the best-known. The earliest colonizers who founded Losantiville and built Fort Washington did so by desecrating Indigenous land that was covered with 2,000-year-old earthworks and burial mounds.

The sacred mounds were all destroyed to make way for the building of the city. Had it not been for one of Cincinnati’s most prominent citizens, all documentation and descriptions of the mounds perhaps would have forever faded. 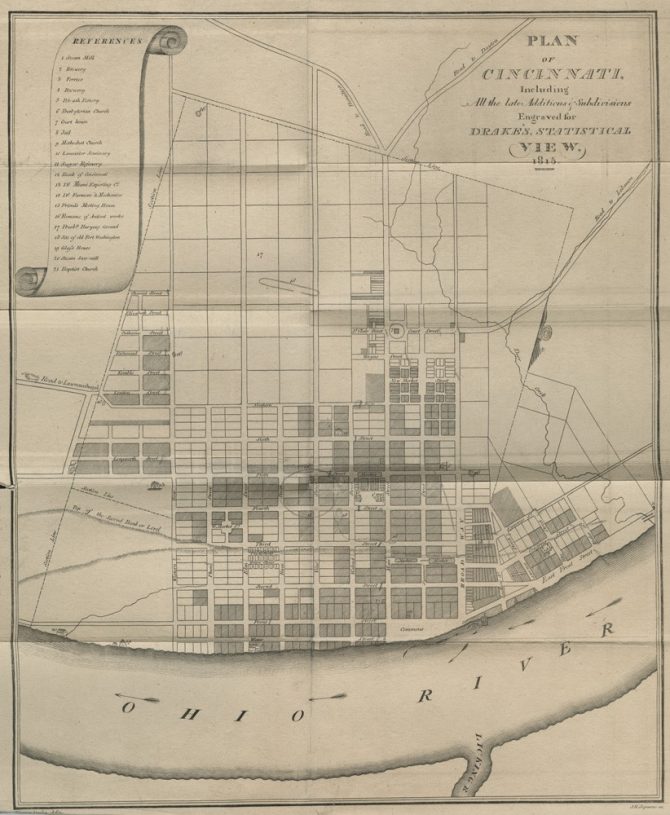 This large map was included with Daniel Drake’s 1815 book Natural and Statistical View. It shows, in addition to a great many other vanished landmarks, the “Remains of Ancient Works” which by that point had mostly been leveled. Drake, who went on to found the Medical College of Ohio in 1819, had been in the city since 1801 and drew in the locations from memory.

The site of “old Fort Washington” can be seen in the lower right portion of the map. It was from the fort that General Anthony Wayne set out to survey the mounds in 1793. A young officer named William Henry Harrison accompanied the general on this excursion, and later reported that the upper plain of the basin was “literally covered with low lines of embankments… Many so faint, indeed as scarcely to be followed, and often for a considerable distance entirely obliterated, but by careful examination, and following the direction, they could again be found.” 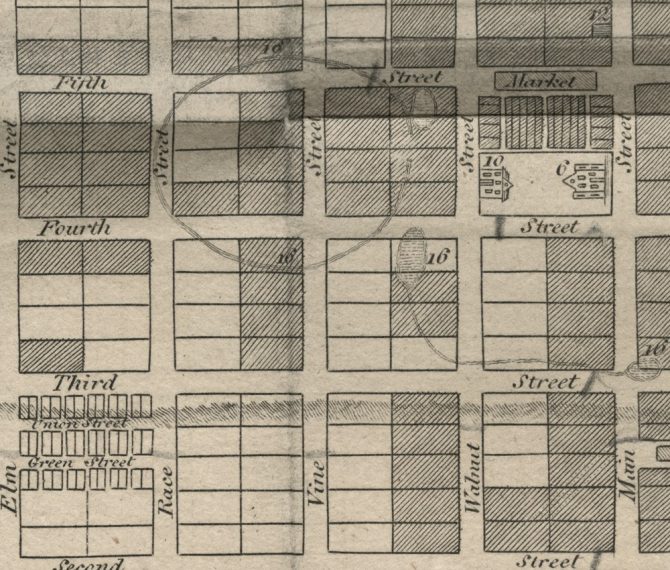 The largest of the earthworks was an 800-foot-long elliptical embankment, which extended from current day Race Street in the west, all the way to Walnut Street, and ran for 660 feet from north to south between Fifth and Fourth streets. For context, the Carew Tower and most of the Westin Hotel sit inside of this site today. Drake goes on to describe this embankment:

“On the east side it had an opening nearly 90 feet in width. It is composed of loam, and exhibits, upon being excavated, quite a homogenous appearance. Its height is scarcely three feet, upon a base of more than thirty. There is no ditch on either side. Within the wall, the surface of the ground is somewhat uneven or waving; but nothing is found that indicates manual labor."

Running to the southeast from this large system were two mounds connected by a long bank. Drake continues:

"The mound at Third and Main Streets was about eight feet high, one hundred and twenty long, and sixty broad. In it were found plummets of jasper, rock crystal, granite and other stones; pulley-like objects of cannel coal and argillaceous earth; incised bones; mica; galena; copper plates; large marine shells cut in such manner as to serve for domestic utensils; spool-shaped copper objects; and the remains of not more than 20 or 30 skeletons." 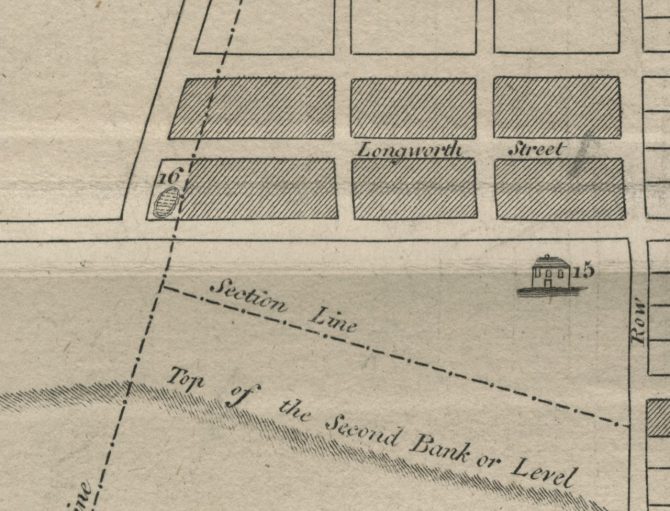 While most of the area was cleared, leveled, and laid out for development by the time Drake published his recollections in 1815, the largest of the mounds remained until 1841, and it was from this site that the most significant archaeological find would be discovered. Originally 35 feet in height, Wayne had the mound cut down to 27 feet in 1794, using it as a base for a sentry tower.

When it was finally pulled down in 1841, the construction crew unearthed what has come to be known as the “Cincinnati Tablet.” The fine-grained sandstone bas-relief tablet is 5 inches in length, and is the first of the Adena Tablets to be discovered. Dismissed as a hoax in later years, local publisher and archaeologist Robert Clarke spent a great deal of time researching the tablet, and confirmed its authenticity in his 1876 publication. 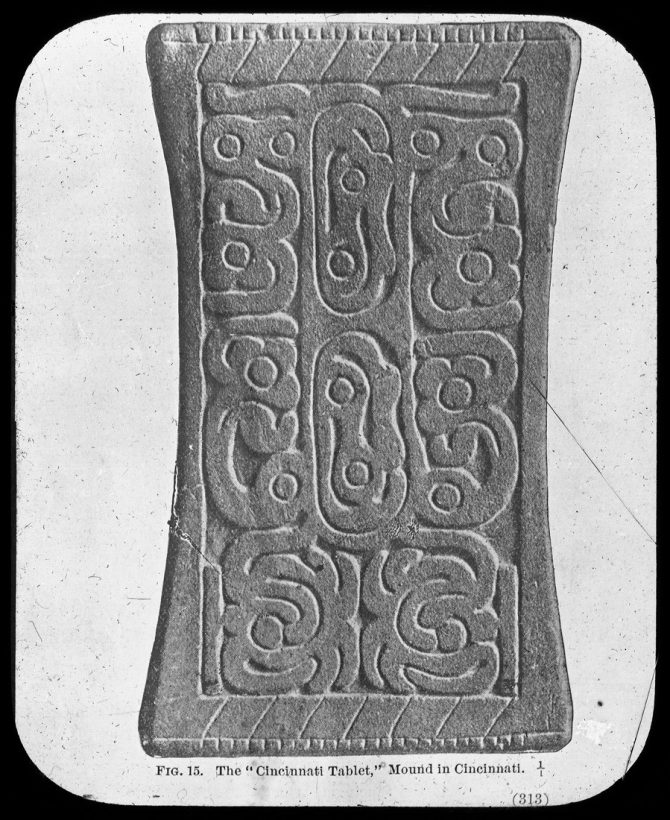 Dating from the Adena culture of the Early Woodland Period (1000-200 B.C.E.), 13 Adena Tablets have been found in Ohio, Kentucky, and West Virginia. There are different theories concerning the function of the Adena or Cincinnati tablet, but its purpose remains unknown. Out of respect for the Nations of this area, including the modern day Shawnee and Myaamia, the Cincinnati Museum Center is no longer displaying the Adena tablet or any other sacred cultural items.

The intersection of Fifth and Mound streets no longer exists. A UPS warehouse currently sits on the land.

View these files on our Digital Library: