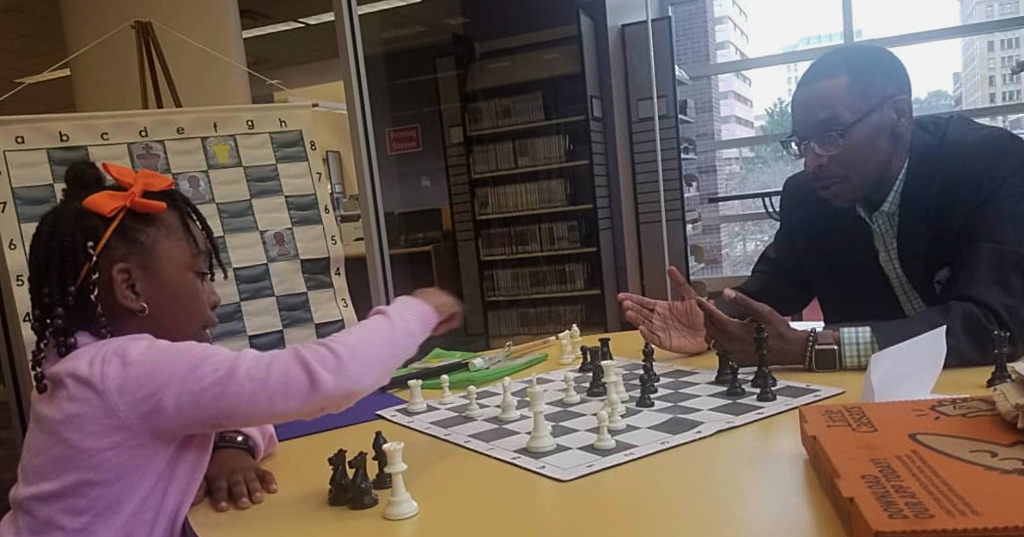 Norman Holloway faces his knights inward toward the king and queen as he preps the chessboard. We asked if there was a particular reason for this setup. The answer: because he likes the way it looks. These preferences echo his belief in the art and essence of chess. It's more than a game. It's something that inspires the principles Holloway uses in all aspects of his interactions with the world. These tools and modes of thinking are what Holloway now shares with his students and the community in his instructional and mentorship program, SuccessViaChess.

Full disclosure: Norm’s a former employee of the Public Library of Cincinnati and Hamilton County. It wouldn’t be a stretch to call him a celebrity here. He’s also a known facilitator of connections and communication in greater Cincinnati. In other words, lots of people know Norm. Those that do can attest that he’s simply an inspiring person to be around, and his carefully chosen words always spark discussions that encourage the placing yourself in another person's shoes. With this in mind, we sat down with Norm for an enlightening conversation about SuccessViaChess, its beginnings, early successes, and future.

When asked about his initial inspiration was to start the initiative, his love of chess factored in heavily. However, he is quick to point out that the more important factor was his love of young people. He shared the following quote from Frederick Douglass, "It is easier to build strong children than to repair broken men."

When thinking about the struggles young people face and to handle life's difficult moments, Norm repeatedly refers back to variations on the phrase “look before you leap.” In chess, he says that translates to “think first, move later.”

In his first open playing session, which took place Saturday, August 10, Norm observed a move a young man was about to make which would result in taking of one of his opponent’s pieces. Norm interjected to quiz the young player on that move’s consequence. Would the seemingly attractive option of knocking a piece off the board leave him open to retaliation? The player thought for a moment, then moved his piece away from his opponent’s and choose a more defensive option. “It's about understanding that every decision we make results in consequences and repercussions," says Norm. 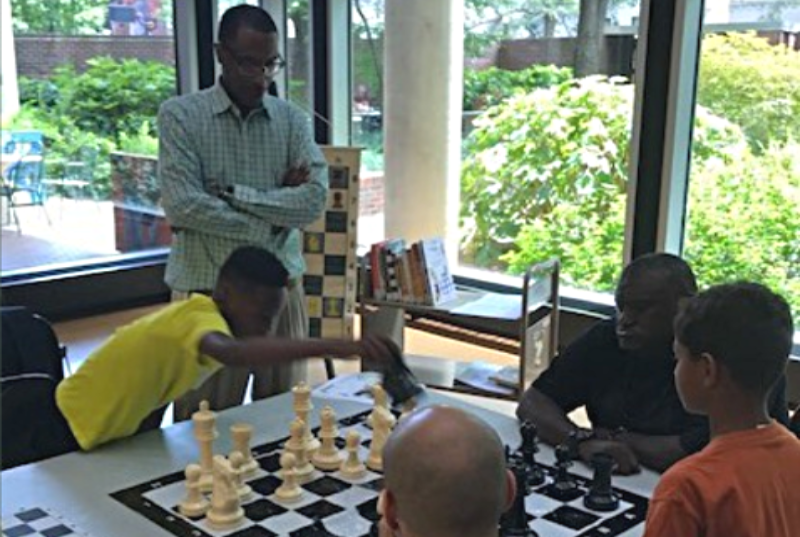 Never one to brag or draw attention to himself, it took some doing to convince Norm to talk about some of the successes he’s seen from his efforts. “In terms of tangible metrics of success, I would simply and succinctly say that a person's presence is in itself a present, especially for children who often lack fathers or positive role models," said Norm. "I think of a young girl student, Mati, who upon meeting me privately remarked to her mom, ‘I have a good feeling about Mr. Norm. He reminds me of Daddy a little.’ I learned that Mati had lost her father a little over two years prior. Like Mati, I too lost a parent in the form of my mother within the same time frame. This unfortunate but inevitable shared experience immediately fostered a connection. Her precocious poise and resilience deeply touched and inspired me. One of our chess instructions fell on Father’s Day of this year and the significance of that day was not lost on me. While I could never fill the space of her father, it was a special moment to be present on that day to provide a glimmer of comfort. These are the moments that remind me that this endeavor is so much bigger than chess!”

SuccessViaChess is still in its early stages but given Norm’s “think first, move later” philosophy, we had a hunch he had some long-term goals in mind. On the broadest of levels, he feels that no matter where things go, as long as he’s continuing to have a positive impact on young people via chess, he’s on the right track.

When pressed on some areas of intended expansion for his mission, Norm mentioned he sees SuccessViaChess becoming “…a platform to foster fatherhood initiatives, curtail violence amongst young people, promote financial literacy, and to serve as a general bridge builder for people of all backgrounds. Ultimately, I would love to have a brick and mortar location that serves as a safe haven for at-risk youth. A place where they can gain guidance and counseling and, of course, play chess!”

We asked Norm what he hopes people who read this blog post get from it. “In making decisions, there has to be an understanding of the risks and returns," he said. "Therefore, when we’re making chess moves, we want those moves to have a purpose, the ultimate goal being checkmate. Chess is a battle of ideas and there are patterns to successfully implement those ideas if followed correctly. Life is no different. I remind my students to be ready so you don't have to get ready! This is how we ensure checkmate in life.”

Norm is hosting an open playing session this Saturday, August 24 from 1-4 p.m. in the Popular Library Reading Garden Lounge at the Downtown Main Library as part of the gaming theme in the Atrium this month. If you can't join him this weekend, Norm can be found year-round tutoring and mentoring students utilizing various meeting spaces within the Library system, mostly in the Downtown Main Library’s TeenSpot or other community rooms.

We encourage any and all to come and participate in this great opportunity to connect and grow with each other at the Library!