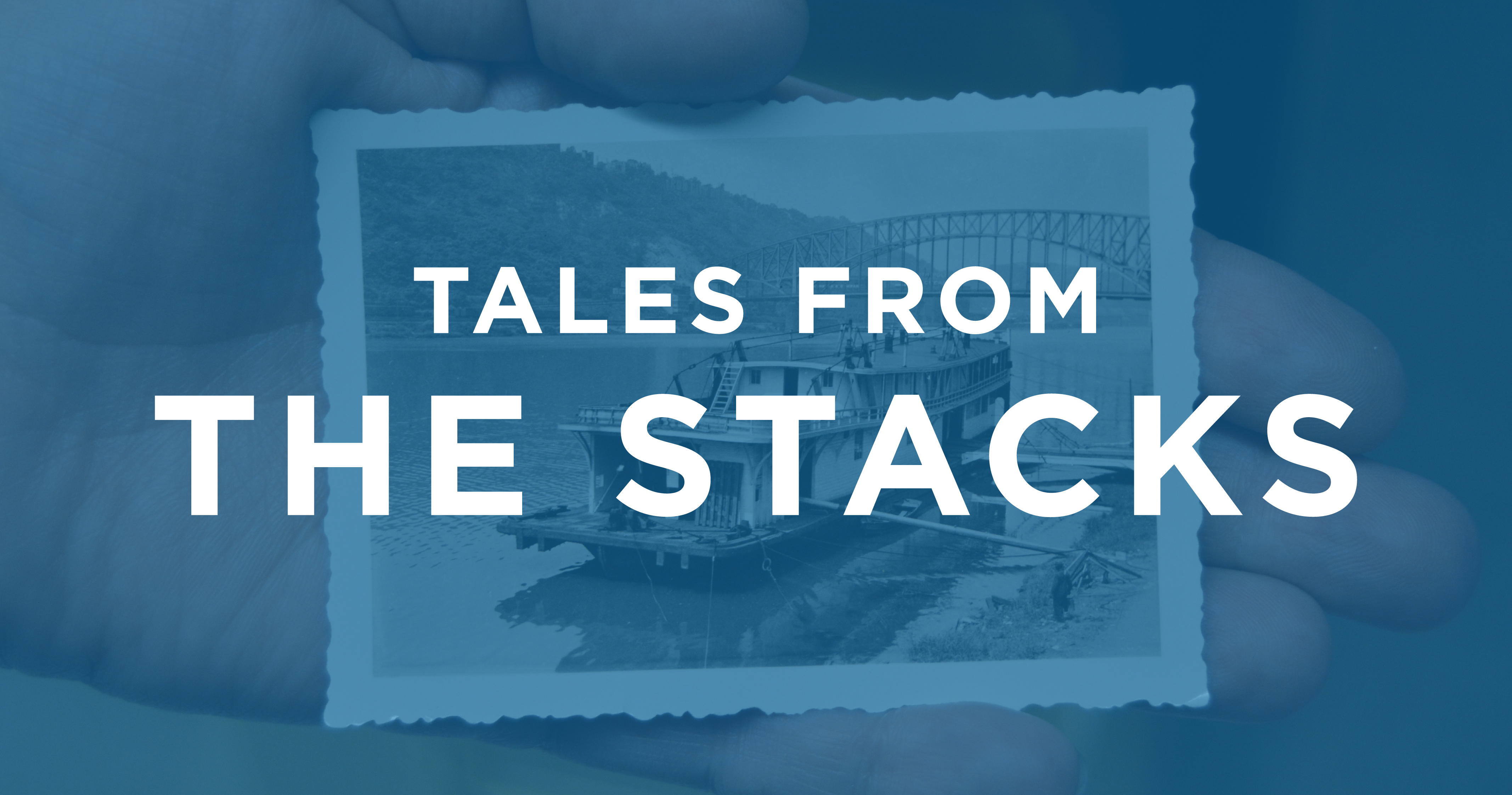 My desk is a mess. On it, you can find books needing labels and stickers, bent books, torn books, burnt books, books with caved-in spines or mangled covers, and books you don’t know what happened to them and you probably don’t want to know. On lingering afternoons, all these books blur together into one collage of pulp, glue, and various fonts.

Then a book cover caught my eye, demanding attention. Against an ombré of blues, mauves, and lavenders, a giant three-dimensional capital "V" stood slightly off-center followed by a period. The bottom third of the cover is an orange field with white directional lines leading the eye off into the infinite horizon.

In my hands was a copy of Thomas Pynchon’s first novel V, opens a new window. A first edition, third pressing published back in 1963 by the J.B. Lippincott Company. Somehow this fifty-six-year-old book survived being circulated over one hundred times and was in good condition save for a few stains and pencil markings.

Library books don’t tend to last this long and it got me curious what other treasures I could discover down in our stacks. Here's some of what I uncovered: 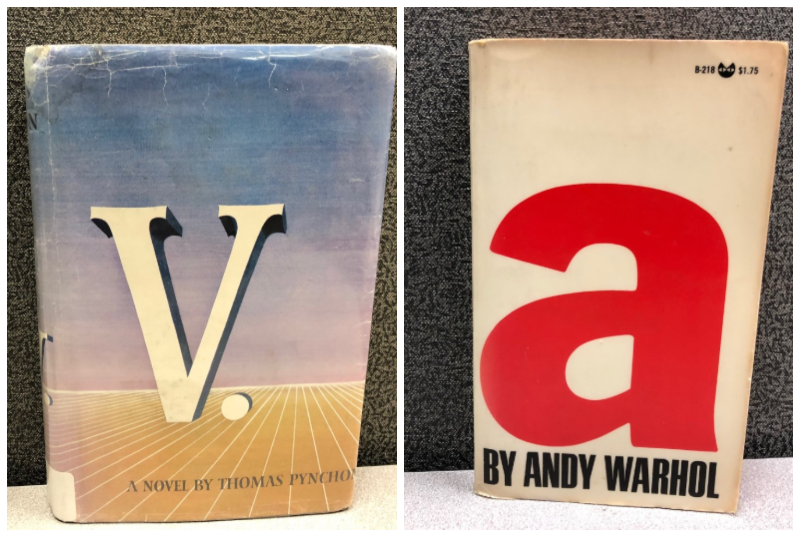 A, a novel, opens a new window by Andy Warhol
Did you know Andy Warhol wrote a novel? Well, he didn’t exactly write it. He had four typists transcribe nearly every word of a two-day conversation between himself and Ondine, one of his actors. Maureen Tucker, the drummer for the Velvet Underground, was one of the typists and refused to print any of the swear words. 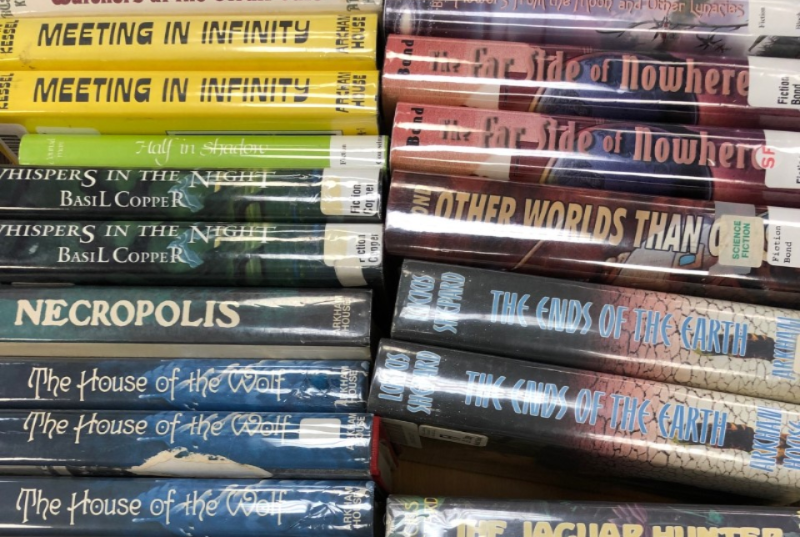 Various books published by Arkham House
On my summer vacation this year, I became excited when we had to stop in Sauk City, Wisconsin to buy food for a camping trip. This town was home to Arkham House publishers, a small press founded in 1939 to preserve the supernatural fiction published in the pulp magazines of the early ’20s and ’30s. I collect these exceedingly rare books because they feature the phantasmagorical artwork of some of my all-time favorite illustrators including Virgil Findlay, Frank Utpatel, and Lee Brown Coye. The Library has a few of these books such as The Dark Man, opens a new window and Others by Robert E. Howard of which only 2,000 copies were ever made. 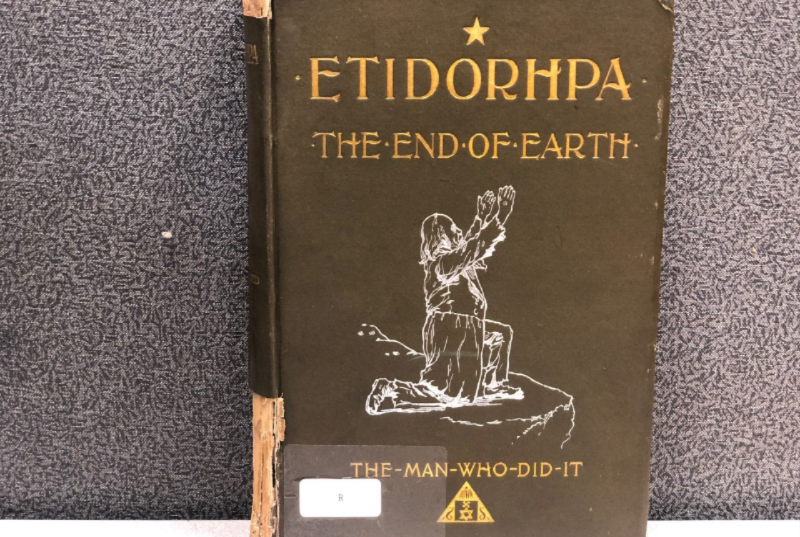 Etidorhpa: End of Earth, opens a new window by John Uri Lloyd
Did you know that the Cincinnati native pharmacist who would open up the Lloyd Library was also an author? And in 1895 wrote one of the strangest science fiction novels? Etidorhpa is about a man named Llewyllyn Drury who meets the inexplicable I-am-the-Man, who leads him on an alchemical journey through a Kentucky cave to the center of the Earth. 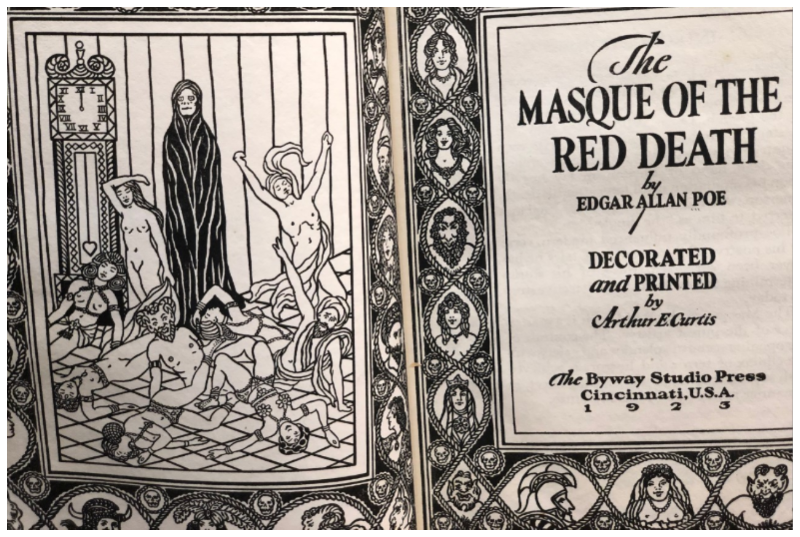 Masque of Red Death, opens a new window by Edgar Allan Poe illustrated by A.E. Curtis
Opening up this slim folio, I was treated to a psychedelic splash of fiery reds and autumnal oranges. I fully expected to find a Garcia bear hidden somewhere in the clouds of chaotic colors. As I turned the page, the thin paper felt lighter than normal when it dawned on me that all of the paper was home-made! There is a note that Arthur E. Curtis made, bound, and illustrated 200 signed copies here in Cincinnati in 1923. 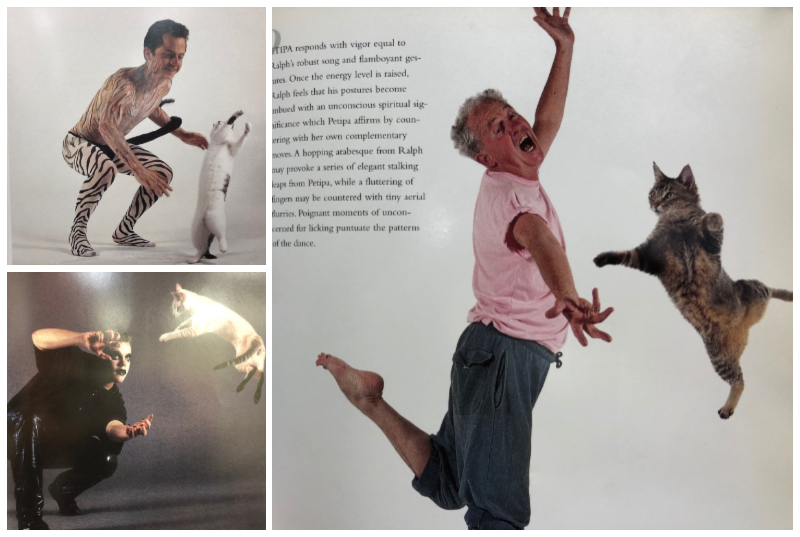 Dancing with Cats, opens a new window by Burton Silver
The real title of this book should be called Cats in Agony. It contains ninety pages of photographs of cats being thrown into the air, caught in mid-stretch, or judgmentally staring at their owners who are all gesticulating their bodies like they have never seen a dance move before, all of the humans wearing ridiculous outfits such as cat outfits, a goth boy, a man in his underwear. The photos are supposed to prove to you why you should dance with your cat, like your cat ever wants anything to do with you (until it catlike decides it does). Once you see this book, you cannot unsee it. 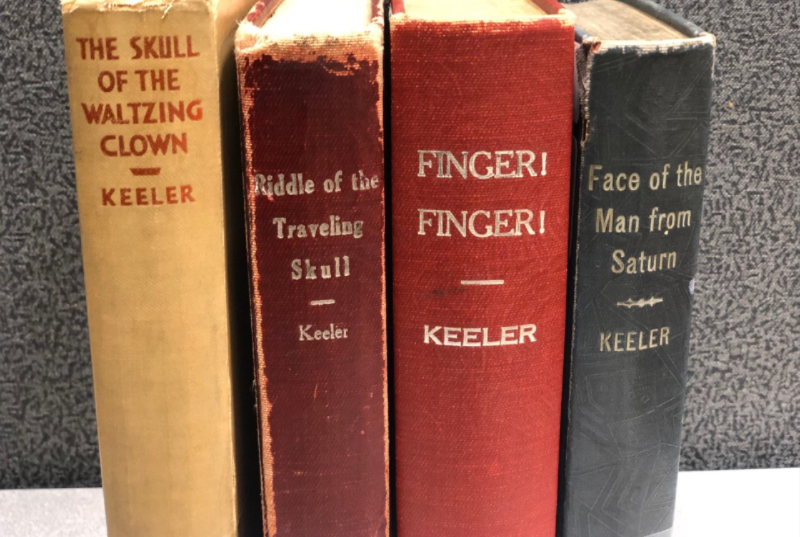 Harry Stephen Keeler books
Who? It is not surprising you have never heard of this mystery writer even though he published profusely between 1927 and 1942. You see, Harry Stephen Keeler is the Mystery Science Theater 3000 of authors. He is famously bad, but in that special comical way that makes failure better than success. Here are a couple of things he is notable for:

Xavier University used to have a Harry Stephen Keeler Society for his cult followers to talk about these permanently out-of-print novels.

There are many more eccentric, fun, historic, and interesting materials in our stacks that I'll highlight in my next blog post. Most of these books mentioned are reference books and can only be used at the Library, but if you ask nicely, I will certainly let you take home a few Harry Stephen Keeler books.