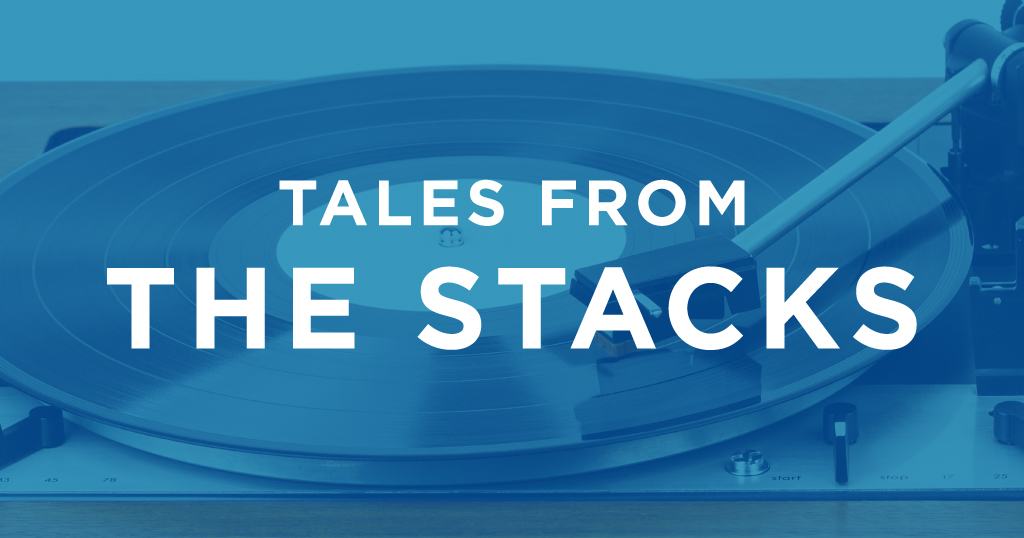 The other day, I placed a hold on Solange’s latest album When I Get Home, opens a new window. Curiosity moved me to take a field trip to investigate the large collection of vinyl records we have down in A-stacks. Now, last time I reported from A-stacks, opens a new window, I found all manners of strange and rare books. This time did not disappoint.

I spent an hour or two digging in the stacks. "Digging", in the parlance of record collectors, is when you spent a lot of time getting your knees dusty and hurting your back while you endlessly flip through the same five records you see at every store (I’m looking at you Whipped Cream and other Delights, opens a new window by Herp Alpert). Often it feels like you are stuck in a rut until you find that one golden treasure everyone else miraculously overlooked.
Here are some of the Library’s treasures.

The majority of records down in the stacks are the big, bulky box sets of operas and classical music which is not everyone’s cup of tea, but we have plenty of fabulous recordings by our own Cincinnati Symphonic and Pops Orchestras. Check out Tchaikovsky’s War of 1812 Overture, opens a new window directed by Erich Kunzel and recorded in Music Hall on September 6th and 8th, 1978.

Often overlooked in the stacks is the collection of recorded poetry and plays. Did you know you could listen to J.R.R. Tolkien read and sing excerpts out of The Hobbit and the Lord of the Rings, opens a new window? What a better way to spend a frigid winter night than to be cuddled underneath a blanket or by a fireplace as the famous chapter "Riddles in the Dark" crackles over your speakers.

Perhaps fantasy fiction is not your thing and you are itching to learn how to type. We got it. 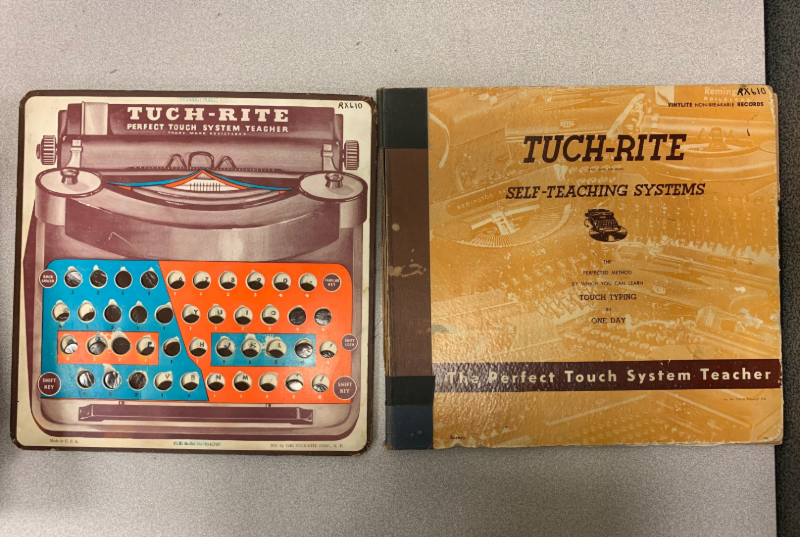 Developed in 1946 by Philip Gross, we have the Tuch-Rite Self-Teaching Systems, which comes with this fun cardboard cut-out of a typewriter that will help you master sliding plastic discs up and down just like a real typewriter. With this perfected method, you can learn how to type in one day, but only if you heed his warning not to skip ahead on the lessons. Mr. Gross also believes spelling is important but neglects to mention why he misspelled the word "touch" on his product.

Sometimes the power of album art can lead to an existential crisis. 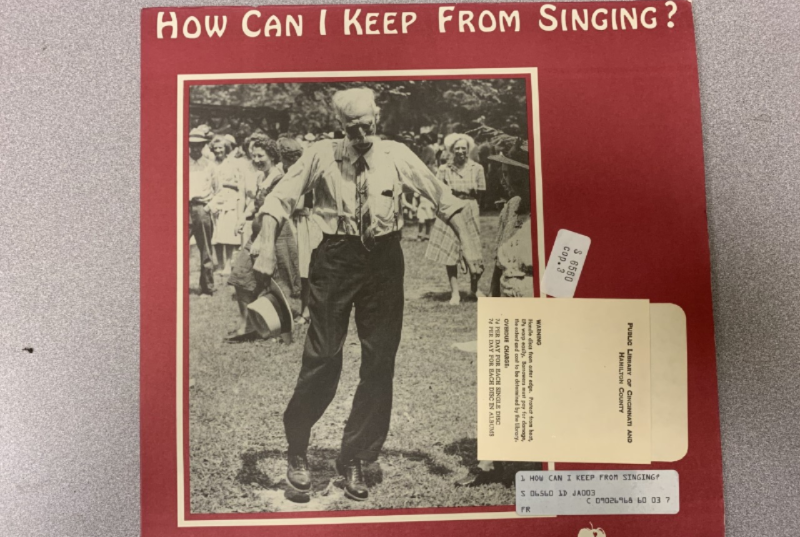 I mean, how can I keep from singing about that guy’s super wide mustache? My poor coworkers: I am about to serenade them with a rendition of “Wind Beneath My ‘Stache”.
Fun note about this album, opens a new window: it was recorded by June Appal Recordings, a non-profit media collective out of Whitesburg, Kentucky. They were founded to record Appalachian music and released materials from noted performers such as Buell Kazee, Nimrod Workman, and Lee Sexton. 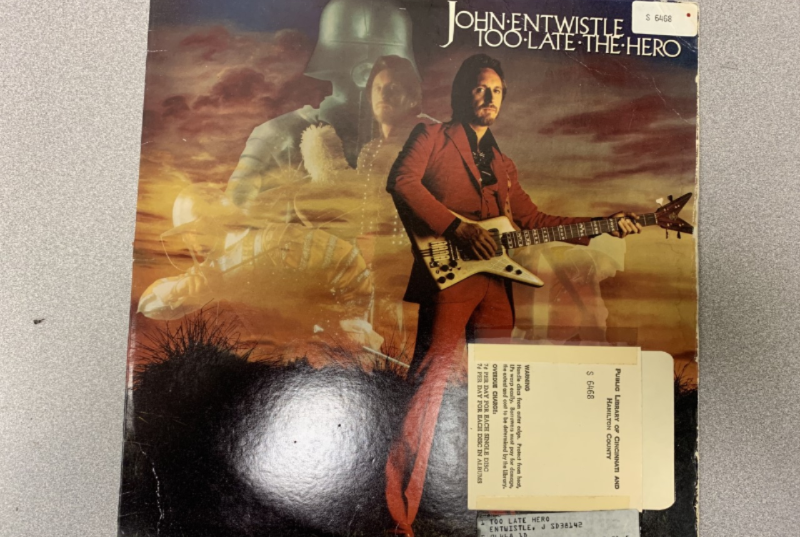 Naturally, when I saw this cover, I immediately understood the connection between a fencing foil and an Explorer-shaped bass guitar. Call and response; Allez and riposte, I get it. But then I turned the album, opens a new window over: 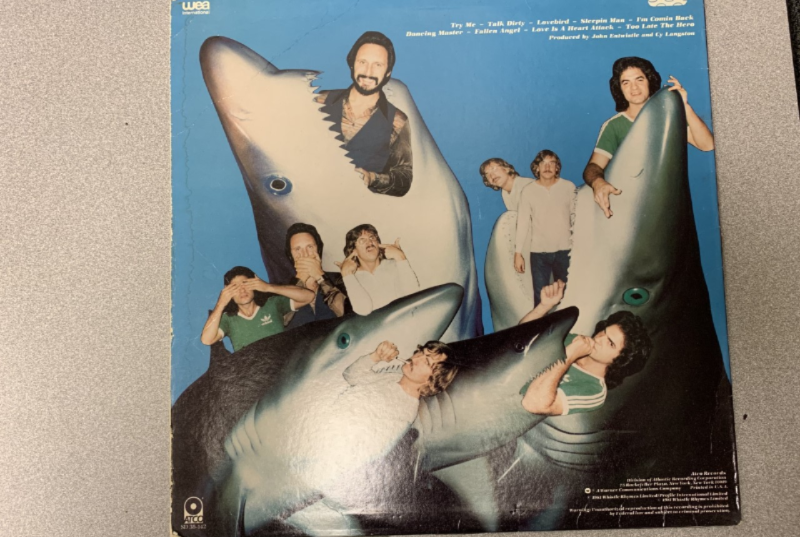 I hate it when I go to rock concerts and sharks eat the band before the encore. Serious waste of money. Also, if you have time to light a cigarette while being chewed upon by a great white shark, I’m going to have to suggest maybe quitting.

Sometimes the existential horror lies not in the art, but the very existence of the record. If you try to answer why Music Used in Many Popular Television Commercials, opens a new window exists, you are going to lose many, many nights of sleep. But if reminiscing about how you spent your money in the 1970s is the nostalgic trip you need to get through the day, the Library has you covered.

OMG. You can stream this album through the Folkways Records website. Well, the future is here, I guess.

Then we have The Sounds of Camp, opens a new window. With such riveting tracks such as “Before Lunch Music, Filing in to Tables”, “Eating, Happy Birthday” and the sleeper hit of 1959 “Jacks”, you too can fall asleep to the boring sounds of supervised childhood development. The linear notes really try to sell the “Jacks” track too, promising that “waves of jacks playing sweep over the camp each summer” and “the jacks fever begins usually somewhere around the middle of camp, and builds to a climax during the last week.” I don’t know if you heard my eyeballs rolling, but they sounded like a speeding semi going over a pothole.

If they ever make a sequel, I have some track title suggestions:
“Wedgies, Shaving Cream, and Other Camp Pranks”
“The Day of the Bellyflop”
“Returning Home, Tears”

There is only one way to end this post, opens a new window: 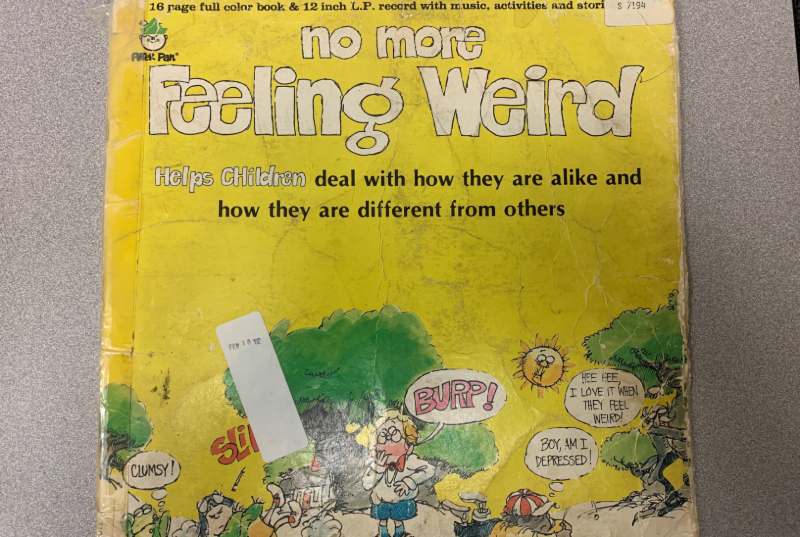