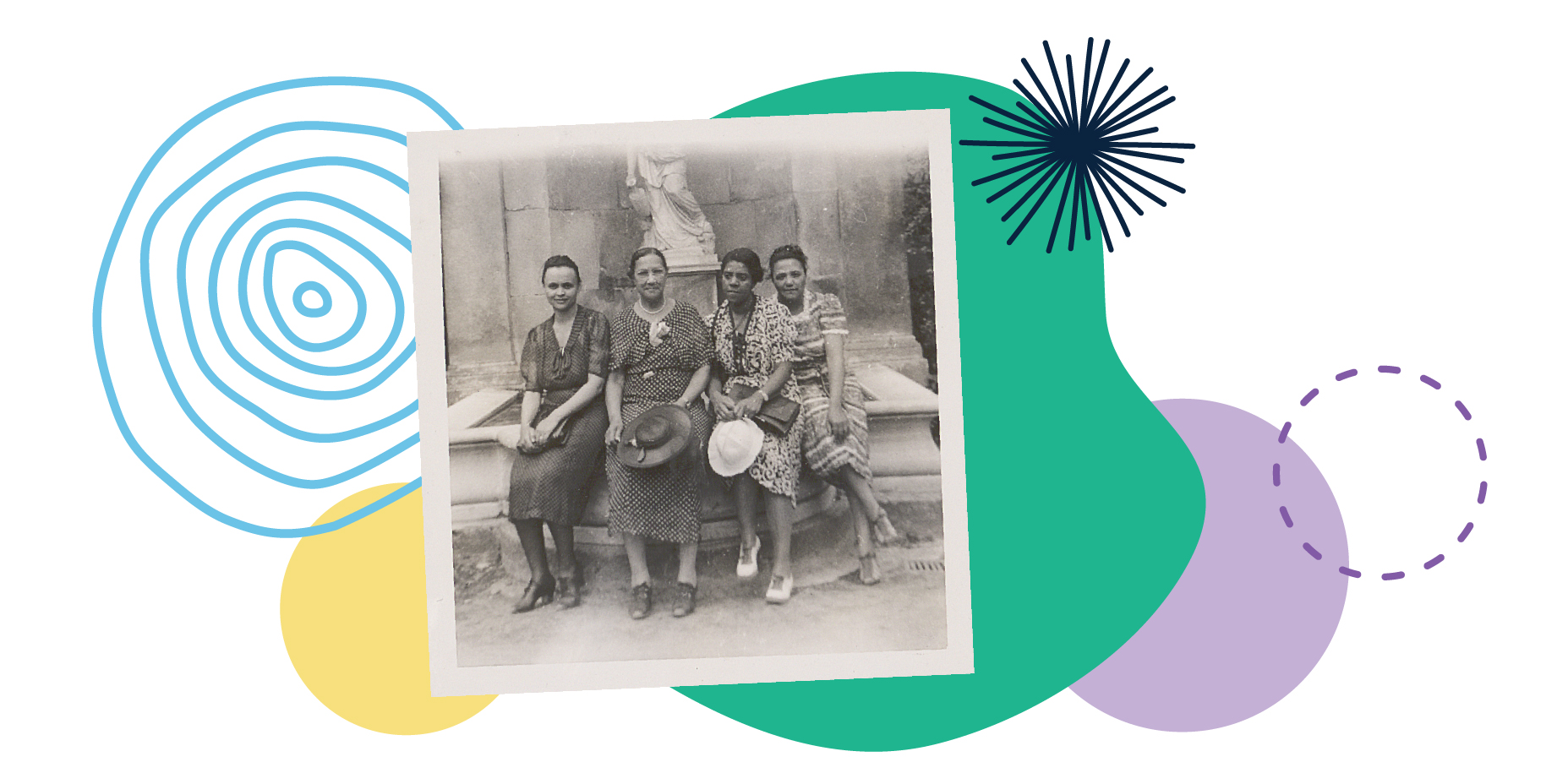 For centuries people have recorded handwritten family history, memories, recipes, and other information in diaries, journals, and family Bibles. As mass printing of materials became readily available in the 19th century, these “scrap” books were often filled with recipes, calling cards, greeting cards, newspaper articles, or other readily available printed material. When inexpensive personal cameras were first introduced in the early 1900s, candid photographs were a new and popular way to record and preserve experiences to share in very personal ways in these scrapbooks.

The Trip of a Lifetime

In 1938, Cincinnati educators Althea Hurst, Laura Knight, Margaret Duncan, and Martha Bush embarked on the adventure of a lifetime, an eight-week trip to Canada, Nazi Germany, France, Italy, Austria, and other European destinations. Their goal was to broaden their understanding beyond what was found in books and share those firsthand experiences with their students as a way of encouraging Black students to travel and expand their knowledge of other cultures. This scrapbook, created by Hurst, documents that trip.

In a handwritten note above the itinerary at the beginning of the scrapbook, Hurst said, “Travel gives authoritative knowledge of strange lands and peoples whose past and present cultures one desires to understand. A carefully planned itinerary allows sufficient time to enjoy and absorb impressions. A valuable disposition is made of each day and hour of travel. Travel is an investment paying lifetime dividends in rich memories.”

Hurst was a teacher in the West End at the Jackson School, a school for Black students that employed Black teachers who were not permitted to teach in other Cincinnati Public Schools at that time. At the time of the trip, she was married for only a few years to Joseph Hurst. She retired from the Cincinnati schools in 1961 and died in 1988, just a few months before Joseph.

She meticulously saved postcards, photographs, brochures, and other ephemera including correspondence planning the trip, the itinerary, and letters from a friend living in Budapest before, during, and after World War II.

The party traveled aboard the ship, Empress of Britain. Hurst saved photographs, brochures, menus and other mementos. She included the “Bon Voyage” marconigram (a message received by wireless telegraph) sent to her aboard ship by her husband. A commemorative booklet was added to the scrapbook when the Empress of Britain was later bombed and sunk during its wartime service.

Travel included accommodations aboard ships, trains, and in hotels that would not have been available to Black people in America in the 1930s due to the racial segregation imposed by Jim Crow laws. As they traveled through Germany and Austria just months before Kristallnacht or “Night of Broken Glass” violence enacted against Jews in Europe, Hurst documented the restrictions facing Jewish people with notations on pages with photographs of their Jewish guide. She wrote about signs posted, Juden Verboten or "Jews Forbidden” at stops along the way.

On a page devoted to Nürnberg (Nuremberg) she describes one photograph as “Five cornered tower built in 1494 by Hans Beheim(Sr.) for storing corn. Later used for stables. Torture tower. Now used for Youth’s barracks.”

Letters from her friend in Budapest are found in the back of the scrapbook. In October of 1939, Mizzi Klamer wrote, “Everyone is worried about one’s own fate: nobody knows whether it will not be necessary to leave home and country already the next day.”

In 1947 Klamer wrote, “we ask ourselves terrified, if it was all true, that we could survive all this?”

Despite the political climate, Hurst also finds beauty and joy in the sites and cities they visit. She provides personal notes on many of the pages to identify locations of the postcards and to record her impressions of the places and people, conveying her excitement at times at the “thrilling” ride on a gondola in Venice and noting that Praha (Prague) reminded them of Cincinnati with its hills and made them feel at home.

Dr. Houston Brummit, a friend of the Hurst’s, saved the scrapbook after the deaths of Althea and Joseph Hurst and donated it to the Library to fulfill Althea’s wish of inspiring Black children to travel and learn about different cultures.

The Althea Hurst Scrapbook has been digitized and is part of our rare books collection at the Downtown Main Library. It continues to inspire future generations.

View the scrapbook in our Digital Library.

Read the Preservation Lab blog describing the treatment and preservation of the scrapbook.