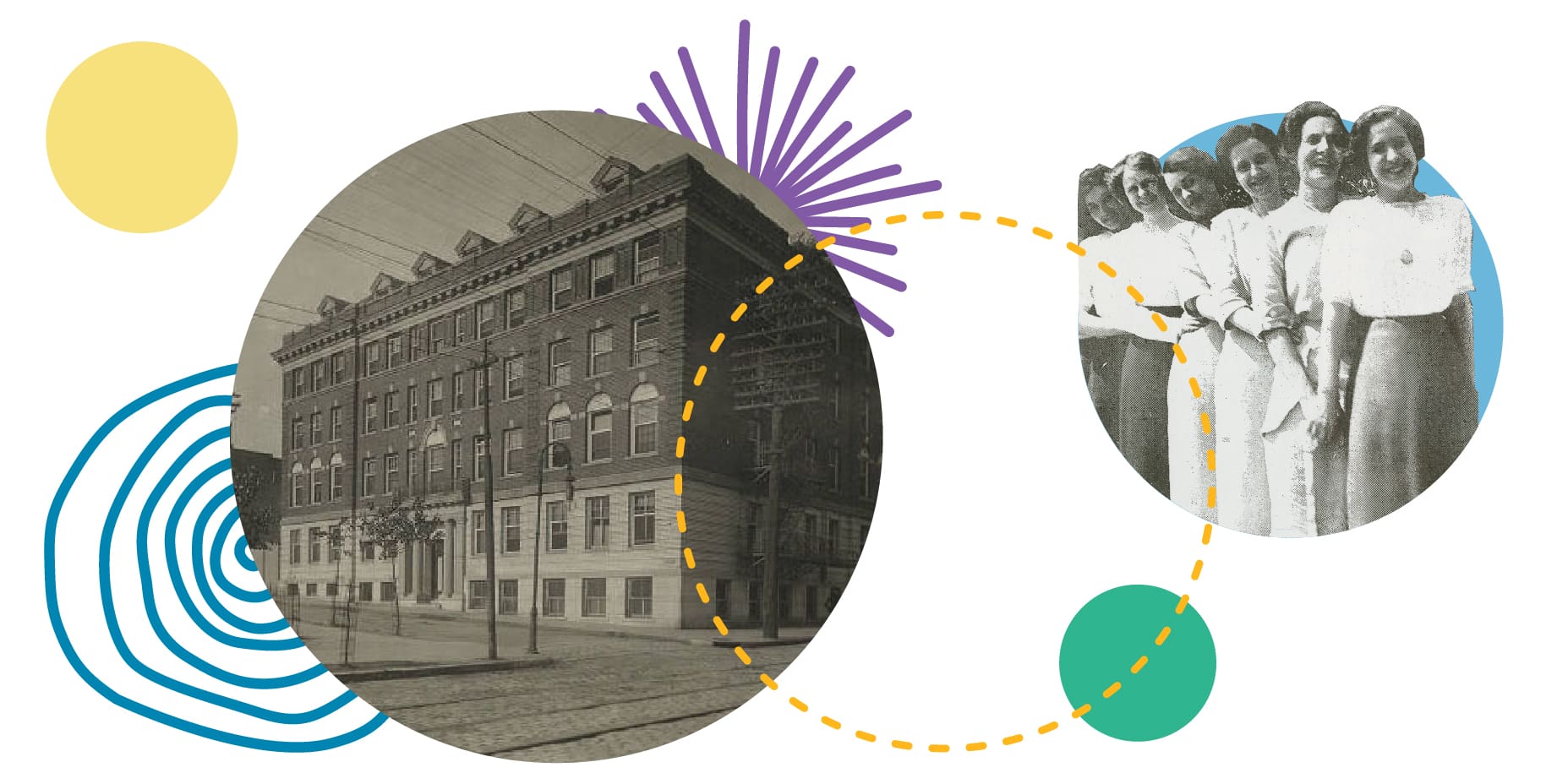 With the wave of industrialization in the late 1800s and early 1900s, more women were joining the workforce. At this time, sewing and housekeeping were the most popular jobs for women and many young women were attracted to jobs in Cincinnati’s booming city. While women were looking to work, most were only paid one-third to one-half of their male counterparts’ salaries. The belief of the time was that men had families to support while women lived at home or only worked until marriage. To make things even more challenging, many residences would not rent to women. For safety, women ate at more expensive restaurants, rather than cheaper, sometimes dangerous options like saloons.

Cincinnati Union Bethel recognized the need to provide safe, affordable housing for Cincinnati’s young businesswomen. And in 1858, after years of requests, The House of Mercy made Cincinnati one of three cities in the country to provide low-income housing for working women. By 1905, there were 293 rooms available and a long waiting list. Anna Sinton-Taft, the sister-in-law to soon-to-be President William Howard Taft, secured property at Third and Lytle streets to build a women’s hotel. With various donations including furnishings from Cincinnati’s most wealthy families, work began on the “Hotel for Working Girls,” soon renamed after the Taft’s daughter, Anna Louise. In May 1909, the Anna Louise Inn opened its doors. With 120 rooms, it became the largest residence in Cincinnati for women making $10 or less per week. At five stories tall, it included a lobby, several parlors, laundry facilities, a library, and a dining room. Various activities and religious services were included in a woman’s weekly rent which at that time was between $2.75 to $4.25.

After World War I, the Tafts donated $128,000 to construct a large, much-needed addition and by May 1920 the Inn had grown by an additional 150 rooms. While the number of women entering the workforce during World War II skyrocketed, by the 1960s numbers were dropping dramatically. Occupancy at the Inn in 1961 was 95 percent but by 1968 was down to just 50 percent. The 1970s were a time of adjustment for the Inn. A new generation of women meant adjusting to new needs in our city. The Inn began expanding its reach to include low-income women who were retired, disabled, or students. Some of the rules during this time included: no uncovered hair rollers outside your room, male visitors restricted to lobby or dining areas only, and “street clothes” required in common areas until 11 p.m.

By the 1980s, the Inn transitioned to accommodate Cincinnati’s disabled, abused, and elderly populations. Counselors were added to the staff as well as a night manager for crisis situations. As budgets became tight and fewer large-sum donations were received, the Inn found new ways of sustaining themselves. Procter & Gamble Co. began using part of the parlor as a daycare center for their employees. However, it was clear by the 1990s that major renovations to the Inn were necessary. For a residence that had weathered wars, depression, recession, and a changing culture, the Inn eventually could no longer continue operating. The Anna Louise Inn closed its doors and relocated its remaining services to the corner of Kinsey and Reading roads. The relocated Inn holds 24 dorms, 43 efficiency apartments, and 32 one-bedroom apartments. Today, Cincinnati Union Bethel, now known as HER Cincinnati (Housing, Education, and Recovery), continues the more than 100-year legacy of the Anna Louise Inn.

Follow in the footsteps of our Genealogy & Local History Department in their journey to tell the story of the Anna Louise Inn. Make new discoveries with resources used to inform this month’s Throwback Thursday post: