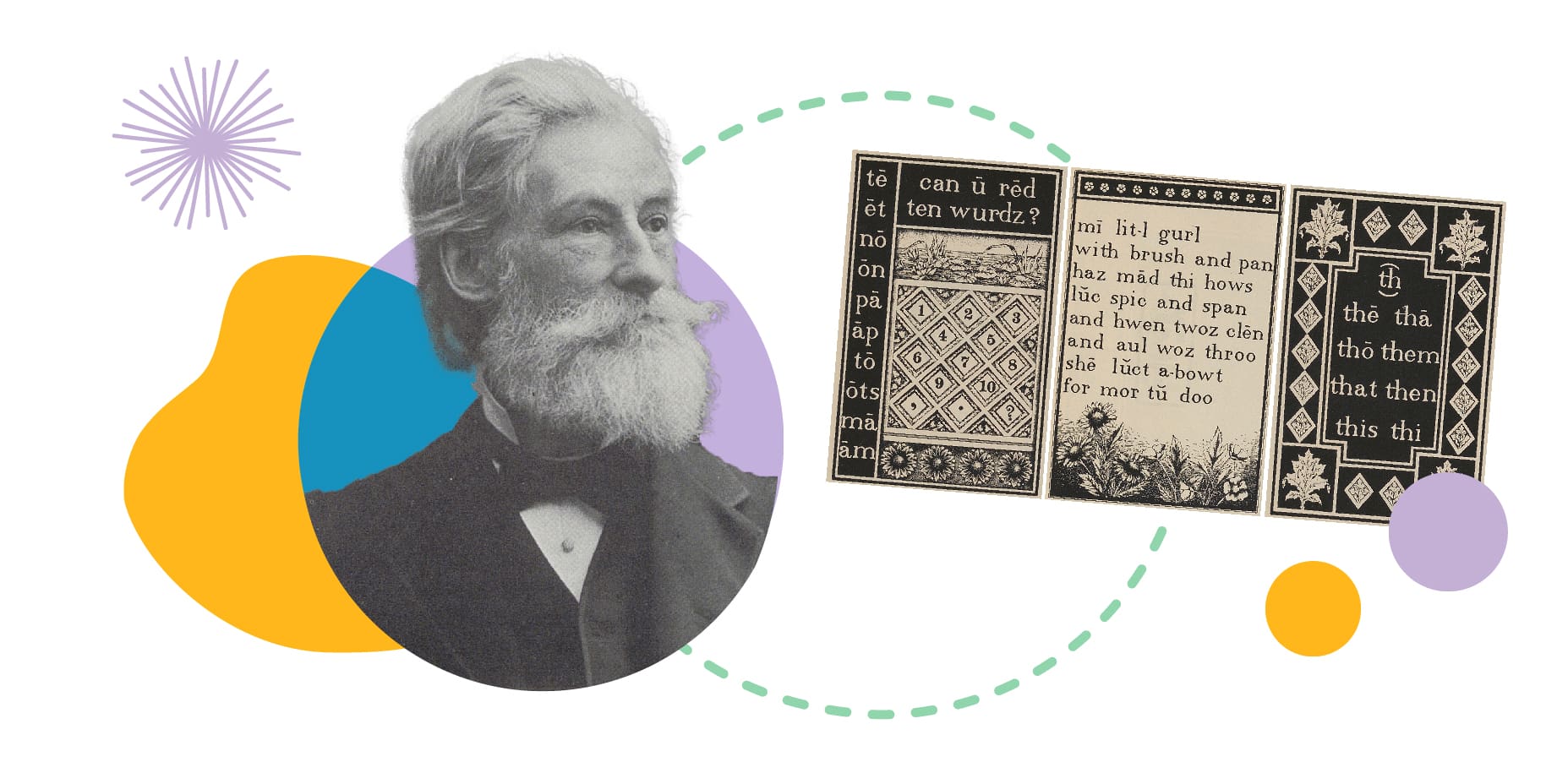 Benn Pitman, stenographer, author, artist, and teacher, had a varied career most noted for leaving a legacy as one of the founders of the American style of decorative arts. Born Benjamin Pitman, on July 24, 1822, in Trowbridge, England, he was the eighth of 11 children. His parents valued education, impressing its importance to their children. Benn went to live with his older brother Isaac’s family as a teen. There, he studied architecture and drafting as an apprentice under architect Thomas Lewis. His brother, Isaac Pitman, developed a simplified system of phonetic shorthand, eventually calling it “phonography.” Benn joined a team of salesmen and teachers traveling around England teaching and selling this system.

Benn and Jane Bragge were married on July 4, 1849. Their daughter, Agnes, was born in 1850, and their son, Arnold in 1851. Isaac Pitman insisted that the time was right to sell his system of phonography in the United States and so Benn and Jane made the crossing to Philadelphia in the winter of 1853 although Jane was pregnant with their third child. Shortly after arrival, their son, Ellis, was born and soon died as did young Arnold. The family spent six months in Philadelphia while Benn taught shorthand classes. Pitman was invited to speak at a teacher’s conference in Dayton, Ohio and then moved to Cincinnati to establish a base to publish and sell Isaac’s phonographic system. Benn was determined to teach Isaac’s system in America, however, when Isaac later made changes to the system Benn refused to adopt the changes, believing the original system was better.

Pitman established a company in Cincinnati publishing books on phonography, including books for children. The borders in some of his books are embellished with sketches of natural elements showing his talent as an artist and the inspiration he would later use in his furniture and architectural designs.

Pitman promoted the use of the Pitman phonography system as a superior way to teach children to read, explaining in his book, Child’s First Reader, opens a new window, “It teaches the child the elementary Sounds of speech by an Alphabet in which there is no varying of the powers of letters, nor contradiction in their use so that Reading and Spelling are made easy and pleasant of acquirement.” He presented this system to the schools in Cincinnati but failed to convince them to adopt the system. Pitman also served as a court reporter including the trial of the assassins of President Lincoln and other historically significant court proceedings, opens a new window.

Teaching at the McMicken School of Design

In 1873, Benn Pitman began teaching popular classes in wood carving at the McMicken School of Design, later the Art Academy of Cincinnati. Classes were free and although open to men and women, the students were mostly women of means. Women whose names were often found on Cincinnati’s social register attended as wood carving was an acceptable way to occupy their time. Furniture was disassembled and pieces carved, then reassembled after the women had completed carving the pieces. Many smaller decorative items for the home were also produced.

In 1878, an enormous Hook and Hastings organ was installed in Music Hall. The organ featured 121 wood panels carved by female students of Benn Pitman, Henry Fry, and Fry’s son, William. The organ was meticulously decorated with a theme of music with composers and nature represented in the carvings. When the organ was dismantled during renovation, the panels were sold or given away. Some of the panels have been recovered and are now on display at Cincinnati Music Hall. View photographs of the organ in our Cincinnati Photo and Print File collection on our Digital Library, opens a new window.

Read more history of the organ and the loss and eventual recovery of the wood panels on the Friends of Music Hall website, opens a new window.

Just a few years after Jane Pitman’s death in February 1878, Benn married one of his former students from the McMicken College of Art. On August 10, 1882, Benn, 60, married Adelaide Nourse, 22. The bedstead pictured was created to commemorate their marriage. He designed the bedstead and the dresser that were used in their home. Adelaide carved the pieces and her twin sister, noted artist Elizabeth Nourse, painted the panels on the bedstead and is believed to have painted the panels on the dresser.

The home built by the Pitmans in 1887 still stands today on Columbia Parkway. It featured many furniture pieces and architectural elements inspired by nature and carved by Adelaide, Agnes Pitman, and others. Adelaide and Benn had only a short time together; she died at age of 35 of tuberculosis on September 12, 1893.

Pitman changed careers in 1893, returning to the business of publishing books and promoting the Pitman shorthand system. He was recognized in his lifetime as the father of American phonography, however, John Gregg also developed a competing phonetic shorthand system in 1888. Being consistently adapted into more efficient systems over time, Gregg’s system became popular in America. And with devices such as shorthand machines and personal devices used to record notes by typing or with audio recordings, the use of shorthand declined.

Benn Pitman died in his home on December 28, 1910. Several years after his death he was recognized by the National Shorthand Reporters’ Association with a bronze bust installed at the Cincinnati & Hamilton County Public Library. The inscription reads, “Erected and Dedicated August 23, A. D. 1913 By the National Shorthand Association in recognition of its indebtedness to its beloved and honored late President Benn Pitman (A. D. 1906-1907), and in further recognition of his services to the development and propagation of phonetic shorthand.”, Cincinnati Enquirer, August 23, 1913, p. 15.

Follow in the footsteps of our Genealogy & Local History Department in their journey to tell the origins of phonography in America and the life of Benn Pitman through our Digital Library of high-resolution photos and documents, library catalog, and resources used to inform this month’s Throwback Thursday post:

The Assassination of President Lincoln

Find more to explore about Benn Pittman in our collection, opens a new window.