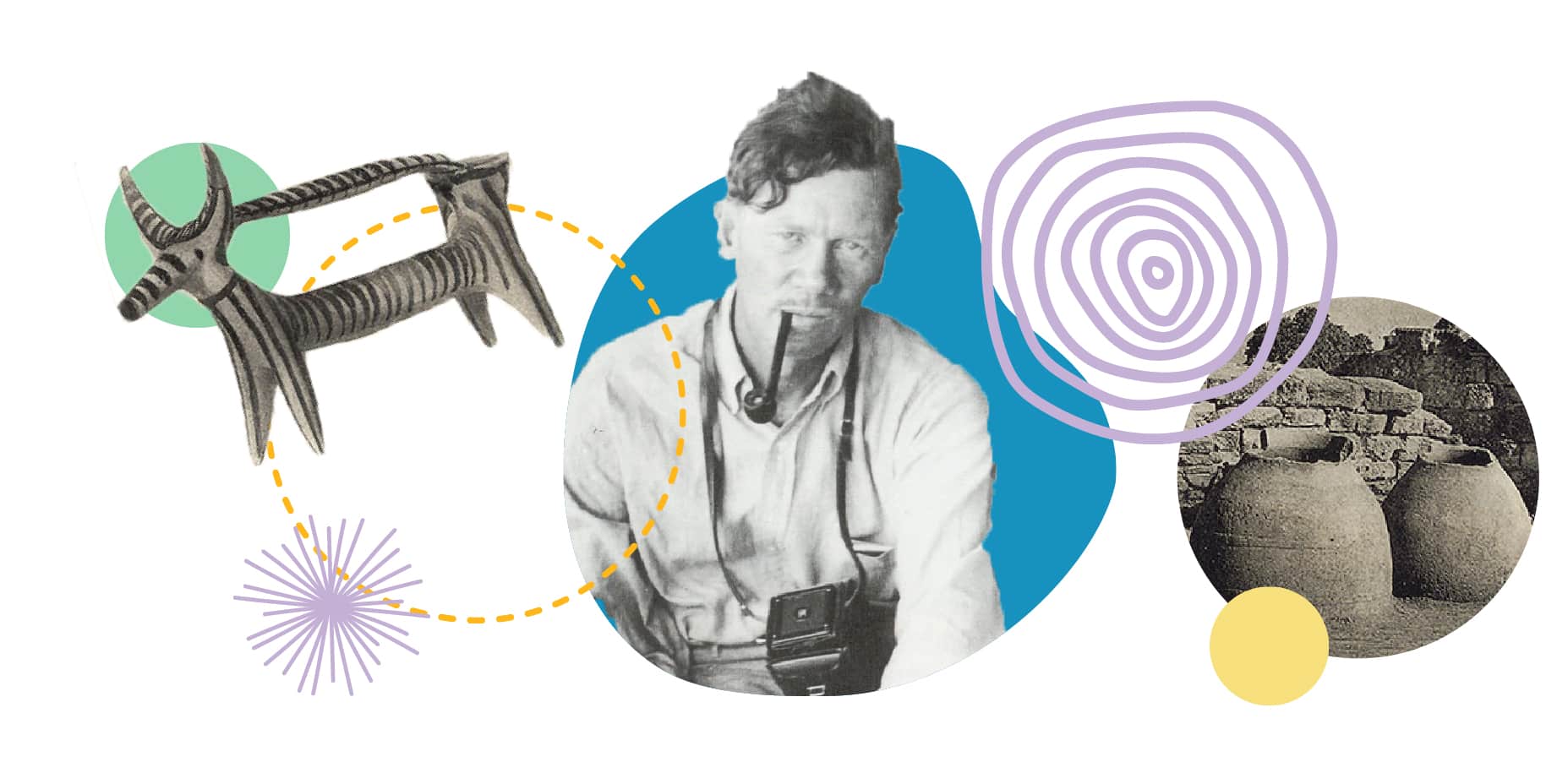 The Iliad and Odyssey shifted from legend to a work based in historically-accurate settings thanks to an archeologist teaching at the University of Cincinnati (UC). Join us as we explore the life and the many landmark archeological discoveries of professor Carl Blegen.

Carl Blegen was born in Minnesota in 1887 and received his bachelor’s degree from the University of Minnesota and his graduate degree from Yale.

His life was entwined with three other people—his wife, Elizabeth Pierce (1888), her mentor and lover, Ida Thallon (1875), and his mentor and friend, Bert Hodge Hill (1874). They were all involved in ancient Grecian archaeology and the American School of Classical Studies in Athens, Greece.

Thallon and Pierce met at Vassar College, where Thallon was her professor. It’s not known when they began a relationship, but when Pierce returned to Vassar as a professor, they had adjacent rooms. She traveled with Thallon to Greece in 1921 and enrolled in the American School of Classical Studies, where she met Bert Hodge Hill and Carl Blegen. Blegen was smitten with her and while Pierce initially didn’t reciprocate, his strong feelings caused her to develop them as well. He proposed marriage and while she initially accepted, she soon broke it off as she didn’t want to end her relationship with Thallon, though a broken-hearted Thallon had given the marriage her blessing.

Blegen made a new proposal with his friend and mentor Bert Hodge Hill. Blegen and Pierce would marry, as would Hill and Thallon, who were already friends, and the four of them would all live together. Finalizing the proposal’s details were a bit tumultuous, but via many letters they worked out an agreement. One key arrangement was both women would still travel together on their own, and the men would do the same. It was agreed and the couples married in 1924. While there was some indication Hill might’ve had feelings for Blegen, they appear unreciprocated.

The four nicknamed themselves the “Pro Par,” short for professional partnership, and “The Family.” They mutually supported each other and their scholarship, with many of them writing research or doing excavations together. While the group frequently split up to travel, they remained a quartet until the end of their lives.

The “Pro Par” worked on multiple excavations. Thallon was one of the first women to excavate in Greece in 1905. Blegen worked at many sites, the most notable being Troy and the Palace of Nestor at Pylos after he joined UC’s Classics Department in 1927. He worked with William Semple, whose wife Anna Louise Taft–grandniece of President Taft–supplied much of the funding. UC’s former Main Library building, which now houses the Classics and Rare Books collections, is named after him.

Before the excavations at Troy and Nestor’s Palace, the events in the Illiad and Odyssey were regarded as legend without any basis in fact. The discovery of ruins at Troy brought much excitement. Early work was done by a German businessman who didn’t methodically document his finds, leaving out what he deemed insignificant in his zeal. Blegen was the first professional archaeologist to excavate Troy.

Blegen didn’t take Homer’s works as historical accounts—he did not think Helen of Troy was an actual woman who existed—but the excavations proved the places referenced were real and occupied in the right period, after Blegen sorted the strata.

Once done with Troy, UC partnered with the Greek Archaeological Service and found remains in Pylos near previously discovered tombs. This was dubbed Nestor’s Palace and contained many remarkable finds. But the excavations were paused in 1939 by World War II. The Blegens and Thallon returned to the United States while Hill remained in Greece to look after their home. They resumed digging in 1952.

Thallon died in 1954, while traveling with Pierce. Pierce suffered a stroke in 1956 but recovered enough to continue excavating with the aid of a wheelchair. Hill died in 1958. Pierce died in 1966. Blegen retired from UC in 1965 and died in 1971. They are all buried together in a cemetery in Athens. The quartet influenced a generation of classical scholars in a legacy that continues to this day.

The area Blegen uncovered is still revealing remarkable insights into history. In 2015 another professorial couple from UC came across a grave site near Nestor’s Palace with a wealth of items, nicknamed the Griffin Warrior Tomb. Among the items was an intricately carved piece of agate that caused scholars to reevaluate what craftsmanship was possible at the time.

In 2016 a walkway and cover were constructed over Nestor’s Palace, opening the site to the public viewing without damaging these historical sites.

Follow in the footsteps of our Genealogy & Local History Department in their journey to tell the discoveries and legacy of Carl Blegen through our Digital Library, library catalog, and resources used to inform this month’s Throwback Thursday post:

Read more Throwback Thursday blog posts, opens a new window from our Library's our Genealogy and Local History Department and visit our Digital Library, opens a new window for high resolution digital access to our rare print materials, especially those of local significance.