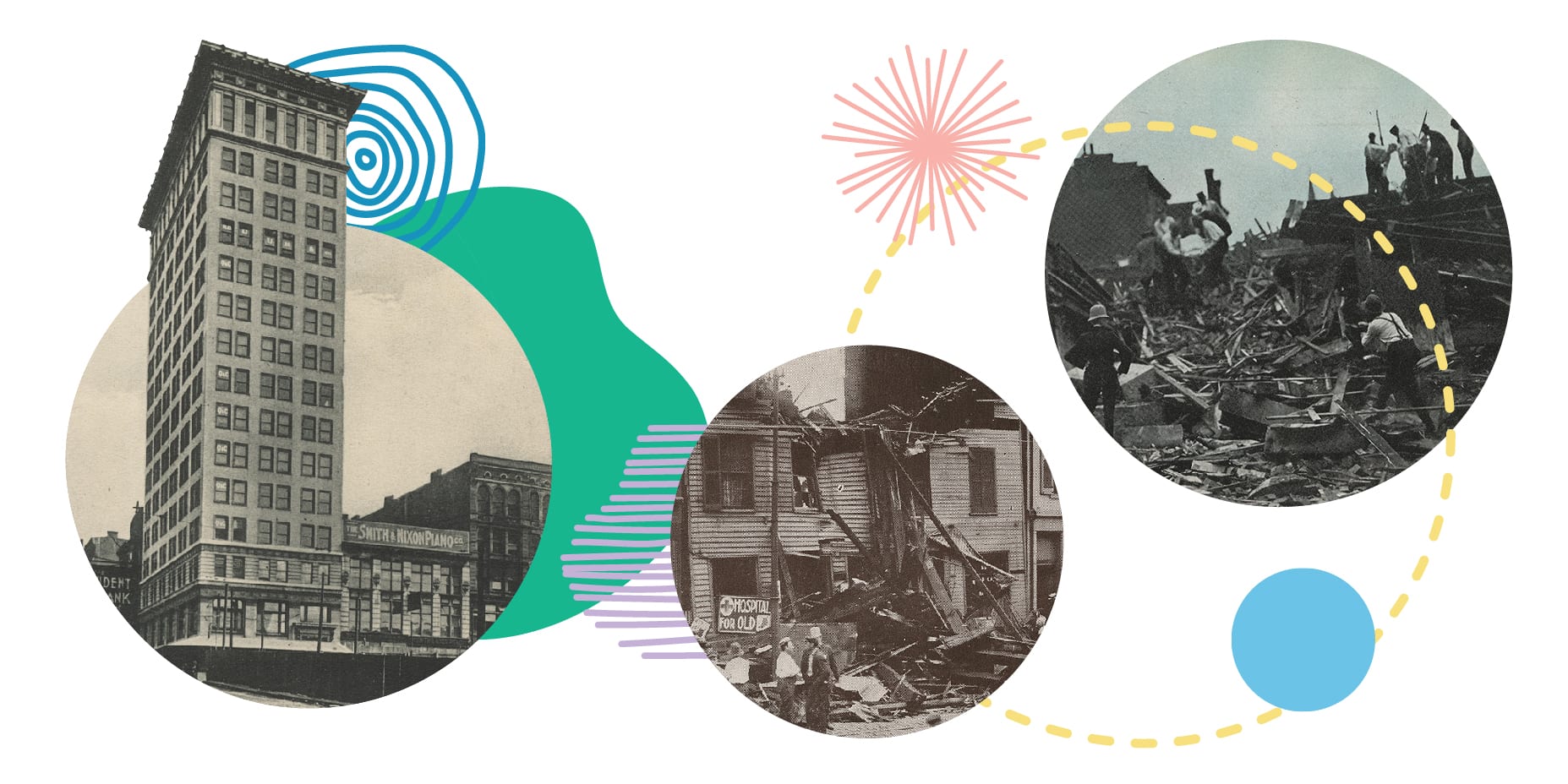 On the night of July 7, 1915, Cincinnati was hit by the most damaging storm in its history. In the course of ten short minutes, powerful straight-line winds destroyed property, derailed trains, sank multiple boats, collapsed six buildings, and left 38 people dead. Later media reports would refer to the event as a "tornado" or "cyclone," but it is now believed that the storm was a weather event known as a microburst, which can produce wind speeds equivalent to an EF-1 tornado.

The summer of 1915 had been an unseasonably cool and pleasant one in Cincinnati, and there was no reason to believe that Wednesday, July 7 would be any different. The National Weather Service had predicted an evening storm, but it is doubtful that anyone considered the coming squall to be anything worse than an inconvenience. Life in the city carried on as usual. On the Covington riverfront, the steamer Convoy had just finished unloading its cargo of coal and was preparing to set off on a return trip to its home port of Point Pleasant, West Virginia.

Across the river, a Wednesday night euchre game was in progress at St. Philomena’s Catholic Church on East Third and Pearl streets. Built in 1846, St. Philomena’s steeple was a local landmark and a distinctive feature of Cincinnati’s skyline.

On East Fourth Street, the night shift of the Western Union Telegraph Company was busy at work in their office atop the Ingalls Building, the city’s first modern skyscraper, which had been the company’s local headquarters since 1906.

On West Sixth Street, in the city's densely populated West End, Harry Yanofsky's billiard room was busy with customers. Soon more people would be ducking inside to escape the coming rain. Next door at 574 West Sixth Street, Henry Rizzo and his employees were at work in his one-story fruit store.

Louis Cohen, a Russian immigrant, ran a grocery store at 570 West Sixth Street and lived in an apartment above the shop with his wife Esther and their children. Esther had long been concerned about the poor condition of the building, which she described as being “shaky." Some of its decaying joists had been replaced, but the structure was still unstable, and she feared for the safety of her children. Two blocks away on West Eighth Street, Esther Cohen’s cousin Sadie Tenenbaum lived with her husband, Israel, and their children.

The western sky darkened in the early evening, and distant thunder could be heard. The electrical storm intensified around 8:30 p.m. as the storm approached, but no one was prepared for what came next.

As predicted by the National Weather Service, a large storm system developed over the Missouri River Valley during the afternoon. Tornado-force winds were soon tearing across the plains, knocking down a Catholic Church in the town of St. Charles, ripping the roof off of a hospital, and taking down the three-mile-long Wabash Railroad bridge over the Missouri River. Telegraph lines had been damaged, so local authorities received no forewarning of the danger as the winds blew east over Illinois and Indiana.

The storm broke at 9:29 p.m. Straightline winds and a torrential downpour slammed into the unexpecting city with a ferocity the stunned survivors would never forget. Communications with the outside world were severed when the windows of the Western Union Telegraph Company’s office were shattered and the equipment was soaked with rainwater. Many of the panicked workers ran downstairs, believing there had been an earthquake. Nearby on Fountain Square, the Postal Telegraph Company was likewise unable to send or receive messages after 9:30 p.m. Uprooted trees and fallen limbs had taken down telegraph lines across the city.

The coal steamer Convoy was mid-river when the storm hit, having just departed for Point Pleasant. Captain W.C. Curry attempted to return to the riverfront but the steamer, sitting high in the water after unloading its cargo, was blown over and quickly sank, opens a new window near the Southern Railroad bridge. Curry was able to sound the alarm before the ship went down, but the roustabouts and deck hands who were resting below deck were unable to make it out before the ship went under. Six crew members were killed, including Chief Engineer John Smith and the cook, Betsy Smith. The Dick Fulton, another coal steamer, also capsized.

James Allen, Chief Officer of the Ohio Humane Society, was killed by falling rubble when the roof of the Odd Fellows’ Temple was blown away. The water tank from the nearby Burnett House was torn off of its moorings and crashed onto the corner of Third and Vine streets. Sigma Kappa Fraternity members meeting in the hotel below reported a sound like an earthquake as the roof came off. The streets were littered with rubble, broken glass, twisted signs, and downed power lines.

The worst of the destruction was in the West End, where five buildings collapsed on Sixth Street near Mound Street, leaving dozens of people buried under the rubble. The five-story brick building that housed Harry Yanofsky’s crowded billiard room collapsed. Max Crigger, John Hampton, and Peter Fagin died in the collapse. Nathan Carl, who lived on West Ninth Street, saved his own life when he dove under a counter as the building came crashing down. Carl would remain buried there for nine hours awaiting rescue. Harry Yanofsky was buried under a massive pile of rubble. Later that night, rescuers would hear Yanofsky pleading for water as they searched for survivors. He was eventually found alive and sent to Seton Hospital, where he died of his injuries later that morning. He was 40 years old. His son was pulled alive from the wreckage and survived.

Henry Rizzo's one-story fruit store was badly damaged. Rizzo escaped, and the young shop boy was pulled to safety before the building finally collapsed. Peggy Budemeyer, another employee, escaped the wreckage by crawling through a chimney. Behind Rizzo’s, a two-story brick building housing two Black families collapsed. 31-year-old Henry Hampton was able to escape, but his brother was later found among the dead inside.

The Cohen family's unstable three-story brick building collapsed, killing the entire family. The Tennenbaum's house on Eighth Street also collapsed. Israel, who survived the incident, was preparing to put his seven-year-old daughter Jeanette to bed when the storm hit. The last thing he remembered was the sound of the wind followed by a huge crashing sound. Eighteen-year-old Nettie Tennenbaum and her sister Sylvia witnessed the house collapsing as they ran home through the rain.

Rescue efforts continued through the night and into the morning and the following day. Forty survivors were trapped in cellars and in the rubble of fallen buildings. Police, firefighters, and volunteers dug through the ruins searching for survivors, many of whom could be heard calling for help. Thousands of gawkers, distraught family members, and stunned neighbors filled the streets near the devastation.

The Hotel Sterling, opens a new window at Sixth and Mound streets became a temporary hospital and a refuge for homeless families. It was reported that the city morgue held more bodies than on any other day in its history.

The Tennenbaum and Cohen families lost 11 family members in the storm. It was a disaster for Cincinnati’s Jewish community. Their funeral on July 9 was said to be one of the largest ever held in the city.

All told, the scope of the loss was staggering. Thirty-eight had died, dozens were injured, and the cost of the damage was estimated to be more than one million dollars. Coming disasters, such as the flood of 1937, would overshadow the Great Windstorm of 1915, but the furious winds would never be forgotten by those who lived through them.

Follow in the footsteps of our Genealogy & Local History Department in their journey to tell the tragic happenings of the Great Windstorm of 1915. View high-resolution photos and documents in our Digital Library, opens a new window, library catalog, and resources used to inform this month’s Throwback Thursday post:

Annual report of the Cincinnati Chamber of Commerce and Merchants' Exchange 1915. View in the Digital Library.

They Built A City

When the Sky Breaks