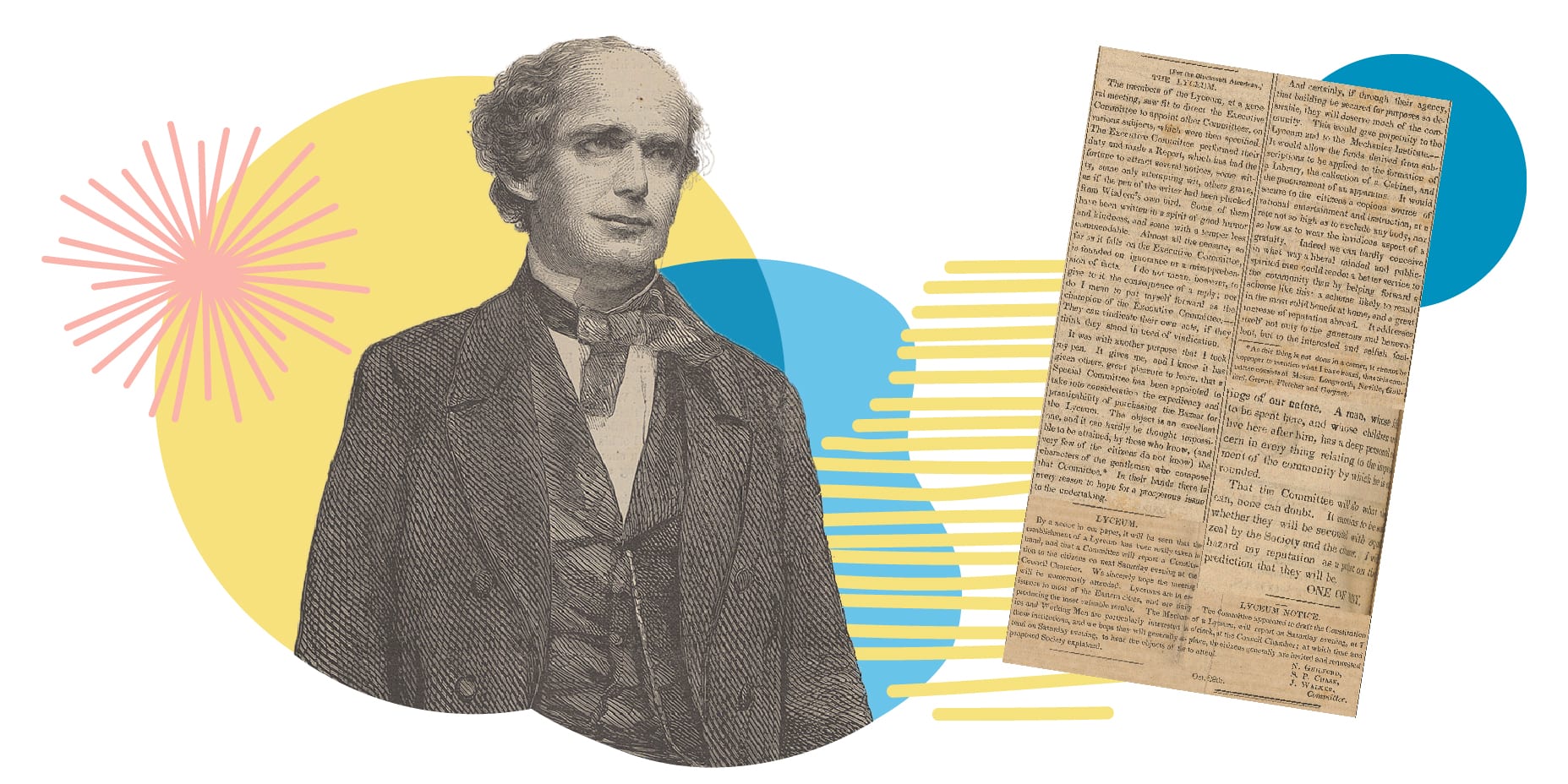 Readers of the newspaper Cincinnati American in the 1830s surely noticed a young contributor who frequently wrote about antislavery and had an inkling for politics. Join us as we share the story of Salmon Chase, a Cincinnati lawyer and writer who become Governor of Ohio, a U.S. Senator, Secretary of the Treasury, Supreme Court Justice, and namesake of one of the largest banks in the world.

Salmon Portland Chase was born in Cornish, New Hampshire on January 13, 1808 into a family of highly successful farmers, growing up in a household where work, self-improvement, and religion were interchangeable. He attended Dartmouth College and studied law under Attorney General William Wirt.

After passing the bar examination in 1829, Chase moved to Cincinnati. There, he established his own law practice and formed the Cincinnati Lyceum in 1830. The Cincinnati Lyceum was a scientific and literary association founded for the purpose of creating a public library and raising money to hold educational lectures.

Chase earned his money by writing articles for the newspaper Cincinnati American about politics, American currency, and slavery. He was a member of the Whig party and classified himself as an antislavery man versus an abolitionist. Chase felt that slavery was a moral sin, but held the stance that the federal government could not emancipate the people in slavery. Rather, slavery should not be supported and assisted by the federal government. He contested that the Constitution tolerated slavery but was not authorized to create slavery, therefore, it could only exist via state law. Chase argued that once an enslaved person left the bonds of slavery by any means, they then cease to be a slave and are therefore free.

While practicing law in Cincinnati, Chase defended people who escaped slavery and people who were tried for assisting them. Cincinnati’s economy at this time was partially dependent on Southern business connections. Even though Ohio was a free state, the climate in Cincinnati was generally more pro-slavery. Chase earned the nickname in Cincinnati, the “Attorney General for Fugitive Slaves.”

Chase was elected as a Whig to the Cincinnati City Council in 1840. The following year, however, Chase left the Whigs to form and lead the Liberty Party in Ohio. Leading a new political party was a daunting task and in 1848 Chase began to merge his ideals with the already existing Free-Soil Party. His efforts proved fruitful and Chase was elected to the U.S. Senate for Ohio in 1849. Chase’s goal was never to create or belong to a political party, rather, he wanted to pressure the Northern Democrats to oppose the extension of slavery.

While in Cincinnati, Chase also met his first wife Catherine Jane Garniss. After their first unimpressive meeting in 1831, Chase gave very little thought about Catherine, until 1833 when Chase was forced to move into a boarding house due to the illness of his brother-in-law. The Garniss family was also living there and a romance between Chase and Catherine began. They were married on March 4, 1834 by Reverend Lyman Beecher. After the birth of their first and only child, Catherine’s health began to decline. Chase was reluctantly traveling to Philadelphia for a business trip when he received a letter informing him that Catherine had died. His grief fueled him to renew his faith and he was an active member of St. Paul Episcopal Cathedral.

Governor of Ohio and the Republican Party

While serving in the U.S. Senate, Chase became one of the main voices in the opposition of slavery in the South. He opposed the Compromise of 1850, the Kansas-Nebraska Act of 1854, and helped in the formation of the Republican Party. Chase was elected governor of Ohio in 1856, becoming the first Republican governor of Ohio. While serving as governor, he improved property rights laws for women, focused on prison reform and made positive changes to public education.

A Dream For Presidency

In 1860, Chase decided to take his ideas nationwide and ran for president as a Republican against Abraham Lincoln. At the time, Chase was the more prominent and qualified Republican, but due to stigma around his former association with the Whig party, he had very little support outside of Ohio. Lincoln won the nomination and became the 16th President of the United States. Chase supported Lincoln and was invited personally by him to serve as Secretary of the Treasury.

In 1864, Chase was nominated by Lincoln as Chief Justice. In this role, he presided over many high-profile cases of the time, including the impeachment trial of President Andrew Johnson in 1868. The aspiration for the presidency never ceased and Chase unsuccessfully sought the Democratic nomination in 1868 and the Liberal Republican nomination in 1872.

Salmon P Chase served as Secretary of the Treasury in Lincoln’s cabinet from 1861-1864. American currency before the Civil War was a mix of imported coins and a bank note system issued by banks and monitored by state legislatures. Chase noticed that this system of currency was unstable and forgery was an increasing problem. He suggested the idea of establishing a national banking system as well as introducing paper currency. The proposal to Congress not only established a stable national currency but it also secured a market for government bonds and ensured the Union could not sell debt to pay for the war effort. The Chase National Bank, also known now as JPMorgan and Chase was named in honor of Salmon P. Chase.

Chase died of a stroke in New York City on May 7, 1873. The Supreme Court honored his death by placing a black wool crêpe over the bench Chase occupied, as well as hanging a black crêpe over the courtroom doors. This tradition is still carried out today when a Supreme Court Justice dies in office. Salmon P. Chase is buried in Spring Grove Cemetery and his birthplace in New Hampshire is a National Historic Landmark.

Follow in the footsteps of our Genealogy & Local History Department as they share the story of Salmon P. Chase. View high-resolution photos and documents in our Digital Library, library catalog, and resources used to inform this month’s Throwback Thursday post: