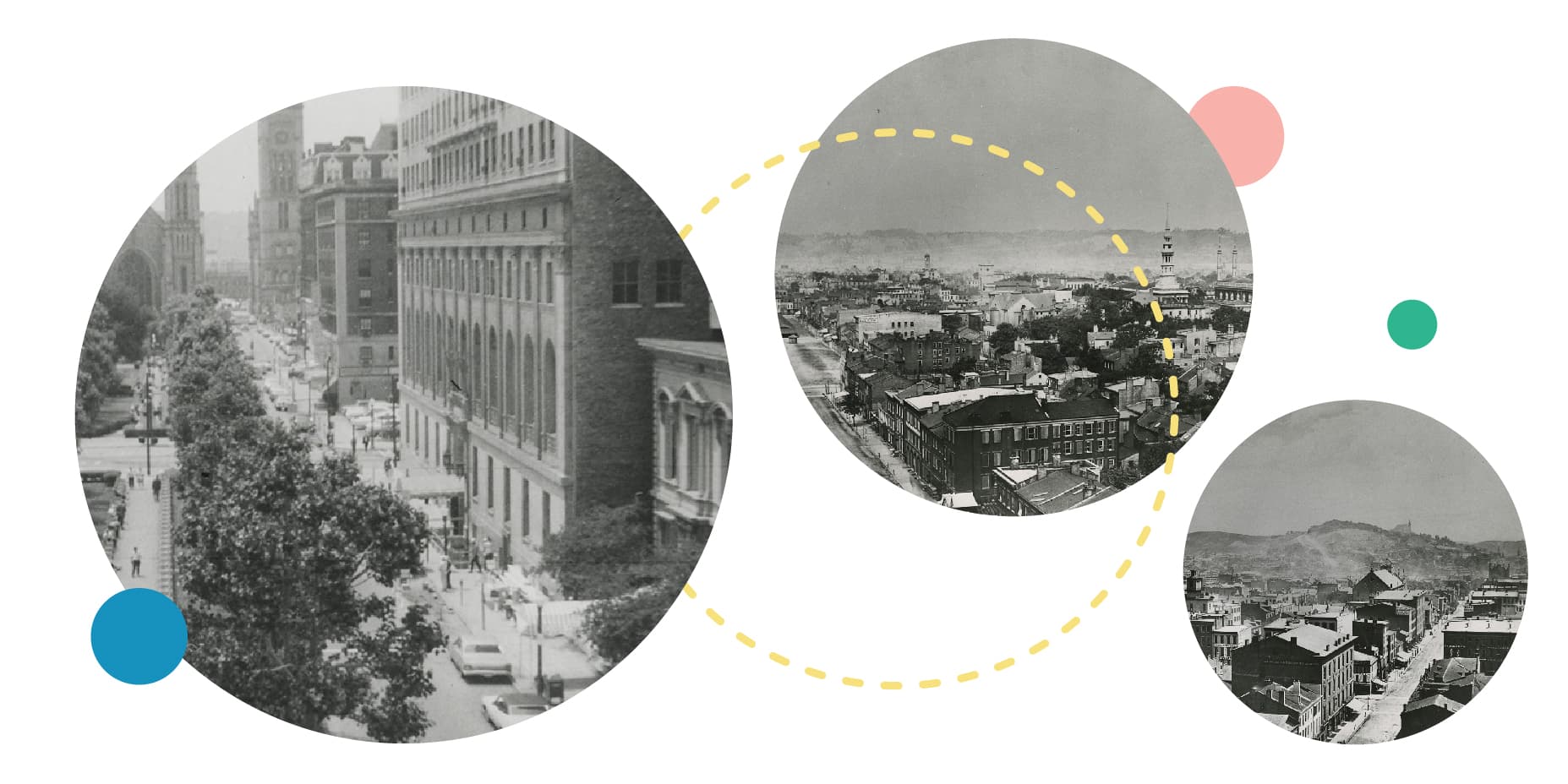 Taken from a rooftop in Newport, Ky., Fontayne and Porter’s Panorama of 1848, opens a new window provides us with our earliest view of Cincinnati. The city stretches out across each frame, drawing the viewer ever closer, revealing the minute details of a forgotten world. While Charles Fontayne and William S. Porter captured spectacular views of Cincinnati’s cityscape from afar, photographer John Wildman Winder provides a different vantage point from the center of a burgeoning 19th-century metropolis.

Born in Chillicothe, Ohio, in 1828, Winder was an active daguerreotype artist and photographer in Cincinnati between 1855 and 1873. He operated Winder’s Great Western Ambrotype and Melainotype Gallery and later the J.W. Winder & Co. Photographers National Art Palace on Fourth Street.

When, in 1866, Winder carried his camera to the top of Mozart Hall to takes this series of photographs, Cincinnati was the eighth largest city in the country. It had been 18 years since Fontayne and Porter had taken their famed panoramic images, opens a new window, and the city’s population had nearly doubled in that time.

It was from the rooftop of the Catholic Institute that the panoramic images, opens a new window were taken. Mozart Hall occupied the fourth floor of the building, which was located on Vine and Longworth streets, next to the Mechanic's Institute, opens a new window, which stood on the corner of Sixth and Vine streets. Today, Huntington Bank and Batsakes Hat shop are located on this corner. The Catholic Church sold the building in 1873, and the following year it was extensively rebuilt and renamed the Grand Opera House, opens a new window. Winder took 10 images on the roof that day. High quality prints of four of them are in CHPL’s collections.

View to the Southeast 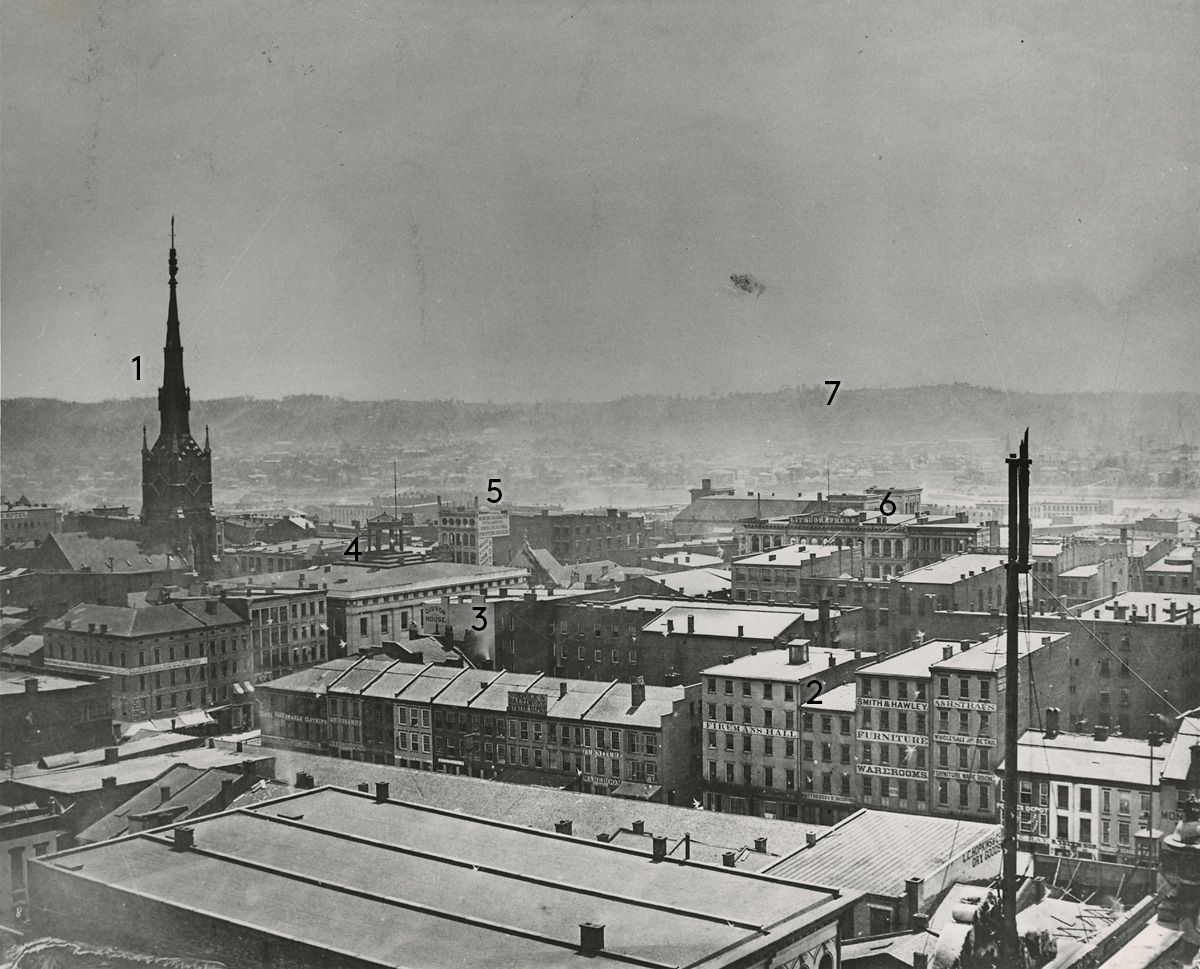 The large steeple to the left is the First Presbyterian Church, opens a new window (1), which stood on 4th Street near Main Street. The rows of buildings at the foreground are on the south side of 5th Street, where Fountain Square and the Westin Hotel stand today. The Fireman’s Hall sign (2) stands as the most prominent. Many of these businesses advertise furniture, bedding and fashionable clothing.

The Gibson House Hotel, opens a new window (3) is visible behind them, and was located on Walnut Street between Fourth and Fifth streets. Across Walnut Street from the Gibson House lies the Cincinnati College Building (4), which housed a lecture hall known as College Hall. The Art School of the Cincinnati Museum Association and the Law Department of Cincinnati College both operated out of this building in 1866. The College Building also was the first proper home of the Young Men’s Mercantile Library, that in turn provided space for the Cincinnati Chamber of Commerce.

The unusual building with the circular windows above the College Building is the Moore, Wilstach, and Baldwin Publishers, Booksellers and Stationers, opens a new window (5), located at 25 W. Fourth Street. The sign for Ehrgott & Forbriger Lithographers, opens a new window (6) can be clearly seen to the center right of this image, and was located at the southwest corner of Fourth and Walnut streets. The city of Covington (7) is visible in the distance.

View to the East 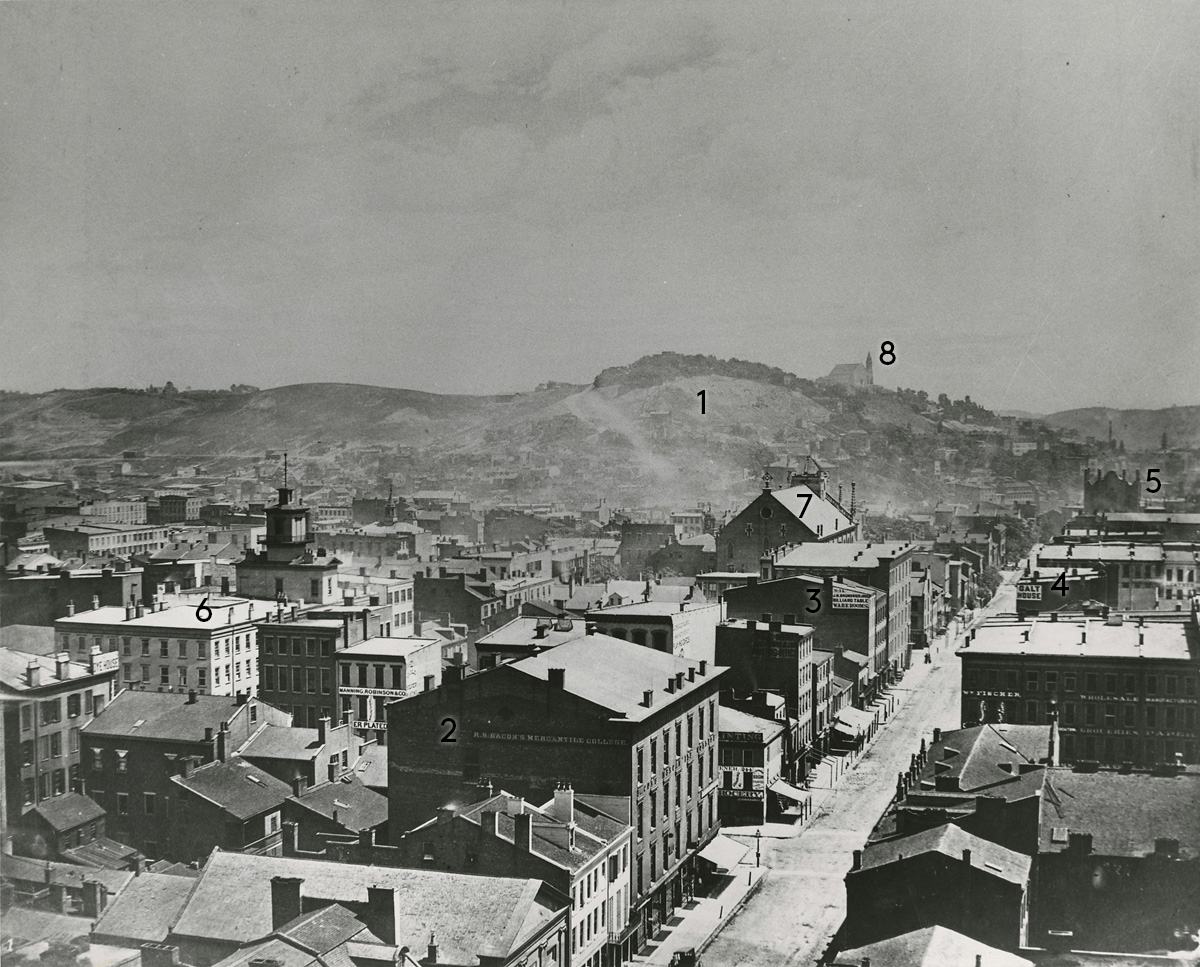 Peering down Sixth Street, looking east towards Mt. Adams (1), the large building in the lower foreground is Bacon's Mercantile College, opens a new window (2), which stood on the northwest corner of Sixth and Walnut streets and is currently home of the Contemporary Arts Center. The J.M Brunswick and Bros. Billiard Table Warerooms (3) can be seen further down Sixth Street. The mayor’s office was located across the street from this near the Galt House Hotel (4), which stood on southwest corner of Sixth and Main streets. The area was densely packed with wholesalers, soap makers, carriage makers, saloons, dwellings, schools, and churches. “Perhaps no part of our city has been more notorious during the past three years, than the south side of Sixth Street between Walnut and Main” according to a contemporary book exposing the “horrors of the Queen city.”, opens a new window

Beyond the Galt House lies the distinctive silhouette of the Bene Israel Synagogue (5) on 538 Broadway Street. Built in 1853 by Cincinnati’s first Jewish congregation, in 1870 it became home to the African Methodist Episcopal Church and was known as the Allen Temple, opens a new window. It was demolished in 1979 for an expansion of Procter & Gamble.

To the left of Bacon’s Mercantile College is a large white building with a square tower on top. This is the Walnut Street House Hotel (6), which was built around 1850. In the center of the photo, on Sycamore Street, stands St. Xavier Church, opens a new window (7), only six years old in 1866. Designed by local architect Louis Picket, the church would be gutted by fire in 1882. The original steeple collapsed in the blaze, and the clock tower remaining today was designed by Samuel Hannaford. St Xavier’s college buildings are visible to the left of the church.

Beyond St. Xavier lies the neighborhood known as Bucktown, which was home to a large percentage of Cincinnati’s African American population. In the hazy distance, houses can be seen creeping up the treeless slopes of Mt. Adams. The hills are so barren that it is difficult to picture them as the future home to Eden Park and the Cincinnati Art Museum. Immaculata Church, opens a new window (8), built in 1859, is the only recognizable landmark on Mt. Adams.

View to the North 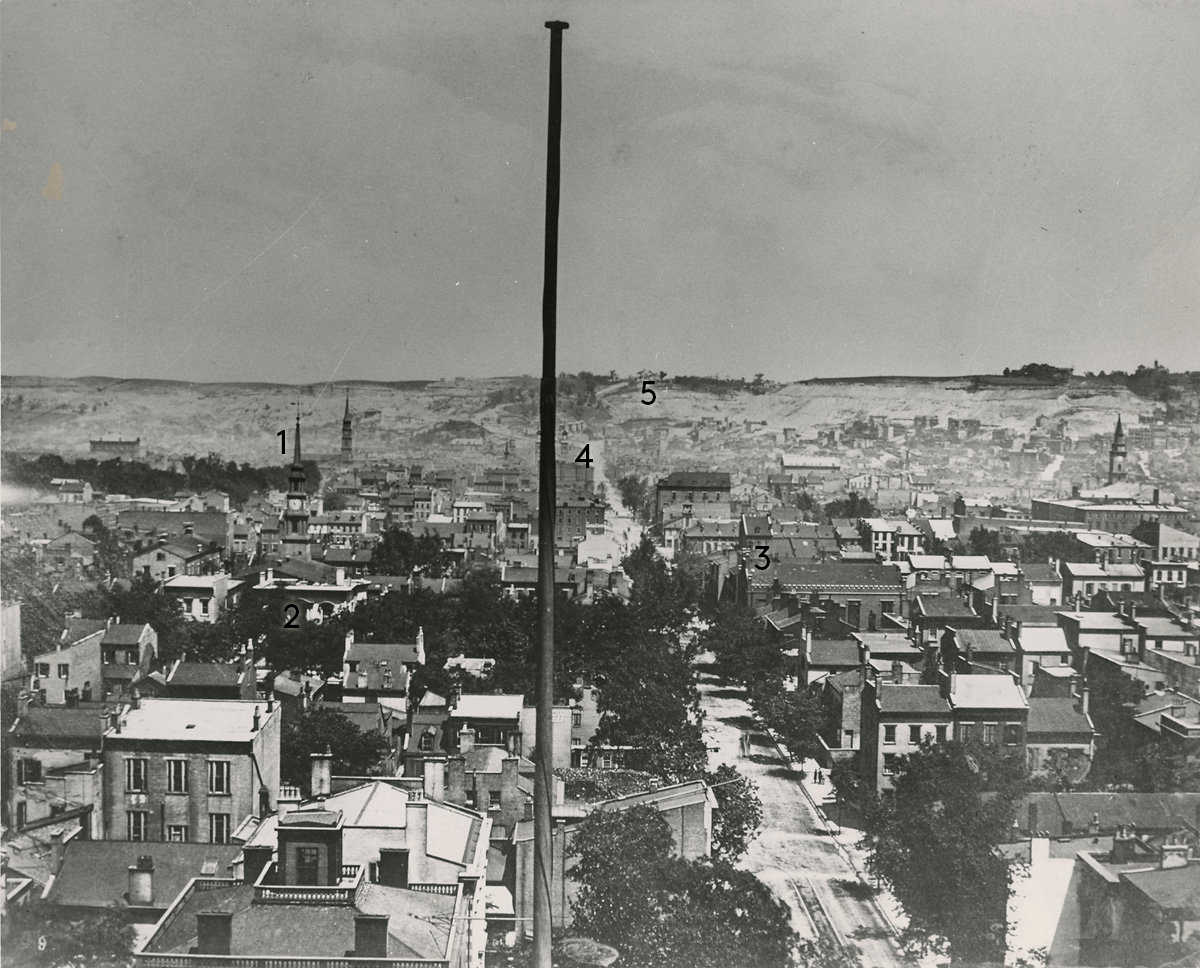 The view looking north up Vine Street reveals many fine residences and churches. The prominent church steeple to the left of the flag pole is the Ninth Street Baptist Church (1), which stood on Ninth Street between Vine and Race streets, a site currently occupied by the Garfield Garage. Directly below the distinctive clock tower can be seen the top story and roofline of the Fechheimer Mansion (2) on Garfield Place. Built in 1861, this building is thought to be the oldest surviving residence designed by Samuel Hannaford. It was sold to the Cuvier Press Club in 1938, and today serves as headquarters for the brand design firm LPK.

The church with no steeple, to the right side of the flagpole, is the Vine Street Congregational Church, opens a new window (3). The Gayety Theater, opens a new window later stood on this site, which is now occupied by the South Building of the Downtown Main Library. Three blocks north of this church, Vine Street crosses the Miami and Erie Canal, beyond which the twin steeples of St. Francis Seraph Church (4) can be seen. In the distance, Vine Street winds its way up the hillside (5).

View to the West 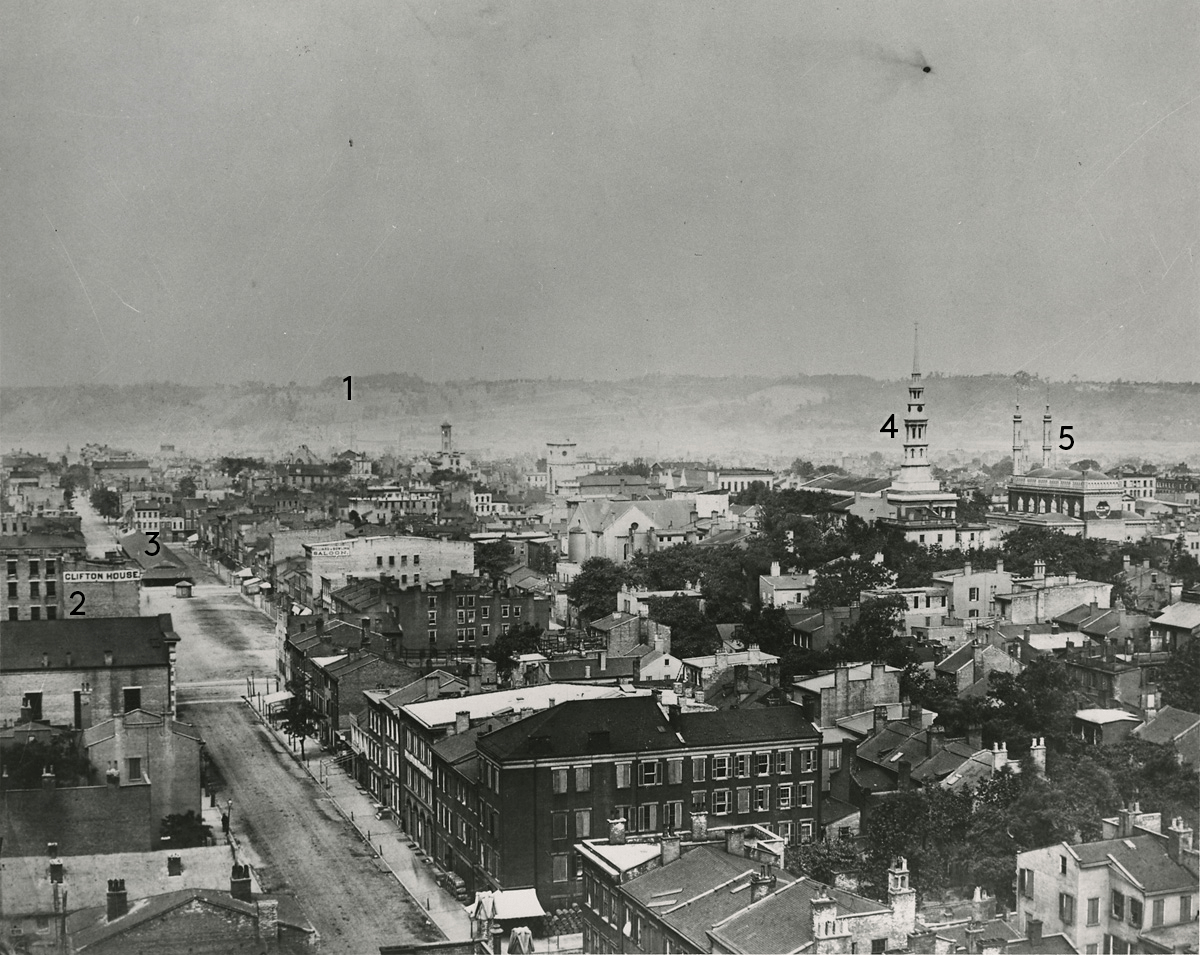 Another view down Sixth Street, this time to the west. The western part of the city was leafy and residential, and had many fine homes and churches. Price Hill (1), which was annexed to the city in 1870, is visible in the distance. Looking clockwise from the top left of this image you can see the Clifton House Hotel (2), located on the southwest corner of Sixth and Elm streets. The Clifton House became the Heyl House in 1870, and was purchased by the Young Men’s Christian Association, also known as the YMCA, in 1874. The original Sixth Street Market, opens a new window (3) house is visible just beyond the hotel. In 1890, a large flower market would be built beside this one. The entire market was demolished in 1960. Further to the right you can see the steeple of St. Peter in Chains Cathedral (4). This Greek Revival cathedral was dedicated in 1845, and was only 11 years old at the time of this photograph. Its 221-foot-high white limestone spire was the tallest structure in the city. Directly across Plum Street lies the newly constructed Plum Street Temple (5) (now Isaac M. Wise Temple), which was dedicated, opens a new window on Aug. 24, 1866.

Follow in the footsteps of our Genealogy & Local History Department in their journey back in time through Winder’s Panorama. Make new discoveries with resources used to inform this month’s Throwback Thursday post: