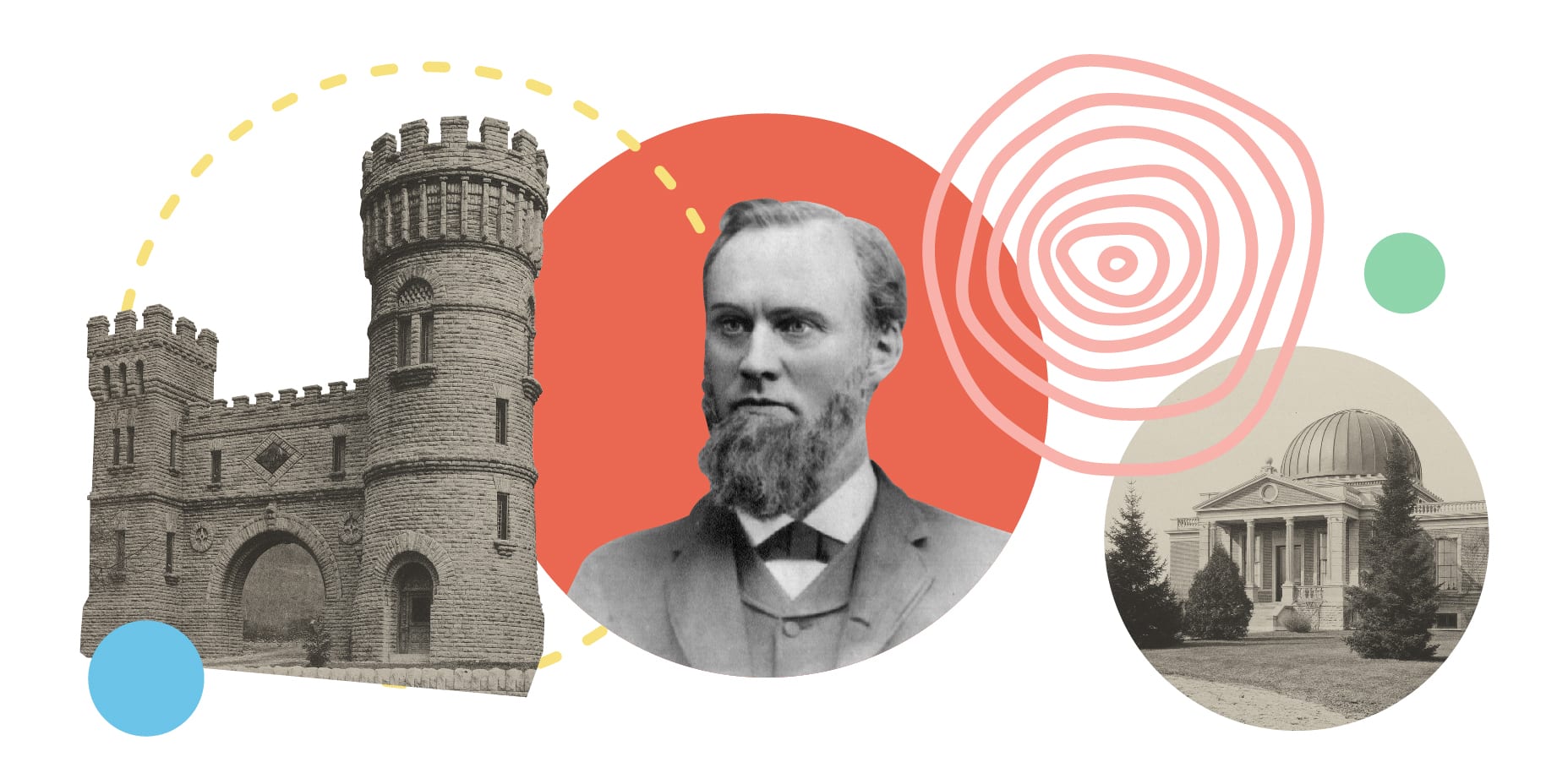 One of the things Cincinnati is known for is its rich and distinctive architecture. One of the architects responsible for this bounty is Samuel Hannaford.

It seemed that Samuel Hannaford would pursue an education in agriculture, thus continuing the family farm business. However, a clash between young Samuel and his father led his life in a different direction. After leaving home at 17, Hannaford took an apprenticeship with architect John Hamilton. Over the next three years, he studied the basics and intricacies of architecture. In 1854, Hannaford started his own architecture firm, but after struggling to launch a successful business he was forced to join forces with architects William Tinsley and Edward Anderson. This partnership provided steady work and opportunity for bigger projects, such as the Cincinnati Workhouse. Designed by Hannaford and Anderson, Cincinnati’s Workhouse was designed for the rehabilitation of prisoners who committed lesser crimes. The workhouse operated from 1870 to its closing in 1985. The building was demolished in 1991.

Other known works would come out of this partnership, such as the Marcus Fechheimer mansion which is now known as the Cuvier Press Building, The Hayes-Cookhouse in Greendale, Ind., the Westwood School, and Samuel Hannaford’s own residence which is still standing on the corner of Winton Road and Derby Avenue.

After three months of traveling Europe studying architecture, Hannaford returned to Cincinnati with renewed motivation and inspiration. He was particularly drawn to the Gothic and Romanesque styles of architecture in Europe. With this momentum and inspiration, Hannaford once again created his own architecture firm that produced several successful projects such as St. George Church, the Cincinnati Observatory, and the University of Cincinnati’s McMicken Hall.

Unfortunately, though his career was successful tragedy struck his personal life. In 1871, his first wife, Phoebe, died of typhoid fever. His second wife, Anna Belle, would also succumb to a similar fate of dying young, leaving Hannaford to juggle his prolific career and raise his children.

However, these tragedies did not derail Hannaford, and in 1874 he entered a partnership with Edwin Proctor. The most iconic building that came from this partnership was Music Hall. Completed in 1878, this project solely made Hannaford a renowned figure in the world of architecture.

During the years 1878-1887, Hannaford’s career took off with his newfound notoriety. He designed many buildings in the Tristate area including the new post office and the custom house’s buildings in downtown Cincinnati.

This fame also caught the attention of some of the city’s most rich and powerful citizens, such as the Emery family. The family owned real estate in downtown Cincinnati and the surrounding neighborhoods. They hired Hannaford to design several buildings, from apartments to hotels, as well as significant projects in Walnut Hills and Covington.

Because of the growing workload these successful partnerships produced, his sons Harvey and Charles joined him in creating the Hannaford and Sons architecture firm in 1887. One of the first major projects Hannaford and Sons commissioned was the new City Hall. Construction started in 1887 and was completed in 1893. The new City Hall launched Hannaford’s status as the best architect in the city and most prolific nationwide. Some of the other notable projects worth mentioning designed by Hannaford and Sons are Elsinore Castle, Eden Park Water Tower, the Ohio National Guard Armory, and the Phoenix Club.

Samuel Hannaford and his multiple partnerships designed over 300 buildings in West Virginia, Tennessee, and the Tristate area. Even after his retirement in 1904 he stayed active in the community by writing for The Western Architect & Builder and taught classes at the Ohio Mechanical Institute.

After his death in 1911, Hannaford & Sons continued designing buildings until the firm eventually dissolved in the 1960s. Samuel Hannaford was buried in Spring Grove Cemetery, where he also designed the Norman Chapel. He has no headstone because he wished for his buildings to be his lasting legacy.

To learn more about Samuel Hannaford and to view his Cincinnati architectural designs, visit the Digital Library.

Hall, C. G. & Cincinnati & Hamilton County Public Library. (1902). The Cincinnati Southern Railway: A History. A Complete and Concise History of the Events Attending the Building and Operation of the Road. McDonald Press.