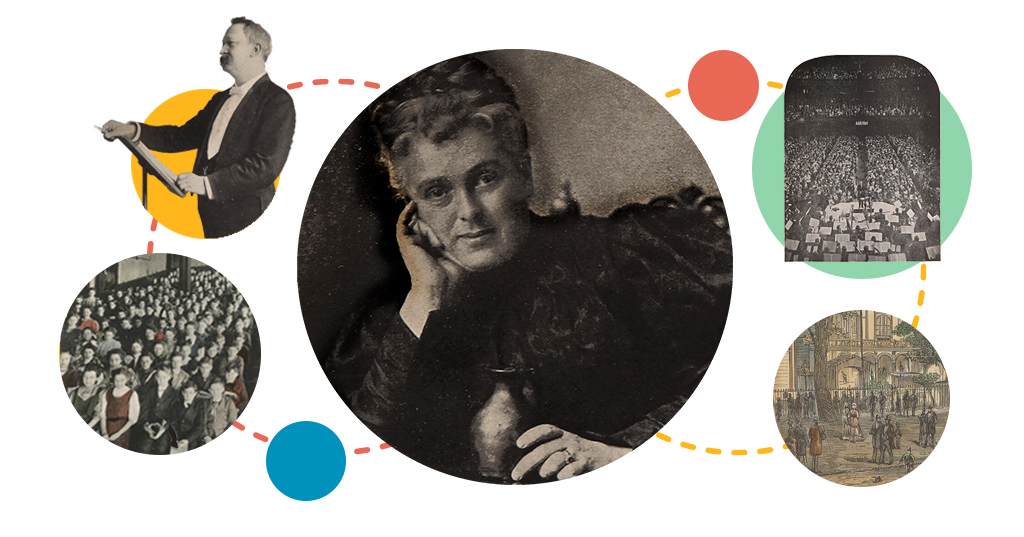 The Cincinnati May Festival, opens a new window has a long-standing tradition of celebrating orchestral and choral music talent from all over the world.

Singing societies and festivals have been popular as forms of entertainment for centuries. Originating from the German word Sängerfest, meaning singer festival, these European festivals traditionally host a large parade followed by other celebratory events. It is no surprise that Cincinnati with its strong German roots swiftly adopted this tradition.

Origins of the May Festival

In 1873 Maria Longworth, granddaughter of Nicholas Longworth, traveled to England and attended a large choral festival. This inspired her to bring the tradition back to Cincinnati. Already being a member of the local choral scene, Longworth, along with her husband George Nichols, approached Theodore Thomas to direct an annual chorus festival that would later be known as the May Festival. 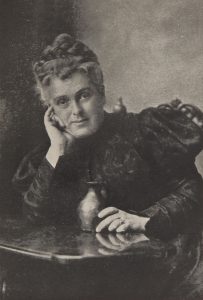 Theodore Thomas was born in Esens, Germany in 1835. Interested in violin from a very young age, by age 10 he was the primary source of income for his family. In 1845, his family emigrated to the United States seeking a better life and more opportunities. Along with being a talented violinist, he would later become a conductor and orchestrator. Thomas is considered the first celebrated American orchestral conductor. His work with the Cincinnati May Festival propelled his career forward and he founded and directed the Chicago Symphony Orchestra. 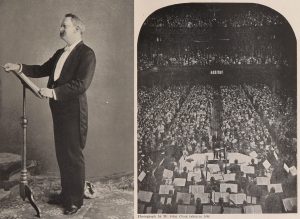 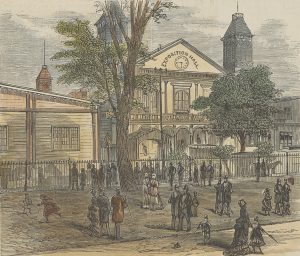 With bad weather in the forecast, the May Festival of 1875 featured the American premieres of Bach’s Magnificent and Brahm’s Triumphlied. However, the weather proved to be more cumbersome than people anticipated. The roof of the Exposition Hall (also known as Sängerfest Hall) was tin and as the rain began to fall, the sound of the rain on the roof was deafening. The roof also leaked and between the leaks and the sound of rain, it brought the performance to a halt. In addition to the bad weather, it was seasonably hot and the building was beyond capacity with spectators. People spilled out in the streets to get some relief from the oppressive heat and it was reported that people also busted out windows to create airflow. This experience inspired Reuben Springer to fund a more permanent structure for Cincinnati. That permanent structure became Music Hall. 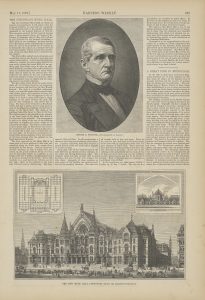 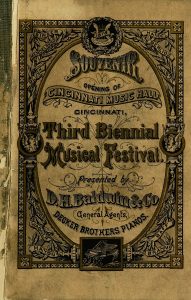 The original festivals in 1873 and 1875 featured teacher and student choirs, but after the 1875 festival the presence of school choruses was slim to none. In 1882, student choral ensembles began to become a regular part of the May Festival. By 1897, music was more incorporated into the regular curriculum of Cincinnati Schools. Over 2,000 students from city schools participated in the Children’s May Festival in 1897. 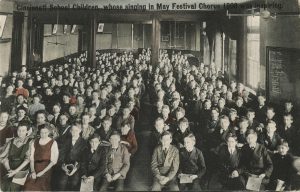 Noteworthy Performances Evolution of the May Festival

To see more about the May Festival including official programs, visit our Digital Library.

Chorus music of the Cincinnati May Festival:

Souvenir from the opening of the Cincinnati Music Hall:

Souvenir from the opening of the Cincinnati Music Hall and the third biennial musical festival May 1878. (1878). D.H. Baldwin Company.