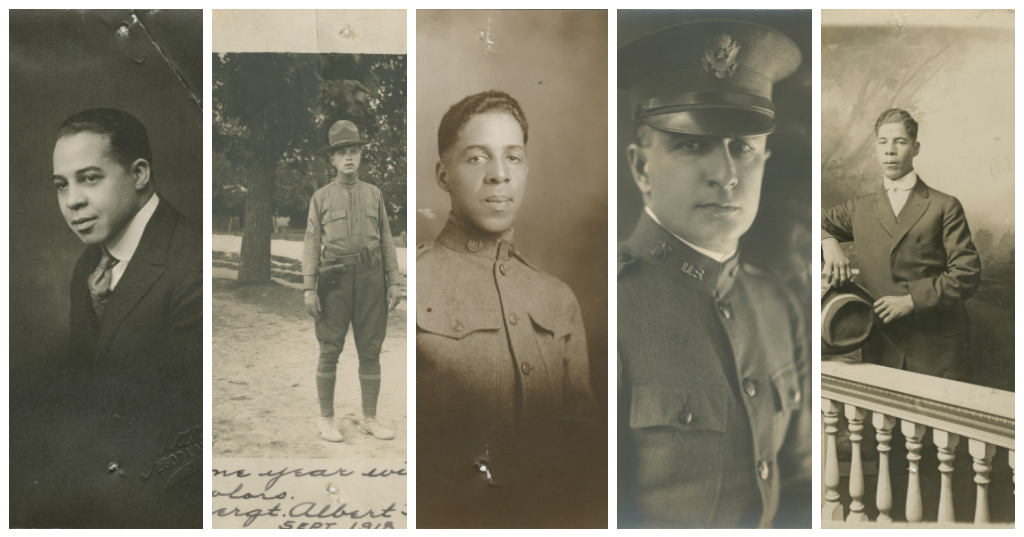 Until We Meet Again: Cincinnati Portraits from World War I is an exhibition of select original photographs from Museum Center’s World War I Servicemen Portrait Collection, 1917-1919 and artifacts such as posters, ephemera, and uniforms. The exhibition runs from June 28 to September 29, 2019, and is located in the Ruthven Community Gallery which is free and open to the public.

This collection of World War I-era portraits originated as part of the US and Allied Governments Victory War Exposition held at Music Hall. The exposition opened on December 14, 1918, and lasted nine days. 164,000 visitors from the Cincinnati area and beyond came to see not only the traveling exhibit of weapons, planes, and mock battles, but also approximately 6,000 portraits of local people who served in the US Armed Forces. 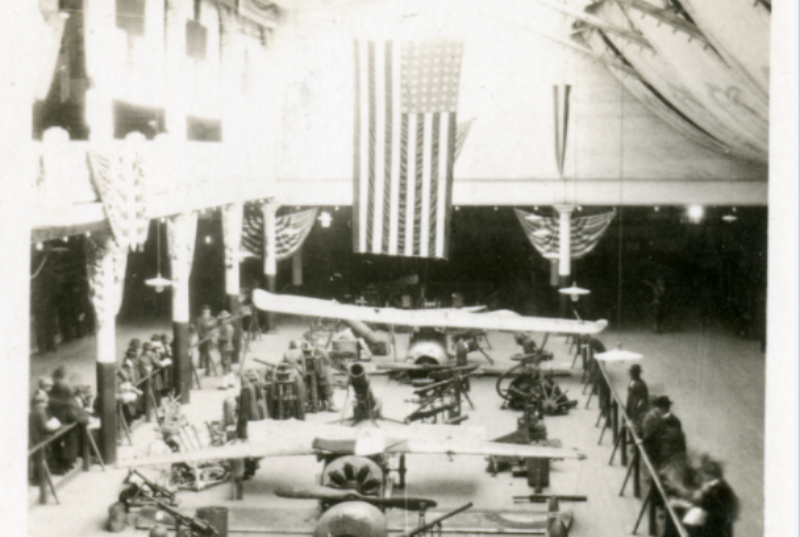 The local committee solicited the loan of photographs from the families of Cincinnati area service members to be used in a special added display.

A quote from the Cincinnati Enquirer’s December 7, 1918 edition gives us a good sense of the importance of the portraits on display: “It is expected that the pictures of Cincinnatians in service will make one of the most inspiring exhibitions of its kind ever shown in the United States. The collection will be almost 100 percent in exhibiting the entire of Cincinnatians in uniform.”
(Cincinnati Enquirer (1872-1922), Dec 10, 7)

These portraits formed a near-complete record of people from the Cincinnati area who served during World War I and was one of the most poignant features of the event. After the exposition closed the photographs were returned to the lenders with a form letter from Edwin E. Meyers, Executive Secretary, asking the lender to donate a copy to the Historical and Philosophical Society of Ohio (HSPO). About half of the service members’ families agreed to donate copies of photographs to the (HSPO) now the Cincinnati History Library and Archives located in Union Terminal. 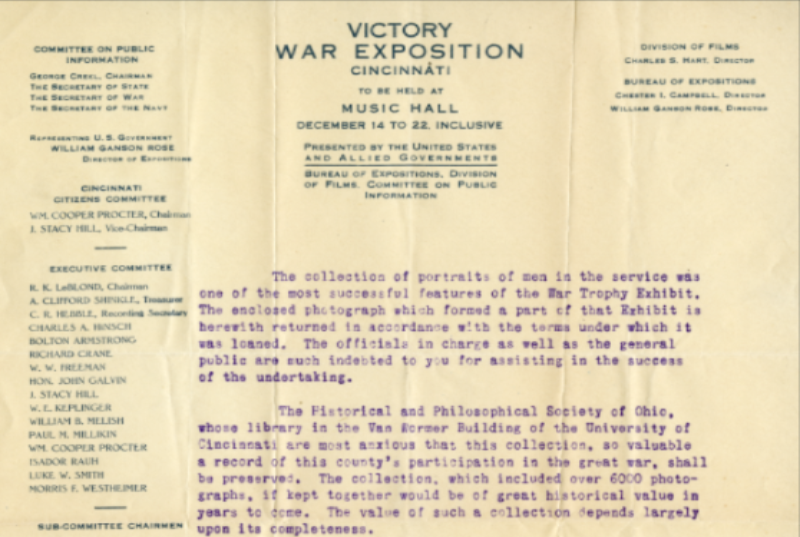 The idea of the Until We Meet Again exhibition came about because this year marks the 100th anniversary of the HSPO receiving donations of the photographs. This year is also the 100th anniversary of the signing of the Treaty of Versailles. It pays tribute to the men and women who served the United States when called upon to defeat the Central Powers.

The exhibit will highlight stories of those that served and gave their lives in service to their country. For example, Sergeant Albert B. Flatau, who served in the Ordnance Department in France, writes in a photographic postcard dated Sept. 10, 1918 to his grandmother: Dear Grandma: Guess you are home by now after having a bully good time in Detroit. Have been away from home a year now. In a few days will spend my furlough in Bordeaux expect to have a fine time. Am feeling great. Hope all are OK at 3619. Much love to all, As ever, Your Grandson Albert. 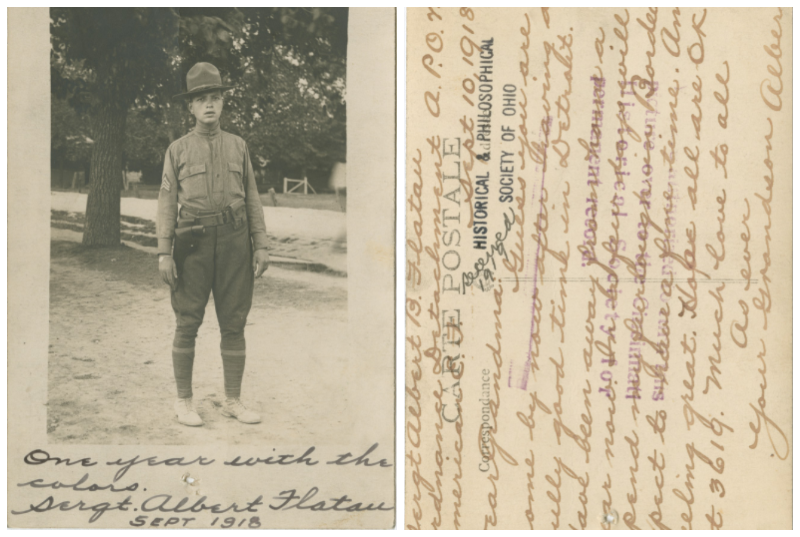 The exhibition also commemorates those that gave their lives in service to their country and have been honored by receiving the Gold Star. When a loved one was in service, the family would hang a flag with a blue star for every family member in service in their window as a way to honor them. When a family member died in service, a Gold Star was stitched over the blue star. From this collection of 2,625 service members, there are 150 that are Gold Star members. Their names will be listed on a wall in the gallery. We will highlight seven individual service members and their stories through letters from their family as well as their record in The Public Library of Cincinnati and Hamilton County’s Gold Star Record.

Captain George H. Kirker is one of the Gold Star members we highlight. Kirker was a Field Auditor at the St. Paul Aviation School died of Pneumonia following Influenza at St Paul, Minnesota.

His mother, Ella H. Kirker writes in a letter on display: He was born and raised in Cin. and buried here. it [SIC] has always been our home although my son was employed for a short while at Evansville. Transferred from here also at Fords Detroit then Field Auditor at Camp Upton L. Island for the Government also at Washington. he was my only son, and we miss him so much. he was so good and kind to us. in perfect health, young and strong, had taken his fathers [SIC] place in the home since his Fathers [SIC] death several years ago. God gave him to us to love but Oh he has taken him from us and hope we shall meet him soon. Respectfully, His mother, Ella H. Kirker, 2940 Gilbert Ave, Cincinnati, Ohio. 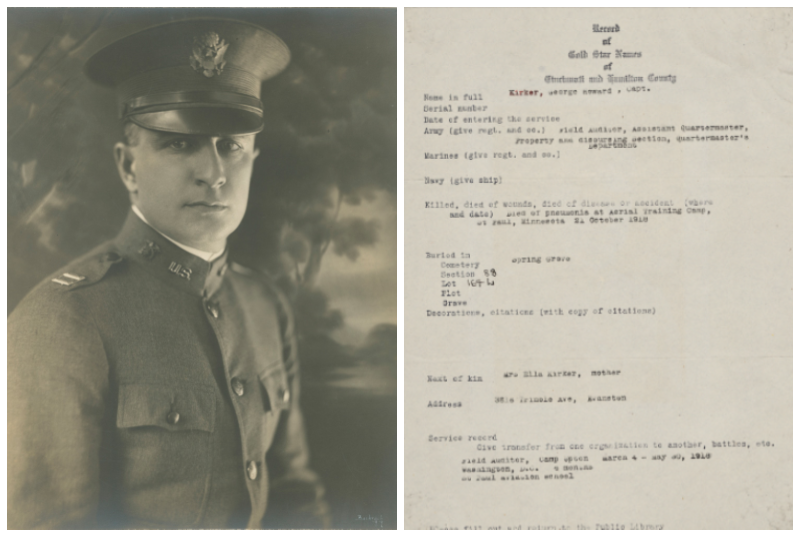 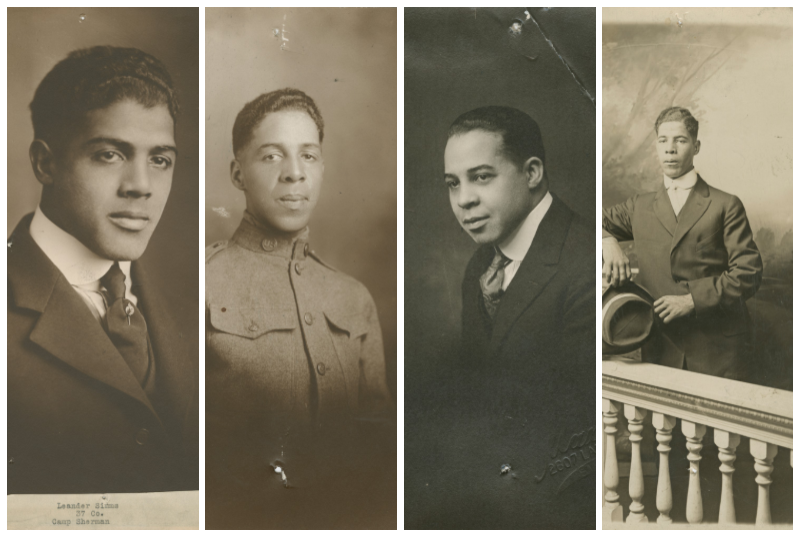 According to Chad Williams of Hamilton College, writing for the New York Public Library's Africana Age: African & African Diaspora Transformation in the 20th Century, opens a new window, "World War I was a transformative moment in African-American history. What began as a seemingly distant European conflict soon became an event with revolutionary implications for the social, economic, and political future of black people. The war directly impacted all African Americans[...]. Migration, military service, racial violence, and political protest combined to make the war years one of the most dynamic periods of the African-American experience."

For more information about the Cincinnatians who fought it WWI, visit the Library's Digital Archive here, opens a new window.

Please note that this exhibit no longer on display at the Cincinnati Museum Center.