<< Back to Special Collections home 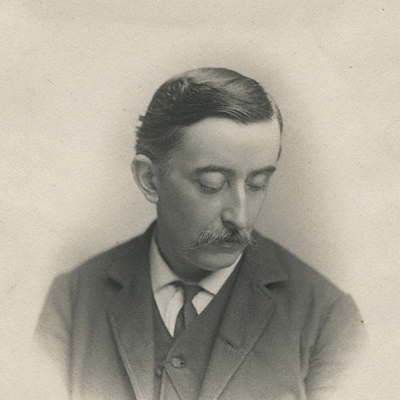 Lafcadio Hearn, the noted journalist, author, educator, translator, and interpreter of Japanese life and culture was closely associated with Cincinnati for a number of years. During the years that he lived here (1869-1877), he contributed hundreds of articles about the city for the Cincinnati Enquirer and the Cincinnati Commercial. While in Ohio, he also worked as a private secretary and translator for Thomas Vickers, the Librarian of the Public Library of Cincinnati and Hamilton County. (Hearn once wrote that he “wandered the streets and nourished his dreams in the public library.”) In the 1950’s, Vickers’ personal collection of Hearniana was donated to the Library. Over the years, other Cincinnati residents contributed Hearn first editions to the Library. Today, our collection contains more than 600 volumes by and about Lafcadio Hearn in English, Japanese, and many European languages. We also own the only known complete set of Ye Giglampz: A Weekly Illustrated Journal Devoted to Art, Literature and Satire, Hearn’s short-lived literary journal, which was a collaborative effort with the Cincinnati artist Henry Farny.

Notable titles in the collection include:

The Lafcadio Hearn Collection is housed in the Downtown Main Library’s Cincinnati Room. If you’d like to browse through some of the material in the collection, just stop by the Cincinnati Room service desk—our staff will be happy to assist you!

Considered one of modern America’s leading prose impressionists, Lafcadio Hearn produced a large body of work that is more closely related to nineteenth-century European than American literature. His sketches, short stories, and novellas demonstrate a vision of evil and the supernatural reminiscent of Edgar Allan Poe and Charles Baudelaire. Hearn is also recognized as a perceptive literary critic whose readings and theories reflect his devotion to the beautiful and bizarre.—Contemporary Authors Online

Lafcadio Hearn came to Cincinnati from Europe. He was born in 1850 in the Ionian Islands of a Greek mother and Irish father, raised in Ireland by a great-aunt, and then sent to the United States at age nineteen. An impoverished Hearn arrived in Ohio in 1869. He lived by the skin of his teeth until he was taken in by an English printer, Henry Watkin, who let him sleep on the hay in the back room. Encouraged by Watkin, Hearn eventually embarked on a journalistic career that in later years took him to New Orleans, the West Indies, and eventually, Japan.

Hearn arrived in Japan in 1890. He married a Japanese woman of samurai descent, with whom he had four children. In 1896 he became a Japanese citizen, taking the name Koizumi Yakumo. He died in 1904, after having spent fourteen years in his newly adopted country, and producing a dozen books which interpreted Japan and its civilization to Western readers. Generations of Japanese school children have grown up learning both English and their society’s pre-Western lifestyle through reading Hearn’s interpretations of Japanese folk stories, mythology, and daily life in turn-of-the-century Japan.

In the 1870’s Hearn established a reputation as a crime reporter for the Cincinnati Enquirer and the Commercial. His speciality was the lurid underbelly of the city—in the introduction to the reprint of Ye Giglampz, Jon Christopher Hughes comments, “His best stories described the misfits, the outcasts, those on and over the fringe of society…Hearn pursued ghastly crimes, questionable professional practices, and injustices with lust and there was plenty for him to write about in the disorderly city.” Here are some of the colorful headlines attributed to Hearn:

If you’re interested in reading Hearn’s contributions to local newspapers, contact our Information and Reference Department, opens a new window for assistance. Nineteenth century issues of The Enquirer and Commercial are shelved in the department’s archives.