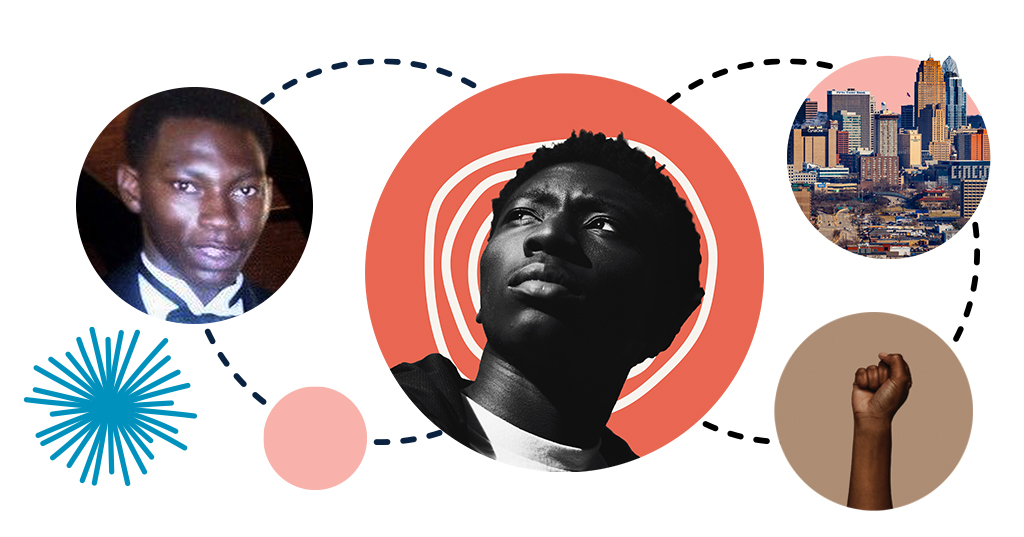 Timothy Thomas, 19, had two homes. One in Golf Manor with his mother, Angela Leisure, and one in Over-The-Rhine, with Monique Cox, mother of his 5-month-old son, Tywon Thomas. On April 7, 2001, around midnight in the Cincinnati neighborhood Over-The-Rhine, Thomas left the apartment to buy some cigarettes. He never returned.

On that same early morning, two off-duty Cincinnati police officers spotted Thomas coming out of The Warehouse, a local nightclub. One of the police officers recognized the young man from traffic stops and called this in to dispatch. Dispatch then announced, “Ah, we have a suspect, male, Black about 6 feet, red bandanna, last seen eastbound on 13th. He has, ah, about 14 warrants on him.” At the time, Thomas had warrants for nonviolent charges, most of them for traffic stops. This fact was left out of the call.

Thomas’ death added to the 15 Black men killed by Cincinnati police officers between 1995 and 2001. Five Black men died in the custody of the Cincinnati police officers between October 2000 and April 2001. In one of the most high-profile of these cases, Roger Owensby Jr. was placed in a chokehold, maced, and allegedly beaten while in police custody. He later died. Owensby had been mistaken for a drug dealer. Owensby was a father and an honorably discharged sergeant in the United States Army and had no police record. Officers were tried and acquitted. Frustrated, the families of these young black men filed a federal lawsuit against the Cincinnati Police Department.

By Saturday, April 8, the newspapers were featuring the shooting and the term “excessive force” was thrown about. With African Americans in Cincinnati already upset by the deaths of 15 Black men at the hands of police officers, add to that the trial of the Cincinnati police officers that resulted in acquittal and the death of unarmed Timothy Thomas at the hands of Cincinnati police officer Stephen Roach, and a tinderbox filled with frustration, disenfranchisement, inequitable housing and ongoing racism was lit and protesters burst upon the scene demanding change.

On Monday, April 9, Thomas’ mother and about 200 protesters marched to City Hall interrupting a meeting of the City Council’s Law and Public Safety Committee, to demand answers. Included in the protesters was one of the leaders of the Black United Front, the Rev. Damon Lynch III, who demanded that council members stay until the protesters were given explanations and answers to their questions regarding Thomas’ shooting. Cincinnati Police Chief, Thomas Streicher, informed the crowd that he could not comment on an ongoing investigation. As protesters became louder and began to push forward, trapping the council members in place, Chief Streicher revealed the fact that Timothy Thomas had been unarmed. With this revelation, the crowd began to disperse.

Protesters fanned out and a crowd chanting “No justice, no peace” and “Stop the violence” gathered in front of District One in Over-the-Rhine to vocalize their displeasure at the death of unarmed Timothy Thomas. Frustrated protesters threw cans and rocks at police officers wearing riot gear standing outside of District One. When protesters noticed that the officers were hesitant to use force, they pushed their way into District One. When protestors turned the District One flag upside down, Cincinnati police officers began pelting the crowd with bean bags and rubber bullets, and spraying them with tear gas. At the end of the night, 10 protestors were arrested.

The protests continued on Tuesday, April 10, and became more violent than the day before. A group of about 150, comprised of both Black and white protestors, splintered from the standing protestors and took the protests to the streets. Trash cans were thrown, windows of local businesses were broken, and mailboxes were ripped off. Findlay Market, a fresh open-air market in Over-the-Rhine, was set on fire by protestors. At intersections, protesters threw garbage at police officers. The protests escalated to looting and vandalism. Businesses were robbed and some white citizens were pulled from their cars and beaten. Protests moved into more neighborhoods as did the violence. Norma Hope Davis, president of the NAACP Cincinnati Chapters, was quoted as saying, “We’re trying to help express community outrage and make sure this doesn’t happen again.”

Protests continued into Wednesday, April 11, though with less violence in the daytime. Store owners began picking up the pieces. Many opened their doors to customers. It wasn’t until evening that violent protesters came out. Because the violence was so extensive, businesses stayed closed the next day.

Mayor Charlie Luken responded to the riots by declaring a state of emergency and ordering a four-day curfew. Mayor Luken commiserated with the protesters saying, “There’s a great deal of frustration within the community, which is understandable. We’ve had way too many deaths in our community at the hands of Cincinnati police officers… I’m not asking anyone not to be frustrated but to just realize in the short-term someone could get hurt.”

The protests continued at Timothy Thomas’ funeral. Standing in place and holding up the Black Power sign, the protesters’ message was made clear: Things needed to change. Around 1,000 people attended the funeral at New Prospect Baptist Church to show their support. Amond them was Martin Luther King III and NAACP President and CEO Kweisi Mfume. Black Panthers conveyed Thomas’ casket out of the church.

After the four-day curfew was put in place, the violent protests began to subside. But that was not the end of the situation. According to Scotty Johnson, president of the Sentinels, a fraternal organization of African American police officers, “I think what happened here…was a long time coming. The city council and administration had forewarning for years about the bad climate between Cincinnati police officers and the Black community, but nobody paid attention. Now I think the message has been sent that we need to quit playing games with police officers-community relations and do some concrete things to bring our city back together.”

The Rev Damon Lynch III was quoted as saying, “We still haven’t turned the corner toward real reconciliation, healing, or justice. We have a system of economic apartheid at work in Cincinnati that becomes evident when you leave downtown and cross over Central Parkway. You essentially have two different cities.”

After Thomas’ death and the civil unrest, as a result of direct action from majority Black community members and activists, the Cincinnati Police and their union, the ACLU, Cincinnati Black United Front adapted The Collaborative Agreement. They agreed that the best approach was to take a “community focused approach toward policing.” The Collaborative Agreement. The way new recruits were trained, old policies were revamped, and there is now a specific process for handling police use of force and the investigation that will follow. Also, a federal monitor was asked to observe Cincinnati Police and encourage them to be in compliance with the changes for six years.

It’s been twenty years since Timothy Thomas was shot by Cincinnati Officer Roach. Has there been significant changes in overall police use of force throughout America? You can decide. Say their names.

Rayshard Brooks, 27, his crime- falling asleep in his car in a drive thru

Daniel Prude, 41, his crime- a mental health breakdown outside his home

George Floyd, 46, his crime-allegedly tried to use a counterfeit $20 bill

Breonna Taylor, 26, her crime-Asleep at home

Atatiana Jefferson, 28, her crime- Being at home

Aura Rosser, 40, her crime-being at home

Stephon Clark, 22, his crime- standing in his yard holding a cell phone

Tamir Rice, 12, his crime- Being a kid and playing with a toy gun in a park

Michael Brown, 18, his crime-walking with a friend

For more information check out these articles from our Library databases:

The Cincinnati Race Riots of 2001

Ferguson riots bring back painful memories of Cincinnati in 2001

Behind the death of Timothy Thomas

This Book Is Anti-racist