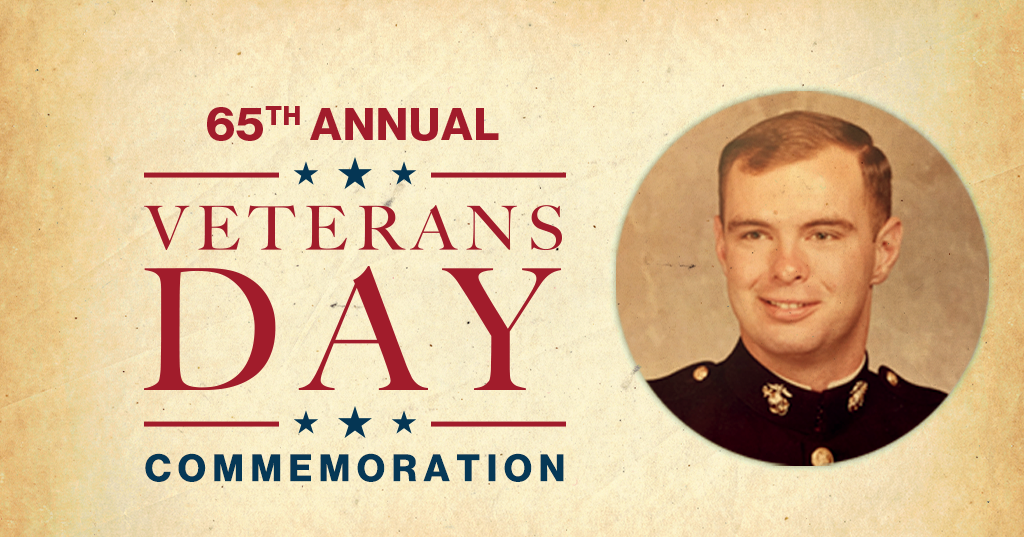 For the past 64 years, the Downtown Main Library’s Veterans Day commemoration has been a celebration of those who served and continue to serve in the armed forces. With patriotic music from the Cincinnati Symphony Orchestra, a social reception, and participation from local veterans across the county, it’s something the community looks forward to each November.

This year’s keynote speaker is Robert Hamilton. Bob, as he is known to many, was born in St. Petersburg, Florida but raised on the east side of Cleveland, Ohio. He graduated from University School in 1964 and attended Centre College in Danville, Kentucky graduating with a double major in history and government. He was also commissioned a 2nd lieutenant in the United States Marine Corps, embarking on his 26-year military career.

“My advisor at Centre College was Dr. Charles Lee. Dr. Lee had been a marine in the Korean War,” said Hamilton in his interview with the Veterans History Project. “He was wounded very severely and was told he would never walk again. He said he got up the first day and said he was going to feel sorry for himself and then decided that didn’t sound like any fun. He went back to the University of North Carolina and got his PhD. in history. I was fortunate enough to have him as my advisor and the man that he was is what encouraged me to go into the Marine Corps. He had every reason to be bitter at the Marine Corps and he wasn’t at all. He was very proud of his time in the Marine Corps and I just decided there must be something here. Plus, they’ve got the best looking uniforms.”

In August of 1968, Hamilton reported to flight school in Pensacola, Florida. He was awarded his wings of gold in October of 1969. From there, he transitioned to the AH-1G Cobra with the Army and was sent to Vietnam with Marine Light Helicopter Squadron 367 in August of 1970.

“We were there to provide close air support for the guys on the ground,” said Hamilton. “We landed in Da Nang and I got off the aircraft and there was Colonel Don Conroy. He was the head of the flight training when I was first checked into Pensacola. There was a movie made about him called The Great Santini, opens a new window. The book, opens a new window was written by his son. We got off the plane and he called us all by name.”

Hamilton was stationed in Vietnam from 1970-1971. “We had a series of missions that we would fly,” notes Hamilton. “Some of them would be pretty boring—we’d do a lot of re-supply. We did strike missions. We did missions with the recon units dropping six, seven-man teams out in the middle of nowhere. We flew medevac (evacuation of wounded soldiers) escort missions. Night medevac was always exciting. Any night flying was always exciting because there were no street signs or McDonald's down there to orient off of.” 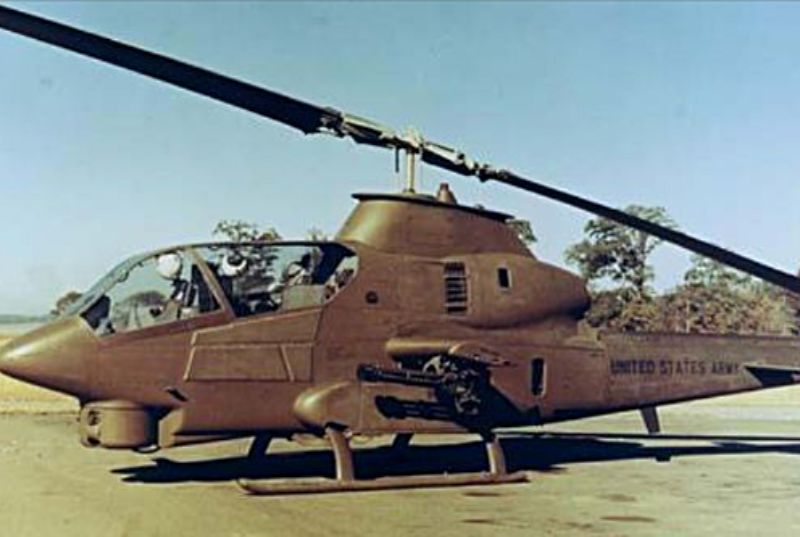 Hamilton was shot down once and was awarded two Distinguished Flying Crosses, 50 Air Medals, and the Navy Achievement Medal with Combat V.

“I was shot down on Thanksgiving of ’70 flying night medevac. I was co-pilot with Major Bob Sheehan and we got a call to go out. The weather was terrible. We flew from Marble Mountain Air Field south on Highway 1, which was the main highway up and down the coast of Vietnam. The reason we flew it [was because] there were vehicles that had headlights and we could kind of follow them to get where we were going. We wanted to get to Hill 55. We told [the unit on the ground to] pop a flare, and they did, so we headed up weaving in and out between the hills. We located them and we went into an orbit a little bit west of them. We didn’t want to orbit right over them because that would make them a target.”

The ceiling came down below the hilltops and Hamilton’s Cobra got trapped in the valley. The unit in distress continued to pop flares in an attempt to be helpful, but it only ended up disorienting Hamilton and his pilot. While they were deliberating if they could get the pickup helicopter in there to pick up the wounded soldiers, Hamilton’s plane started taking fire.

“I heard the rpm warning horn […] and looked at the gages and could tell we were losing power. We were going down. I remember we were drilled on emergency procedures and one of the things is always ‘lock your harness’. I can remember actually physically reaching down and locking my restraint harness, which seems kind of funny that I would remember that right in the middle of everything. My goal was to make sure that we didn’t hit on high ground and roll. So we went down and all of a sudden everything was dead quiet and still. Bob Sheehan in the backseat says, ‘You okay?’ and I said, ‘Yeah. You okay?’ and he says, ‘Let’s get out of here’. ”

Sheehan and Hamilton had to make sure to take all of their charts and frequency cards with them to prevent them from falling into the wrong hands. When they exited the aircraft they found the transmission laying on the ground beside it. The rotor had hit the side of the hill and shattered, ripping the transmission right out of the aircraft. “All of a sudden six Marines come crashing through the underbrush and startled the heck out of us. They said, ‘Follow us,’ so we followed them back up the hill to their reinforced platoon.”

It was then that they realized that had forgotten the KY-28 Radio, one of the first cipher radios that the military had. The troops had been lectured that the radio was more valuable than human life and that if the wrong people got the radio they would be privy to the military’s most confidential conversations. So Hamilton had to go back to the fallen Cobra and get it.

“Myself and about five or six Marines went down and I got in the tail boom of the aircraft and got the radio out. We went back up on the hill and I shared a foxhole with Lance Corporal Jesse Finch the rest of the night and got eaten up by mosquitos. I learned just how scared I could get that night and why I wanted to be back in the air and not on the ground. We got picked up the next morning and the best news was that the two guys who were wounded did great and survived. The only casualty was the one aircraft.”

After Vietnam, Hamilton returned to the States and spent three years as a flight instructor in Pensacola while taking science courses at the University of West Florida. In 1974 he was accepted to Case Western Reserve Dental School and was awarded a Navy Scholarship in 1975.  During his sophomore year, he was married to Martha Laine Wood of Finneytown.

Upon graduation, Hamilton was selected for a one-year hospital General Practice Residency. He then spent two years in Guam aboard the USS Huntley (AS-31) and the USS Proteus (AS-19) before being selected for a three year Oral and Maxillofacial Surgery Residency.

After completing his residency, he served for two years as Dental Department Head aboard the USS Midway (CV-41) homeported in Yokosuka, Japan.  “What was great about the tour was that, as an aviator, I was much more accepted than the average dentist was on board the carrier. We were at sea about 75 percent of the time […] in the Indian Ocean. I was married with two young daughters and it was difficult being away from them that much. [My wife and kids lived] in Japan.”

From Japan, Hamilton moved on to roles as the head of Oral and Maxillofacial Surgery at Naval Hospital Camp Pendleton and Naval Regional Dental Centre Pensacola. While in Pensacola he volunteered for Operation Desert Storm.

“I went to a movie in the afternoon. I came out and turned on the car radio and listened as George Bush made the decision to bomb Saddam Hussein's Iraqi forces. The next morning I told the Chief at the Dental Center to submit my name to go to Desert Storm. My family was still in California because the sale of our house fell through when the markets crashed after Saddam invaded Kuwait. I was already separated from my family, why separate someone else?”

Hamilton retired from the Navy in 1992. “By the time I left the military, I had 20 years of active duty and 26 years of total service.” His goal was to retire from the military before his kids went to high school so they wouldn’t have to deal with moving around during those formative years. It was then that his wife and daughters and came to Cincinnati and Hamilton purchased a private dental practice. He officially retired from the practice in 2016 after receiving an MBA from Xavier University in 2010.

These days, Hamilton keeps busy with projects for People Working Cooperatively and trips to Mississippi rehabbing homes with Sacred Heart Southern Missions. “I have been active in the Episcopal Church, Kiwanis, and I made three trips to rural Honduras to perform oral surgery,” said Hamilton. He was inducted into the Ohio Military Hall of Fame for Valor in 2016.

“I have a core of people from both the Marine Corps and the Navy all over the country that I am still very close with. We have shared many unique experiences. I am so fortunate to have been associated with such an amazing group of dedicated men and women.”

See more the Veterans History Project interviews at cinlib.org/vets, opens a new window. It houses a database of locally recorded interviews, documentary materials, and video streamed versions of selected interviews. The original documentary materials for the Library’s Veteran’s Archives are at the Downtown Main Library, which was dedicated as a Memorial Library when it opened in 1955.