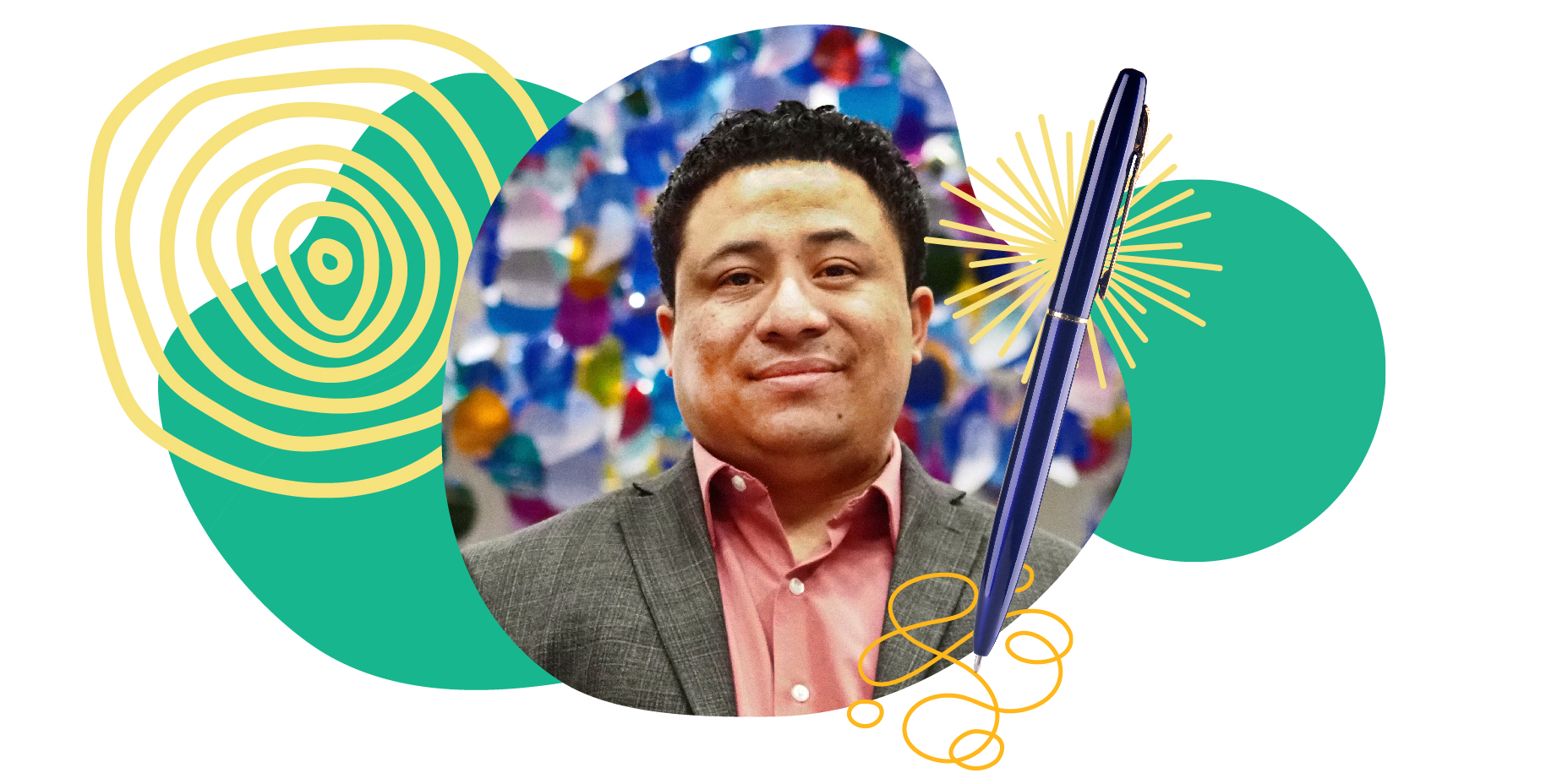 Our 2023 Writer-in-Residence, Manuel Iris, is a poet, essayist, and teacher. Attend his upcoming workshops and writers' office hours. And, listen to him as host of CHPL's "Inside the Writer's Head" podcast, opens a new window.

In 2016 I finally visited the Klementinum Library in Prague. It was beautiful and mysterious, although much better illuminated than my imagination had predicted every time I read The Secret Miracle, by Borges. In this story, a man named Jaromir Hladík searches this library for God, who can be found, according to the librarian's words, in one of the letters on one of the pages of one of the four hundred thousand volumes in the room. In dreams (this library is visited in dreams even while awake) the protagonist achieves a divine revelation and a secret miracle. I need not say that, although my experience was infinitely poorer than Hladík's, the memory of the Klementinum Library, surrounded by the streets through which Kafka walked, is still alive in my memory.

However, despite its beauty, the Klementinum was not an actual library for me. The reason is straightforward: I couldn't read in it. The groups of tourists, the guides explaining in several languages and at the same time the historical details of the site, the huge number of people posing for photos, and the prohibition of touching the books and even walking through the corridors made silence impossible. Time did not stop, as always happens, inside the library, but allowed itself to be invaded by the rush outside. Sadly, for me the Klementinum was not a library but a complicated and impenetrable statue, a monument.

My Youth was the Story of Many Borrowed Books

I remember in a much less reverent but more endearing way a small bookcase in the living room of my friend Luis's house in Mérida, Yucatán, when I was entering adolescence. His was the first house with books that I remember, and the atmosphere in it was different from others. I can, to this day, recall several of the titles and covers that I had in my hands there, with my friend.

I still remember, with endless gratitude, the libraries —the studios— in the houses of my friends Mariana and Juan Paulo. The two of them were brilliant, and they were also cousins. Their families exercised the pleasure of reading, and their parents permitted me to read even when my friends were not at home and to borrow books. In both of these houses, my reading was occasionally accompanied by something to eat (a courtesy I was always grateful for) or with some conversation about those same books. The kindness and generosity of both families changed my life forever.

There was also the library of Father Gallo, a Jesuit priest who then asked me to organize the bookshelves of the parish in my neighborhood where, in addition to religious books, there were several others of poetry, essays, and literature in general. Those were the ones I read. About those readings, he told me that each book was a part, and only a part, of the possible understanding of life. He also told me, at another time, that I was a writer. He was one of the first people to say such a thing, when I was very unsure about it. Of course, I never tidied up the parish library, which was even messier after my visits.

In general, my youth was the story of many borrowed books and multiple friends who opened the doors of their libraries to me. I was a boy without many resources to whom several people, at different times, gave the opportunity and the necessary space to read one more book. Perhaps for this reason, I am sure that a library is a place where one is always welcome.

Public Libraries of My City

Naturally, I also spent many hours in the public libraries of my city. I especially remember two of them. The first is still called the Manuel Cepeda Peraza Public Library and is in the heart of downtown. Its spacious and illuminated silence became my home many afternoons. I became a regular user who sometimes did not arrive to read but to just be there, among books, in silence. I went there to think, to recharge myself with a type of energy that I could not find in other places. The same thing happened when I went to the central library of the Autonomous University of Yucatan, not far from the first one, which also had the luxury of air conditioning.

Little by little, I realized that libraries, and especially public libraries, are the most inclusive space that our societies have built: no one can remove anyone else from a library because they do not share the same ideology, nor is it necessary to believe —or not believe— in anything to gain access to a library. Surrounded by the words of other people who have worried about the same things or experienced similar circumstances at different times, whoever visits a library finds company. Depending on the occasion, a library can be a remedy for loneliness, or a space for solitude.

Every library in the world creates a community between the voices of all places, of all people, from all perspectives from before and now: the entire humanity is in dialogue with itself. Also, libraries are one of the very few places in contemporary society that do not expect money from those who visit it: they give, nurture, and provide, and they do it for free. We are all equal inside a library, and for this reason they are a sanctuary of our dignity. 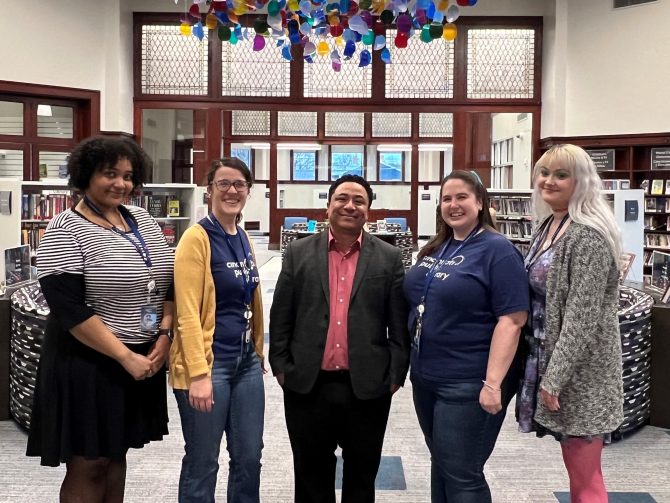 In the United States I have known public and private library systems with resources so extensive that can be (wonderfully) overwhelming, inexhaustible. The Cincinnati & Hamilton County Public Library is one example I am proud to mention and represent this year. Its digital and face-to-face resources, events, programming, services and ever-growing collection go far beyond the gathering and organization of books, audiobooks, films, documents, magazines, or databases... The 41 library locations are points of community building. The staff that make this system possible are dedicated, intelligent, admirable. They understand that their job is not to collect and store knowledge but to create bridges and defend humanity from its own dangers. I am, and we should all be, very grateful to them.

I am happy to live in a city with an exemplary library system, and to be able to do my part to invite more people to get to know others, and themselves, in their spaces and services. The young man I was can only reciprocate the generosity that so many showed me. In the end, all libraries are extensions of memory, sites designed to battle oblivion, places that we can enter to find or keep what we love. With that emotion we have to approach its doors, which will always be doors that open into ourselves.