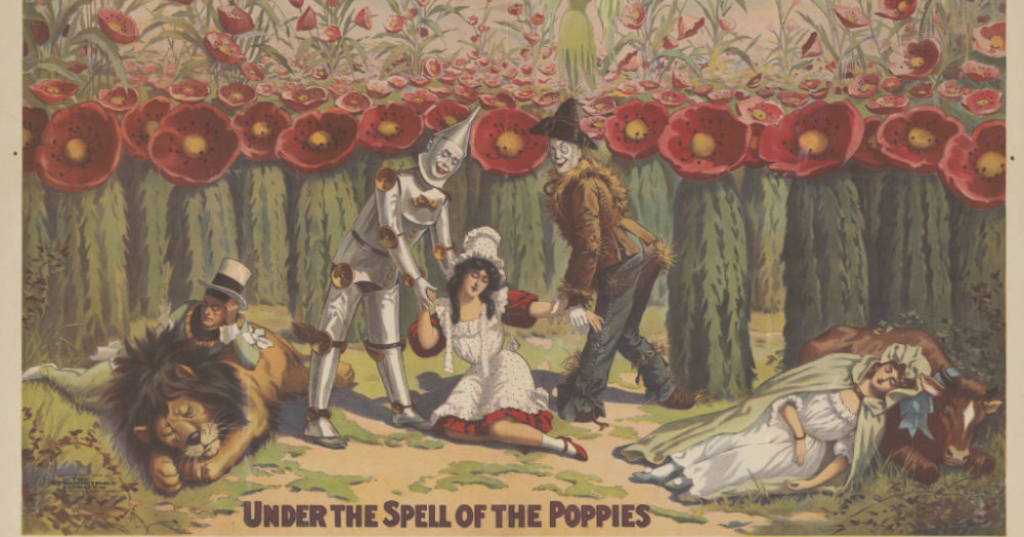 Most of us are familiar with the 1939 MGM film starring Judy Garland, but Cincinnatians were able to see The Wizard of Oz live on stage as early as 1905.

In 1900, L. Frank Baum published The Wonderful Wizard of Oz. This illustrated, “modernized fairy tale” for children stars Dorothy, a farm girl from Kansas. Swept away in a cyclone to the fantastical land of Oz, she and her dog Toto encounter munchkins, witches, and flying monkeys. Along with the Scarecrow, Tin Man, and Cowardly Lion, Dorothy travels the yellow brick road to see the Wizard (who turns out to be a fraud). Dorothy then inadvertently slays the Wicked Witch of the West using a bucket of water.

The novel was wildly successful. The following year, Baum began adapting it as a musical for adults. Creative differences during production resulted in a significant deviation from the book. New characters appeared, such as Pastoria, the “rightful king of Oz,” and his fiancée Tryxie, a waitress from Topeka. Pastoria’s efforts to incite a political revolt and depose the Wizard often overshadowed Dorothy’s storyline. Imogene the Cow, played by a human actor, replaced Toto. Regardless, The Wizard of Oz premiered in Chicago in 1902. It became a smash hit and opened on Broadway. The show then toured until 1909. 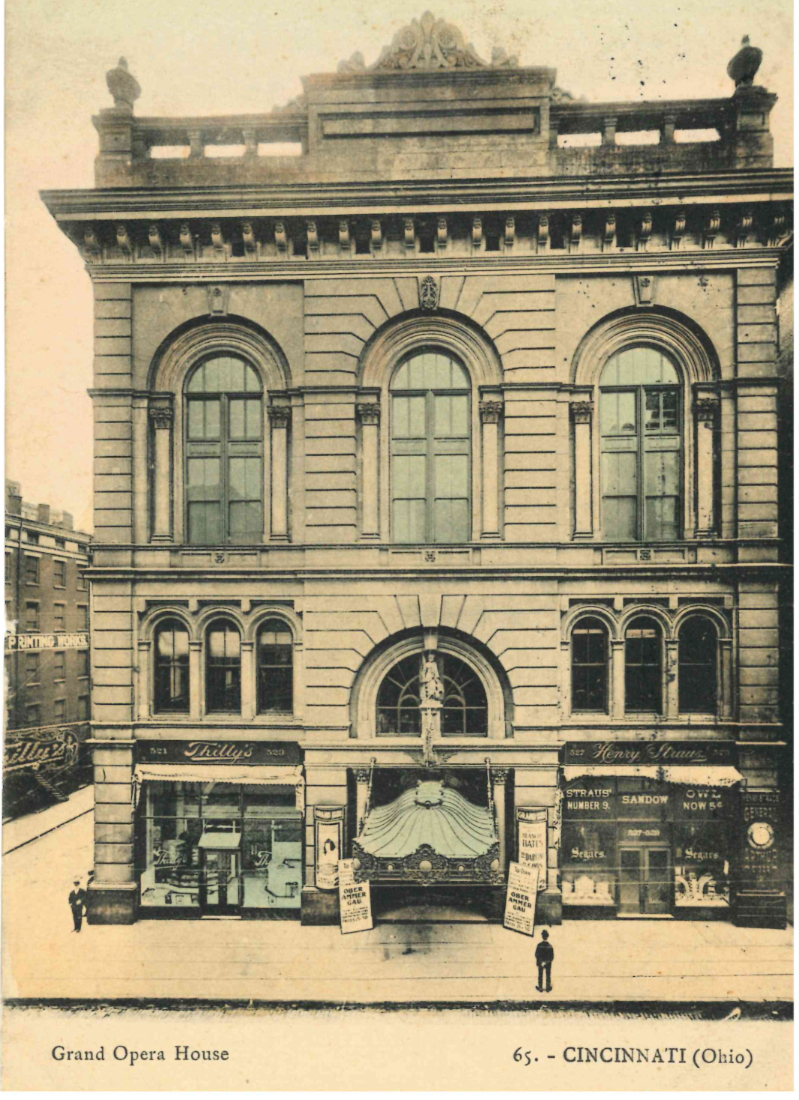 The Wizard of Oz opened in Cincinnati at the Grand Opera House on New Year’s Day, 1905. David Sinton, Taft Museum of Art founder Anna Sinton Taft’s father, created the Grand. It was situated on Vine Street between 5th and 6th streets. In the 1870s, Sinton acquired the building that housed Mozart Hall, a music venue, along with other businesses, including a gym. He converted it into the prestigious Grand Opera House, Cincinnati’s premier theater until it burned to the ground during a production of Hamlet in 1901.

Quickly rebuilt to resemble the original, the Grand re-opened in 1902. It became a movie theater in the 1930s and was finally demolished in 1975. Cincinnati’s central business district was once home to dozens of theaters and cinemas. Only the Taft Theatre, named after Charles Phelps Taft, remains from that early era. 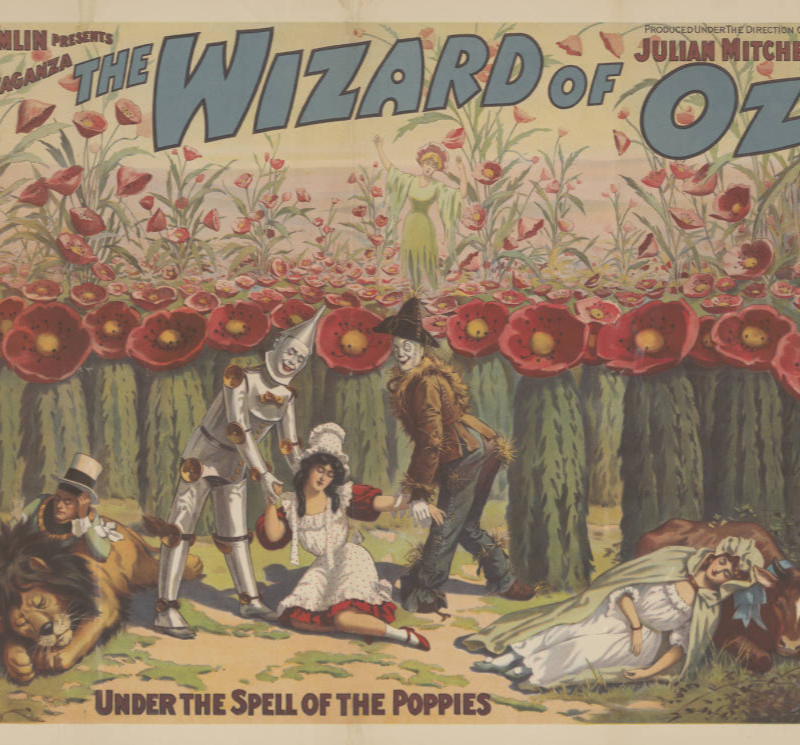 The Strobridge Lithographing Company, The Wizard of Oz, 1904, color lithograph on paper, 30 x 39 15/16 in., one sheet. From the Collection of The Public Library of Cincinnati and Hamilton County, ST-0372

Escape from the Enchanted Poppies

In 1904, the Cincinnati firm Strobridge Lithographing Company printed this advertisement for The Wizard of Oz musical. The ad comes from the Cincinnati & Hamilton County Public Library's collection. At the center, the scent of poppies, embodied in the musical by chorus girls wearing flower costumes, lulls Dorothy to sleep. The Scarecrow and Tin Man, unaffected because they cannot smell, attempt to wake her. The three are joined by the slumbering Lion and Pastoria at left, and Tryxie and Imogene the Cow at right.

In Baum’s novel, an army of mice carries Dorothy away from the poppy field to safety. However, producers of the 1902 stage version determined that a mass of rodents onstage would be visually unappealing. Instead, Dorothy mumbled in her sleep, activating a magic ring from Locusta, the Witch of the North. Locusta then conjured a sudden snowfall, destroying the poppies and breaking their spell. The snowfall also appears in the 1939 movie version.

In the novel, Dorothy acquires her famous shoes from the Wicked Witch of the East’s corpse after Dorothy’s house falls on her. Later, the slippers magically transport Toto and Dorothy back home to Kansas when she claps them together three times. Baum originally described the shoes as silver.

One of the screenwriters working on the 1939 film invented the iconic ruby slippers. They figured that red would contrast with the yellow brick road better than silver on screen. Neither the magic slippers nor the yellow brick road appears in the 1902 stage adaptation. The red footwear Dorothy wears on the Strobridge poster is coincidental.

See The Wizard of Oz poster in the Taft Museum of Art’s Sinton Gallery during Magic & Melodrama: Cincinnati Posters from the Gilded Age, opens a new window, May 3 through August 18, 2019. All of the posters in this enchanting exhibit come from the Public Library of Cincinnati and Hamilton County’s extensive collection.

You can go to the Taft Museum of Art for free by checking out one of the Library’s Discovery Passes. Discovery Passes provide library cardholders with free tickets to arts, cultural, and recreational attractions throughout Hamilton County. In addition to the Taft Museum, you can access The American Sign Museum, Cincinnati Art Museum Special Exhibitions, The Harriet Beecher Stowe House and more. Use the online reservation system to reserve a pass.

Printed with permission of the Taft Museum of Art, opens a new window.