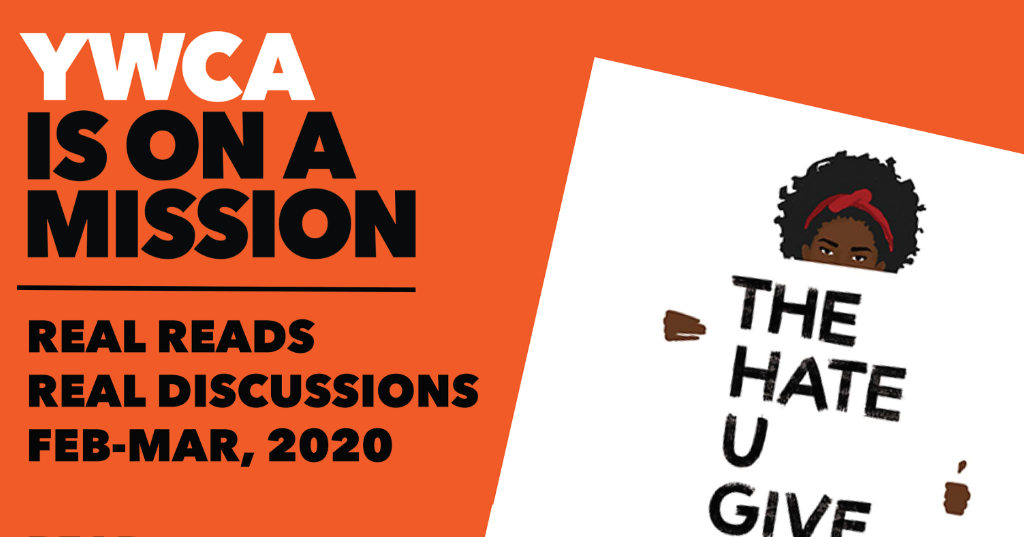 The YWCA, opens a new window is on a mission to get Greater Cincinnati reflecting, discussing, and combatting the effects of interpersonal and structural racism. To do that, they’re turning to books. The Library is proud to join the YWCA with Joseph-Beth Booksellers, The Mercantile Library, Kids4Peace, and Norwood Together to bring to life the citywide bookclub YWCA Real Reads.

“The Hate U Give, opens a new window by Angie Thomas was the perfect book to kick off this initiative,” said Executive Coordinator Yvette Johnson-Hegge. “It’s an engaging story that is both timely and important. It addresses systemic racism and police brutality head-on, and aligns with our focus on ending racial and religious profiling.”

The Hate U Give examines the complexities of race in America through the story of sixteen-year-old Starr Carter, whose world is shattered when she becomes a key witness in the shooting of her childhood best friend Khalil at the hands of a police officer.

The YWCA Real Reads book discussions grew out of internal discussions the YWCA has held for years with Board members, Academy of Career Women, and Rising Stars. They were developed to allow discussion of racial justice issues in a safe space that result in real conversations and deeper connections and understanding.

“After some strategic planning, our Racial Justice Committee broke into three workgroups to greater extend our efforts,” said Johnson-Hegge. “The group working to End Racial & Religious Profiling decided to expand these book discussions to the greater community so that they too could benefit from this sort of in-depth discussion of important and timely issues. We reached out to David Siders at the Public Library of Cincinnati and Hamilton County and started discussing how we could reach the greatest number of people. Other wonderful partners followed.”

The goal? To get the entire Cincinnati regional community to read, talk, and listen to others. “We want folks to really engage in some deep thought about the effects of structural racism,” said Johnson-Hegge. “We want to provide an opportunity for attendees at these discussions to understand each other and connect across differences. We want to encourage everyone to stand together and speak out against injustice.”

The YWCA’s mission is to eliminate racism, empower women and promote peace, justice, freedom, and dignity for all. “That’s a very lofty goal, but one that we work on tirelessly every day,” said Johnson-Hegge. “We are currently focusing our racial justice work on three key components: Voting Rights and Getting Out the Vote, Restorative Justice Practices in Schools, and Ending Racial and Religious Profiling. Real Reads will not only provide community education on the effects of racial profiling but will also help build support for needed changes in our systems.”

Unfortunately, while the story of Starr Carter is fictional, it reflects the very real situations all too common in Black and Brown communities across the United States. “The killing of Timothy Thomas and Sam Dubois by police are proof that Cincinnati has not been immune to horrific cases of police violence against people of color,” notes Johnson-Hegge. “The Hate U Give provides an inside look into the effects on communities of color when structural racism and bias lead to police violence.”

You can reserve your copy of The Hate U Give, opens a new window at any of your branch libraries here. We hope you’ll join us at one of the discussions listed below as we work together as a community to dismantle the structural racism that plagues our community and society at large, creating a world made up of equality and justice for all.