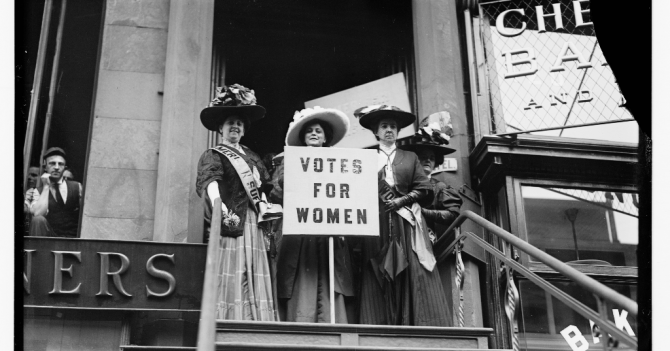 It’s hard to believe it’s been 100 years since the 19th Amendment gave many women (but not all, more on that in a moment) the right to vote for the first time in 1920. It was a struggle that was more than 72 years in the making.

So much progress has been made since the landmark kickoff to the movement, the Seneca Falls Convention of 1848. Yet there is so much work left to be done to create an equitable world where sex and gender identity are not a limitation for equality and justice.

Centennial celebrations of women’s suffrage are taking place across the country this year. Here at the Library, we’re hosting two powerful exhibits that highlight both the triumphs and the shortcomings of the Women’s Suffrage Movement, zooming in on the contributions of women with ties to Ohio.

The first exhibit, Ohio Women Vote: 100 Years of Change is on view now through February 27 on the second-floor connector at the Downtown Main Library. Presented by Ohio History Connections, this moving exhibit curated by Lisa Wood is traveling throughout the state during 2020.

“Through the lens of activism, intersectionality, and women using their voice, this celebration will look not only at the path taken by women to achieve the right to vote, but also the history of civic action led by women throughout American history,” said Ohio History Connection. “[The exhibit] explore[s] how current issues are connected to stories of the past, and invite[s] others to tell their own stories.”

The second exhibit, Genius of Liberty: The Long Struggle for Women’s Equality, is on display in the Joseph S. Stern, Jr. Cincinnati Room at the Downtown Main Library from January 31 – April 26. The exhibit casts light on the crucial yet forgotten role played by Ohio from abolition to ratification and is named for The Genius of Liberty, one of the first feminist publications in the United States, published by Cincinnati suffragist Elizabeth Aldrich.

“Few copies of this publication have survived to the present day but you can see some issues in the exhibit,” said Katherine Durack, an independent scholar, former Miami University faculty member, and host of the “Genius of Liberty” podcast series.

Genius of Liberty was curated by Reference Librarians Diane Mallstrom and Christopher Smith, along with Durack, whose podcasts are available at MercantileLibrary.com/GeniusofLiberty/.

Both of the exhibits commit to portraying whole truths and including the experiences of all femme and female-identifying races, ethnicities, socio-economic statuses, gender identities, nationalities, ages, religions, abilities, and sexual orientations.

This approach is often called “intersectionality.” Intersectionality is a theory put forward in 1989 by Kimberlé Crenshaw who states in her article “Mapping the Margins” that “intersectionality offers a way of mediating the tension between assertions of multiple identities and the ongoing necessity of group politics. Intersectionality allows for the reality that as women, we share a gender, but also inhabit many other identities including race, class, sexuality, ability, and so much more. As women, we share a gender but we are not equally affected by the ways of the world, and as feminists, we need to acknowledge and accommodate these differences.”

All too often the history surrounding the 19th Amendment is whitewashed, with historians and textbooks reluctant to discuss the racism and other prejudices that plagued what is sometimes referred to as first-wave feminism.

For example, women’s suffrage icon Susan B. Anthony is often praised as both an abolitionist and a women’s rights advocate who was friends with Fredrick Douglass. What is often left out of the narrative is that this friendship soured when Anthony could not reconcile her disdain for the idea of African American men getting the right to vote before white women. She is quoted as saying, “I will cut off this right arm of mine before I will ever work or demand the ballot for the Negro and not the woman.”

When suffragists gathered at the historic meeting in Seneca Falls, New York, in July 1848, they only advocated for the right of white women to vote, notes Tammy L. Brown, associate professor of Black World Studies, History, and Global and Intercultural Studies at Miami University. “The participants were middle-and upper-class white women, a cadre of white men supporters and one African-American male — Frederick Douglass. […] No Black women attended the convention. None were invited.”

Many prominent white women of the Suffrage Movement not only failed to recognize the dual oppression of racism and sexism faced by women of color, Black women in particular, but repeatedly barred them from their activism and organizing.

In 1851, abolitionist and women’s rights activist Sojourner Truth gave her iconic, off-the-cuff “Ain’t I a Woman” speech at the Ohio Women’s Rights Convention, addressing racial inequity within in the movement. The speech was published a month later in the Ohio newspaper The Anti-Slavery Bugle. Truth also held the abolitionist movement accountable, demanding that the fight for civil rights include Black women as well as men.

Mary Church Terrell was another key figure who took an intersectional approach to women’s liberation. Born to former slaves, Terrell earned her bachelor's and master’s degrees from Oberlin College in Ohio and went on to speak about the intersections of gender and race at the National American Women Suffrage Association Convention in Washington, D.C., in 1898.

Chinese American Dr. Mabel Ping-Hua Lee mobilized the Chinese community in America to support women’s right to vote. She even attended a 1912 suffragist parade in New York City on horseback. Due to the Chinese Exclusion Act of 1882, it wouldn't be until 1943 that Chinese women like Mabel would be considered citizens with the right to vote. Yet she and other Asian suffragists fought for the 19th Amendment anyway.

Journalist, anti-lynching activist, and suffragist Ida B. Wells organized the Alpha Suffrage Club for African American women in Chicago. When it came time for the group to participate in the 1913 women’s suffrage parade in Washington, D.C., the white organizers of the march told the group they had to march at the back of the parade. Wells told the all-white Illinois delegation that they would march together or not at all. The white women refused to budge. When the parade began, Wells boldly stepped out of the crowd of spectators and marched with the Illinois delegation, refusing to bow to segregation.

The first novel written by a Latina woman in English was published in 1872 by María Amparo Ruiz de Burton. Her book Who Would Have Thought It? offered scathing commentary on American racism and supported women’s suffrage.

Hallie Quinn Brown was from Wilberforce, Ohio. She was a member of the National Association of Colored Women, whose national chapters included Harriet Tubman, poet Francis E.W. Harper, and the first female millionaire, Madame C.J. Walker. Brown fought for civil rights and woman suffrage before and after the 19th Amendment was passed.

Some white women, it should be noted, like Lucy Stone, broke with Susan B. Anthony and Elizabeth Cady Stanton’s National Woman Suffrage Association over the passage of the 14th and 15th amendments that granted (at least on paper) voting rights to Black men but not women. Stone felt the amendments should be supported because they aligned with her abolitionist goals and didn’t think it would impair the fight for women’s suffrage. Anthony and Stanton disagreed. So, Stone, Julia Ward Howe, and others formed the American Woman Suffrage Association, which was also not without its flaws.

Despite the eventual passage of the 19th Amendment in 1920, it wouldn’t be until well after the Voting Rights Act of 1965 that a majority of African American, Latina, Indigenous, Asian, and other women of color were fully enfranchised to vote, despite long having the right under the law.

Indigenous people wouldn't become recognized as citizens until 1924 - four years after the ratification of the 19th Amendment. They and many other marginalized communities have faced voter suppression at the polls as recently as 2018. According to an article, opens a new window in the Independent, some of the early suffragists like Stanton and Anthony were deeply impacted by the matrilineal culture of the Haudenosaunee (Iroquois Confederacy). "Many of the suffragists interacted with Native women and saw the political power and respect they received," said Dr. Sally Roesch Wagner, who received one of the first doctorates in the country for women's studies. This exposure played a large role in shaping their vision of women's equality. This history is rarely discussed.

No matter all its myriad shortcomings, it is undeniable that the fight for the passage of the 19th Amendment marks an important time in history. It represents an imperfect starting point for other women’s liberation struggles that have followed. Each of these exhibits seeks to highlight that our path forward must be rooted in intersectional thinking and action if we are to win the fight for liberation for all, while underscoring the importance of reflecting on the history that has brought us where we are today.