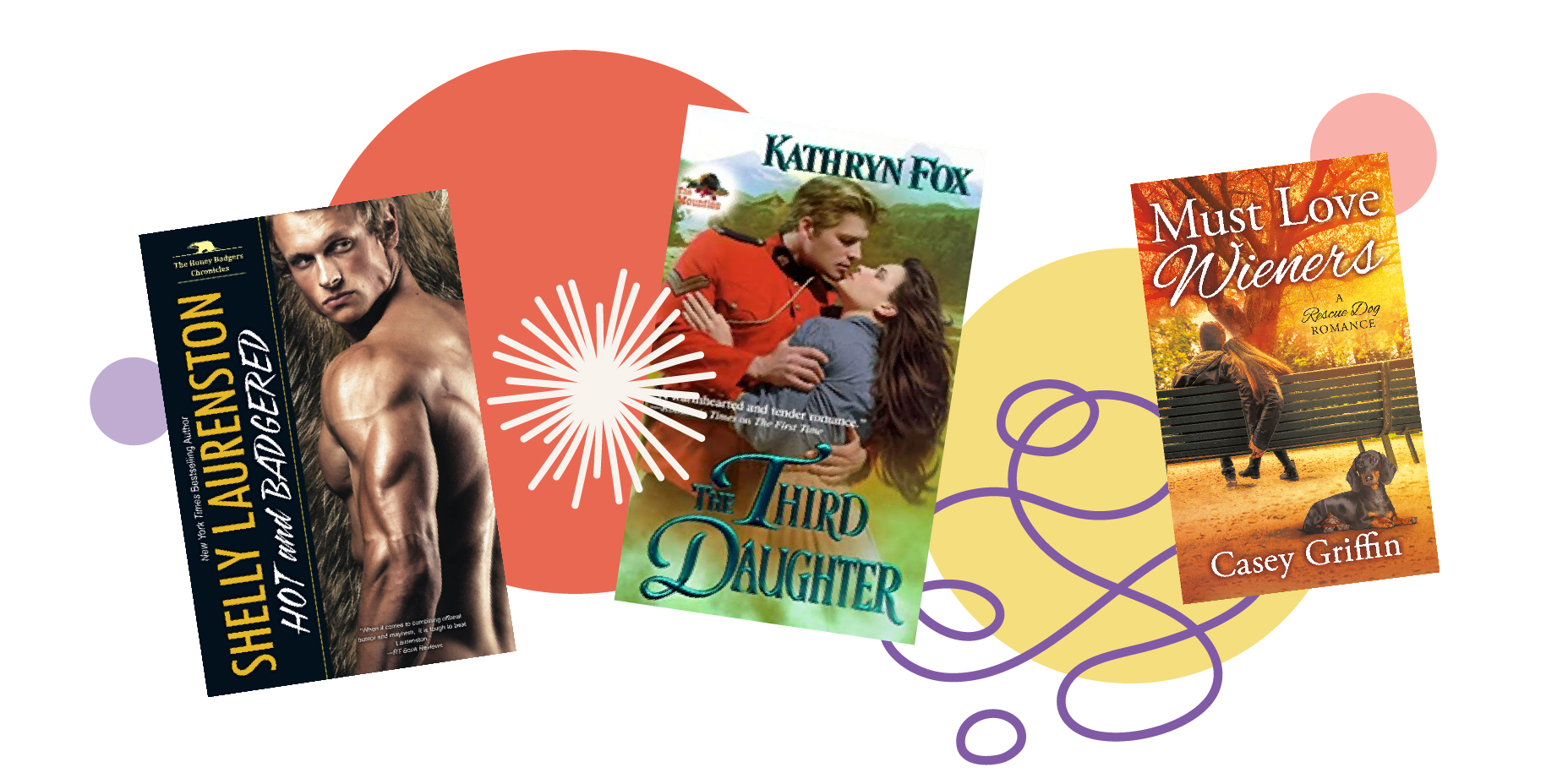 Hurrying down to A-stacks on a fresh assignment, I tackle it with a passion akin to love. Perhaps it was the arrow shot into my brain by some giddy imaginary cherubim. In the past, I have unearthed some odd books and strange vinyl records, but this time, my assignment was a little more specific. I was giddy at what I might discover.

In preparation for Valentine’s Day, I’ve been asked to excavate some of the weirdest romance novels owned by the Library. No offense to the romance genre, but it can be pretty weird. Which is a good thing! After all, the Library is for minds of all kinds.

The romance genre is known for its variety of sub-genres including historical, suspense, Regency, erotica, and paranormal. But how many of you know (and are prepared to know) that there is a hot new sub-genre that is sweeping men and women off their feet and it involves honey badgers? Shapeshifting honey badgers to be fair.

Hot and Badgered by Shelly Laurenston is what happens when a beautiful naked lady falls from the sky and lands on the hotel balcony of a grizzly shapeshifter. Yes, you read that right. Also, some of the honey badgers can also shift into werewolves in case lycanthropes are more your thing than Mellivora capensis.

Does shapeshifting stretch out your skin or squish your internal organs or break your bones? I have so many questions starting with just how romantic are honey badgers? I’ve been attacked by one on a hiking trail and I did not return their call.

Now, we all know that vampires are irresistible. After all, they can hypnotize people. But ever since The Vampyre by Dr. John Polidori (Lord Byron’s friend), vampires have stolen hearts and blood. Then there’s the Amish. In 2011, someone had an original idea: Amish romance. Plain Fear: Forsaken by Leanna Ellis shows us that even Amish fiction can have teeth.

The romance genre has plenty of motifs and reoccurring character archetypes. Male love interests always own a yacht, as if that is the pinnacle of romantic possessions. They have bad boy tendencies, too. If that piques your interest, pick up Cherry Adair’s “Cutter Cay” series. In Stormchaser, romance brews between bullet battles and deep-sea dives to the lost city of Atlantis, another familiar romance genre obsession.

Imagine a friend asking you this riddle: What has six legs, but only walks on four when in love? I would imagine most of you would answer an ant or some other type of insect. Then your friend would laugh at you and hand you a copy of P.C. Cast's Brighid's Quest. You would learn the correct answer is a human in love with a centaur.

My Give A Damn's Busted

Every cowboy wants to rule the world. Or, at least, our hearts. There are cowboy romances of all kinds: Christmas cowboys, cowboys with babies, cowboys that are also tennis players, cowboys in space with laser hats. But Carolyn Brown sums it up best with My Give A-Damn’s Busted. Can’t argue with that.

If cowboys don’t flutter your heart, may I suggest Canadian Mounties? Kathryn Fox has you covered with The Third Daughter and The Second Vow.

The Lady Travelers Guide to Larceny With A Dashing Stranger

Long titles are another common staple in the romance genre. I guess the authors just want to clue in readers on what to expect. For example, Victoria Alexander gives us the Lady Travelers Guide to Larceny with a Dashing Stranger. Not a foppish stranger. Seductive stranger is too strong and aggressive. But dashing is just right and a pun too. Want to bet the author gives the male character black and white hair like a dash of salt and pepper?

Metropolis by Fritz Lang is one of my favorite movies, so much so I made my own soundtrack for it. So, I was completely thrown off guard when I discovered that Carole Nelson Douglas wrote Virtual Virgin in which a nearly perfect replica of the Metropolis robot sways between teenage innocence and carnal depravity all while fighting a drug lord.

Then there is Thong on Fire by Noire. Some like it hot (Nelly) and some actually like pyromancy. I once found this book outside of my apartment in Clifton, just lying in the grass soaking in the sun. I guess it was too hot to handle.

Must Love Wieners by Casey Griffin. Sometimes the titles speak for themselves.

Interested in more offbeat recommendations from our staff? Ask a Librarian now. The Popular Library at the Downtown Main Library is open for browsing at this time, though for safe, quick service, please make materials requests ahead of your visit.